Democrats have mixed feelings about the results of the Mueller investigation.

Attorney General William Barr’s summaryof special counsel Robert Mueller’s report finding no evidence of collusion between the Trump campaign and Russia during the 2016 election has elicited a range of responses.

Democratic lawmakers in Washington, D.C., aredemanding that Barr release the full reportand testify before a congressional panel. Meanwhile, in Magna, Utah, a group of Democratic voters gathered early Tuesday at the Brew Monkey Coffee House and Deli to discuss the report. 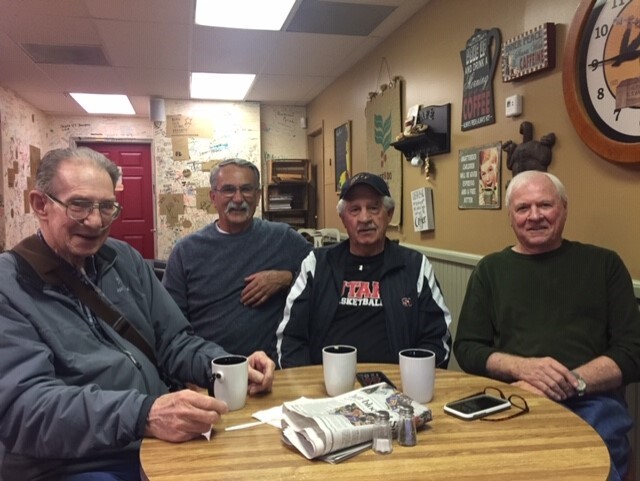 A group of Democratic voters gathered March 26 in Magna, Utah, to discuss the Mueller report.

The general consensus among the men, who asked that their names not be used to speak candidly, was that the Justice Department’s findings were far from the “complete and total exoneration” that President Trump claims.

“I think it’s a cover-up,” one man said. “I’m going to tell you why. We have learned, Trump doesn’t pay his taxes. He doesn’t do anything legal. But yet, they think he’s going to be a legal president? I don’t think so. I disagree with that.”

Another man said he always knew the report would come to nothing because Mueller is a registered Republican.

“No collusion?” asked another. “First [Trump] stands up and holds up the emails and says, ‘Are you listening, Russia?’ Then he fires [Comey] and doesn’t have the balls to fire him in person because he’d kick [Trump’s] ass.”

I asked the group whether, now that the report has been released, it was time for Democrats to move on. The general feeling was that they should not.

“Let’s see the report and what comes out,” said one of the men.

“What they really need to do is subpoena Mueller,” said another. “I want to hear from him. I don’t trust Barr. How can you go over that many days of testimony and come to a conclusion in a day and a half. Bullshit.”

Shortly after our discussion at the coffee shop ended, Barr announced that the full Mueller report would bepublicly released within weeks.

My focus group consisted of eight men, all Democrats in their 60s, 70s, and 80s, including the mayor of Magna. Their friendships with one another stretch back to childhood, and they mixed political talk with reminiscences from high school basketball games and other events from their youth.

A close-knit working class community, Magna is a former copper mining town a few miles west of Salt Lake City. It is represented by Republicans in the U.S. House and state Senate, and by a Democrat in the state House. “Make no mistake,” one man said. “This is a Democratic community, without a doubt.”

Later, two other men joined our discussion, with one questioning Mueller’s impartiality. “He’s a lifelong Republican, don’t forget that,” he said. “And all these Republicans are telling him, ’You’re going to make America look bad if the president of the United States is a crook. We only have another year and a half left. We need to let this go.’ That’s what I think happened.”

The group also offered their opinions on a variety of other topics — from the new tax law (“a scam”), to the strong economy (credit: former President Barack Obama), to the border wall (“a waste of money”) — before turning to Trump’s character and which Democrat has the best chance to beat him in 2020.

“I served in the Army and the president is commander in chief,” one guy announced. “And I’m a good Democrat. There’s a lot of presidents I didn’t care for, but they’re still commander in chief. This has been the first one that I am ashamed of. Some of the things he’s done, the things he’s said. I wasn’t a Ronald Reagan fan, but I bet when [Trump] walked into the Oval Office the first time, Ronald Reagan spun in his grave like a windmill.”

“He’s shameless in his lying,” another said of Trump. “They think Reagan was the Teflon president. They should look at Trump. Nothing sticks to him.”

“We’re even loving Mitt Romney at this point,” one man said of the Utah Republican senator who at times has acted as a foil to Trump. “Didn’t think we’d ever say that!”

“But at least he’s civil,” another added. “We’d take George W. Bush in a heartbeat.”

“Didn’t think we’d ever say that!” the first repeated.

“It’s so bad. I think Nixon would be better than Trump,” a third man said.

Some of the men seemed nervous about Democrats’ chances of beating Trump in 2020.

“He’s a damn good person. He’s had disasters in his life. He never goes after people personally.”

“He’s a hell of a contrast to that idiot in there, and he’s the right guy.”

We returned to the Mueller report near the end of our discussion. I asked the group whether they'd support further investigations by Democrats.

"I don't think so," one man said. "It'll hurt them because it’ll look like sour grapes."

“If they want to call for another report or call another investigation, fine, but don’t focus everything on it,” another man cautioned. “Don’t let everything else go.”