Members ofJoe Biden'sinner circle are becoming increasingly convinced the Bernie Sanders' campaign is behind at least one of theexplosive accusations of physical misconductrecently leveled against the former vice president -- and, in the words of one prominent backer, Biden is now "ready to kill Bernie."

In an article on Friday, former Nevada lieutenant governor candidateLucy Floresaccused Biden of inappropriate sexual conduct during a 2014 campaign event, saying Biden "plant[ed] a big slow kiss on the back of my head."

Flores endorsed Sanders in a 2016 Facebook post, served on the board of the Sanders-aligned Our Revolution group, and campaigned publicly on his behalf. She has also appeared at a rally for Democratic presidential contender Beto O'Rourke.

Biden has strongly denied acting inappropriately around women. And in a dramatic, tension-raising moment, a top Democratic source openly told The Daily Beast on Tuesday that Biden's team thinks the story, which was followed by another similar account from a Connecticut woman, was "coming out of Bernie world.” 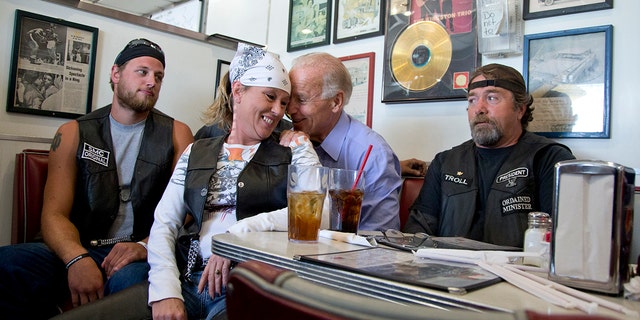 In this Sept. 9, 2012, file photo, Vice President Joe Biden talks to customers, including a woman who pulled up her chair in front of the bench Biden was sitting on, during a stop at Cruisers Diner in Seaman, Ohio. (AP Photo/Carolyn Kaster, File)

But Sanders campaign manager Faiz Shakir strongly denied any suggestion that the senator’s team or its allies were behind the Flores story, and directed Fox News to an earlier statement on the matter.

“Neither the Bernie Sanders campaign, nor anyone involved in it, planted, planned, persuaded, cajoled or otherwise urged Lucy Flores or anyone else to tell their story. Full stop, period, end of sentence. I don’t want to hear it. We didn’t play a role,” Shakir said.

“But this is why my blood boils,” he added. “We have heard through innuendo and rumors that somehow this campaign was involved in Lucy Flores telling her story, and it is deeply disrespectful and shameful that any time a woman comes forward to tell her story there has to be some kind of intimation or suggestion that that person is doing so out of some political agenda and or that the person may be lying."

Shakir continued: "We went through the Donald Trump campaign in which a number of women came forward to tell their stories and they were dismissed and criticized and ripped by the president of the United States on the highest stage of the land. We saw it with Dr. Christine Blasey Ford, that she must be a Dianne Feinstein plant. It is dismissive and disrespectful that whenever a woman comes forward the first suggestion is that there has to be a political agenda driving them.”

In hisown fiery statement on Monday, a Biden spokesman pushed back on the accusations made against the vice president, saying many photos of Biden have been misinterpreted -- even according to some of the women who appear in them -- while others were blatant "smears and forgeries."

But the spokesman, Bill Russo, specifically criticizied "right-wing trolls," and left no hint he was referring to Sanders.

In response, House Speaker Nancy Pelosi signaled that Biden's issues weren't disqualifing -- even as sheoffered some unsolicited advicefor how he can avoid ending up in any other "inappropriate" situations.

The episode wasn't the first time Sanders' team has publicly quarreled with other Democrats. Earlier this year, a top Sanders advisercalled Hillary Clinton's team members among the "biggest a--holes in American politics"and said neither Clinton nor her staff were "nice people."