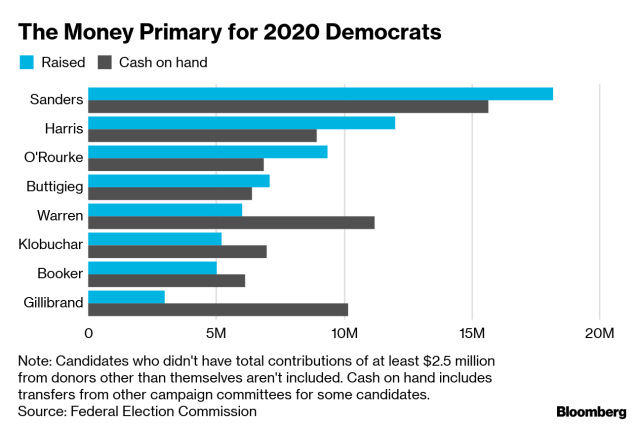 Fundraising totals for 2020 candidates show the advantage of being an incumbent president -- and the challenge for Democrats, who are raising less money and still have to compete among themselves before taking on Donald Trump.

The Trump campaign and joint fundraising committees ended the first quarter with $48.9 million in the bank, more than three times as much as any of the potential challengers in a crowded Democratic field, according to disclosures filed with the U.S. Federal Election Commission Monday.

The first-quarter filings offer early evidence of who’s generating buzz among Democratic grassroots donors as the party distances itself from big money and instead woos those who give in small amounts online. Bernie Sanders led all Democratic contenders in fundraising, fueled by small-dollar donors, while New Jersey Senator Cory Booker and his colleague from New York, Kirsten Gillibrand, struggled to raise a significant share of their money that way.

Democrats face a series of expensive nominating contests early next year, while Trump -- whose approval ratings are well below 50 percent -- has the luxury of focusing on building a war chest for the general election -- still more than 18 months away.

Sanders, who leads with $18.2 million raised and has $15.7 million in cash on hand, started with a massive fundraising advantage because of the list of supporters he’s maintained from his failed 2016 bid against Hillary Clinton for the Democratic presidential nomination.

The Democratic senator from Vermont got 84 percent of his donations from small-dollar contributions, according to his filing. The self-described democratic socialist, who also leads in polling among declared candidates, spent $5 million in the same period.

The Democratic fundraising leaders after Sanders are California Senator Kamala Harris, former Texas Congressman Beto O’Rourke and Pete Buttigieg, the mayor of South Bend, Indiana. The field is expected to eventually number 20 or more candidates including former vice president Joe Biden, who may have delayed his entry into the race until after the end of March to avoid a spotlight on his first-quarter fundraising. Biden has told friends he’s likely to announce a bid later this month.

Booker raised just 16 percent of his contributions from small-dollar donors, while Gillibrand raised 16.7 percent of her money in amounts of $200 or less during the first quarter, the filings show.

While some Democrats have struggled with small-dollar donor support, they’ve been a boon to Trump, largely because he has the field of conservative contributors to himself.

“He’s the only hand in this particular pie of donors,” said Matt Grossmann, a political science professor at Michigan State University, “whereas Democrats are fighting over the same group of people.”

Trump has been on a fundraising tear since winning the White House, fueled largely by small-dollar donors, He raised $127.2 million in his first two years in office and has picked up the pace in 2019.

Trump’s committees raised $21.4 million from donors giving $200 or less in the first quarter, or 56 percent of the total. His campaign uses frequent texts and emails to rally his base on issues ranging from building a border wall to attacking Special Counsel Robert Mueller’s investigation of Russian interference in the 2016 election, while asking for a contribution -- sometimes as little as $3.

"He’s been raising money nonstop since 2016," said Dan Eberhart, chief executive officer of oil services firm Canary Drilling Services LLC and a leading GOP donor. "That early commitment has given him a huge edge over Democrats."

The top vendor was American Made Media Consultants LLC, an in-house ad buying company, which took in $3 million in payments for online and other advertising expenses, followed by law firm Jones Day at $1.3 million. Ace Specialties LLC, which distributes, among other things, the official “Make America Great Again” caps, was paid $951,481.

Trump Victory, which raises money from big contributors, reported raising $8.2 million, including $100,000 given by Las Vegas entrepreneur Phil Ruffin, a longtime Trump ally, and his wife Oleksandra Nikolayenko-Ruffin. The big-dollar donations are likely to increase. In April, Trump began hosting high-dollar fundraisers, including an event in Los Angeles for which the top ticket cost $150,000.

Some Democrats moved quickly to use Trump’s fundraising news to seek fresh donations. Kamala Harris sent out an e-mail solicitation seeking more money for her campaign Monday evening, highlighting the $30 million Trump raised during the quarter. Only about 37 percent of Harris’s contributions during the quarter were in amounts of $200 or less.

Elizabeth Warren, a Senator from Massachusetts, collected about 70 percent of her contributions in amounts of $200 or less, the filings show. While that’s a higher proportion than many of her contenders, her overall fundraising total lagged others who had declared their intentions to run even later than she did.

Warren started the second quarter with $11.2 million in the bank after spending $5.3 million during the first three months. She transferred $10.4 million from her Senate campaign committee. The $6 million she collected in contributions wasn’t much more than the $5.3 million she raised in the first quarter of 2017 as she sought re-election to her Senate seat.

Gillibrand raised $12.6 million and had $10.2 million in the bank at the start of the second quarter, but those totals were boosted by $9.6 million she transferred from her Senate campaign account.

John Delaney, a former representative from Maryland who was the first candidate to declare his candidacy for the 2020 Democratic presidential nomination, took in $12.1 million in the first quarter of 2019, including $11.7 million of his own money. His campaign ended the quarter with $10.6 million cash on hand.

Delaney has struggled to round up enough small-dollar donors to qualify for the Democratic debates and took the unusual step of offering to donate $2 to one of 11 charities for each new donor who contributed to his campaign.

To contact the reporters on this story: Bill Allison in Washington at ballison14@bloomberg.net;John McCormick in Chicago at jmccormick16@bloomberg.net

To contact the editors responsible for this story: Sara Forden at sforden@bloomberg.net, Mark Niquette, Paula Dwyer