When former NRATV host Amy Robbins started training for a marathon four years ago, she felt nervous, she said, after a passing car slowed and followed her jogging down the rural backroads outside a Texas suburb.

Nothing happened, and Robbins called the episode "anticlimactic," although she soon realized she wasn't the only woman concerned about her safety when running outside by herself. When she started searching for clothes to help carry her gun, she said she couldn't find anything as cute as her Lululemons. "There's no functional clothing to help women carry around self-defense tools," Robbins told CBS MoneyWatch.

So Robbins founded Alexo Athletica in 2017, billing it as an athletic "carrywear" company for women who want to conceal guns on their person. While the brand's "Signature Pant" retails for about the same as your Lululemon or Athleta leggings, it also has nine pockets designed for your gun, knife and pepper spray — along with your keys and smartphone.

It's a controversial line of business, but a profitable one, according to Robbins, who won't share specific numbers but said last year's inventory was sold out for five months and sales so far this year are nearly triple last year's rate. Alexo's chic messaging to "carry with confidence," blending "carrywear" with female empowerment, has helped the brand connect with some millennial women who take to Instagram to show off their purchases.

"Pink it and shrink it"

About one in five women owned a firearm in 2017, compared to more than three in five men, according to the Pew Research Center. Despite the gap, the number of women gun owners has been growing for decades, and the arms industry is paying attention to their purchasing.

Women spent an average $870 on guns in 2015, and an additional $405 on accessories, according to a study from the National Shooting Sports Foundation, which conducts the study every five years. However, industry experts say that the firearms industry took a long time to catch up with women's preferences.

"In the early days, they just took a 'pink it and shrink it' idea: We'll make the clothing, the stuff you see for men, and you'd put a little pink on it and give it to women," said Mark Oliva, manager of public affairs at the National Shooting Sports Foundation. "And my wife was like, 'I don't even like the pink.'"

New guns (and holsters) for the next generation

In response, the new generation of firearms is lighter, slimmer, with shorter parts and less recoil. Gun manufacturer Weatherby in 2017 came out with its first-ever rifle for women called Camilla, named for the founder's wife. The company said it took the average measurements of women to create a design to suit a woman's frame.

When firearms manufacturer LWRC International introduced the first AR-15 rifle made specifically for women, the gun won Shooting Illustrated's 2018 Women's Innovation Product of the Year. The company consulted more than 100 members of a gun-advocacy group called The Well Armed Woman to design the gun.

Carrie Lightfoot, who founded The Well Armed Woman in 2012, said more women are being vocal about what they want from their firearms manufacturers. Once a year, chapter leaders from her nonprofit group, which has 12,000 female members nationwide, meet with corporate sponsors to discuss future products. Corporate sponsors for The Well Armed Woman include manufacturers Glock, Sturm Ruger and Co., Walther Arms and Liberty Safe, as well as industry groups like NRA Women and the U.S. Concealed Carry Association, or USCCA.

"We had one of the CEOs say, 'Okay, I don't have a clue how to talk to you. How can I market to you? Help me understand what you need and how to communicate to you," Lightfoot said. "Every year, they go home with tons of notes." 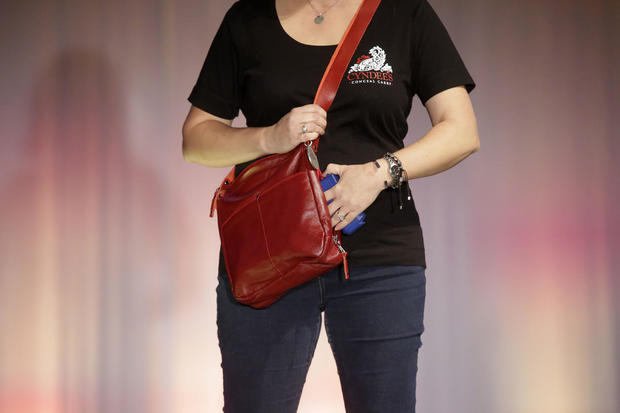 A model walks the runway during the an NRA "concealed carry fashion show" in Milwaukee, Wisconsin, in 2017.JOSHUA LOTT / AFP/GETTY IMAGES

Beyond the gear, women are also looking at apparel that suits their needs, including items like holsters, purses, nylons and blouses. In 2017, the NRA put together its first "concealed carry fashion show" for women.

Dawn Hillyer, founder of handbag company Hiding Hilda, makes a line of lightweight purses for conceal carry. Meanwhile, Lightfoot herself has designed a line of multi-hued holsters for a woman's curved hip, as opposed to a man's straight one.

Safety and protection over recreation

Lightfoot agrees, saying that she hopes women explore all their options when it comes to their safety. "I think women see all of this, and it's painful to watch to hear about anyone getting hurt or murdered or raped," Lightfoot said. "They're thinking, 'What would I do?'"

"They don't want to rely on a husband or boyfriend or anybody else," said Oliva. "They want to make sure that they're safe."