The two sides didn’t discuss how it would be paid for, and Capitol Hill Republicans are unlikely to go along

Democratic congressional leaders said President Trump agreed to aim for a $2 trillion infrastructure package in a White House meeting on Tuesday, though the two sides didn’t discuss how it would be paid for, and Capitol Hill Republicans are unlikely to go along.

In unusually positive comments about negotiations with Mr. Trump, House Speaker Nancy Pelosi (D., Calif.) and Senate Minority Leader Chuck Schumer (D., N.Y.) said the meeting was productive and said they had agreed to return in three weeks to hear Mr. Trump’s ideas about how to pay for an infrastructure bill.

“There was goodwill in this meeting, and that was different than some of the other meetings that we’ve had,” Mr. Schumer said.

Mrs. Pelosi said the two sides had “come to one agreement: that the agreement would be big and bold.”

A statement from White House press secretary Sarah Sanders on the meeting didn’t mention any $2 trillion agreement and said the two sides would meet again to “discuss specific proposals and financing methods.”

Following the meeting, Mr. Schumer told reporters the president had agreed that a formula under which the federal government pays 20% of costs for a given project was too low, but that Mr. Trump didn’t agree to the government paying 80% of the costs.

In 2018, the White House pitched a plan in which cities and states would contribute at least 80% of the funding for infrastructure improvements, with 20% in federal funds.

What should be the top priority for American infrastructure spending? Join the conversation below.

Mr. Trump told lawmakers he wanted the infrastructure money to be well spent, telling them he was impressed by the “beautiful walls” he had seen in China—”not a dent, no paint was chipped,” according to a person familiar with the discussion. Mr. Trump said U.S. highways, in contrast, were an embarrassment, and criticized the company that he said sells “dented walls.”

Mr. Schumer said the president didn’t raise the topic of congressional investigations into himself and his associates, whichMr. Trump has repeatedly railed againstin recent weeks.

“I believe we can do both at once,” Mr. Schumer said. “We can come up with some good ideas on infrastructure and we want to hear his ideas on funding, and the House and the Senate can proceed on its oversight responsibilities. The two are not mutually exclusive.”

Democrats said the president raised other issues during the meeting, including his eagerness for lawmakers to pass the revised trade deal among North American countries—the U.S., Mexico, and Canada—known as USMCA.

Democrats pressed Mr. Trump repeatedly on what types of revenue generation he would support, Sen. Dick Durbin (D., Ill.) said, and the president declined to give specifics and instead invited the lawmakers to come back for a second meeting. Sen. Debbie Stabenow (D., Mich.) said Mr. Trump opposed changing the tax code.

“We left the hard part to be discussed later,” said Mr. Durbin.

Democrats’ optimism contrasted with pessimism from White House officials heading into the meeting. 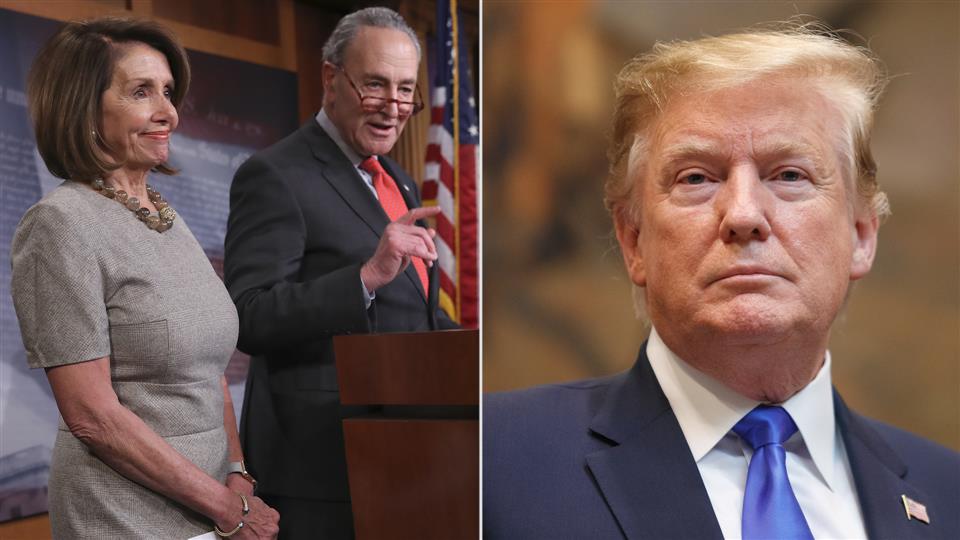 Infrastructure Spending: One Big Item Where There Could be Progress in Washington

White House acting chief of staff Mick Mulvaney, a former congressman, was absent from Tuesday’s meeting. Earlier at a conference in California, he cast doubt on the likelihood of an infrastructure package while Democrats are conducting oversight of Mr. Trump. Mr. Mulvaney said the refrain in the White House is: “Legislate or litigate.”

Mr. Mulvaney said one chief area of disagreement is that the White House wants environmental deregulation included in an infrastructure package, which it says would speed up new projects. Democrats oppose the deregulation out of concern for the environment.

Democrats disagree internally on how to generate revenue for an infrastructure plan. Mr. Schumer won’t consider a proposal to raise the gas tax, unless Mr. Trump agrees to undo some of the 2017 tax cuts, a person close to the minority leader said. Mr. Schumer, along with several other Democrats, say a gas tax disproportionately hurts poor and working-class people.

Other Democrats, such as House Transportation and Infrastructure Committee Chairman Peter DeFazio (D., Ore.), say they would support increasing the gas tax, which hasn’t been raised in more than 25 years, to pay for infrastructure projects.

An assessment from the American Society of Civil Engineers in 2017 said the nation’s deteriorating infrastructure is harming its ability to compete in a global economy. It estimated the U.S. had an $836 billion backlog of highway and bridge capital needs.

Democrats have proposed ideas to Mr. Trump, only to see them shot down later. In September 2017, Democrats said they reached a deal with Mr. Trump to help young immigrants brought to the country illegally, only to have the White House recant the idea later when Republicans lawmakers protested.