Senate Minority Leader Chuck Schumer (D-N.Y.) on Thursday announced he is reintroducing his bill to decriminalize and regulate marijuana at the federal level.

The legislation, which he first unveiled last year, would remove marijuana from the Controlled Substances Act, where it is classified among drugs such as heroin and LSD.

This time, however, Schumer is teaming up with Rep. Hakeem Jeffries (N.Y), the chairman of the House Democratic Caucus, who is introducing a companion measure in the lower chamber.

The two Democratic leaders pitched the decriminalization of marijuana as a boon for minority communities and small business in a new video shot in their home neighborhood of Brooklyn.

“It’s about time we decriminalize marijuana ... what we’re saying is very simple, let each state do what it wants,” Schumer says in the video, touting the provisions in the bill that allow states to set their own laws regulating the sale of marijuana.

The legislation also includes a criminal justice reform element, providing $100 million over five years to the Department of Justice to encourage state and local governments to bolster expungement programs for marijuana possession convictions.

“You’ve had lives and communities that have been ruined in large measure by the overcriminalization and so creating opportunity and economic space will be tremendous,” Jeffries, an outspoken advocate forcannabis, adds in the video.

Schumer’s collaboration with Jeffries is notable not just for their roots in Brooklyn. Jeffries is viewed by his Democratic colleagues as a rising star in the party and a potential future speaker. With Rep. Ben Ray Luján (D-N.M.) recently deciding to jump into New Mexico’s U.S. Senate race, Jeffries’ path to the speakership in years to come became even clearer.

With Jeffries and Schumer, two top Democrats in the House and Senate, on board, marijuana decriminalization at the federal level is one step closer to becoming a reality. But making it so will require the party to win back the Senate and White House in 2020 ― no easy task.

Public support for marijuana legalization has steadily grown. Last month, New Mexico became the latest state in the U.S. to decriminalize possession of marijuana. The Texas House of Representatives also voted in April to lower criminal penalties for possession of less than 1 ounce of marijuana. 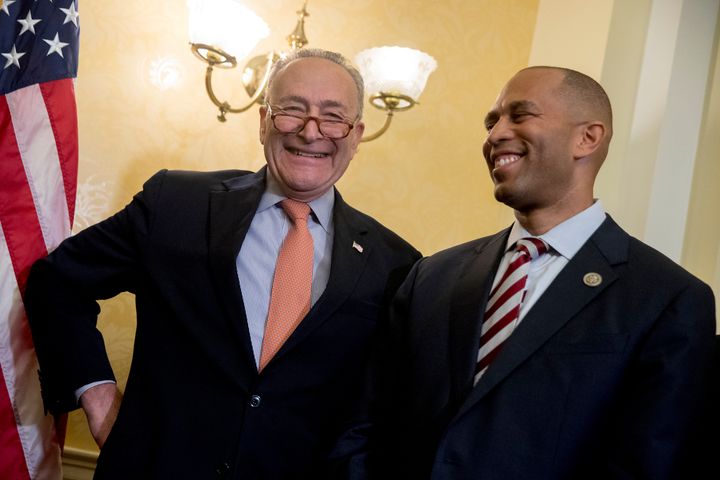 Senate Minority Leader Chuck Schumer (left) and Rep. Hakeem Jeffries are teaming up to try to declassify marijuana as a controlled substance.

Last year, Sens. Cory Gardner (R-Colo.) and Elizabeth Warren (D-Mass.) introduced a similar bill that would loosen federal guidelines on marijuana and give states more flexibility in determining their own laws. Gardner said last month that President Donald Trump told him he favored that bill, but that Senate Majority Leader Mitch McConnell (R-Ky.) remained an obstacle to its passage.

Schumer’s bill, the Marijuana Freedom and Opportunity Act, includes millions of dollars dedicated to studying the effects of THC on the brain and its influence on drivers, as well as provisions to ensure that businesses cannot target children in their advertisements for cannabis.