Border Patrol officials have temporarily stopped processing apprehended migrants at the agency’s largest detention center, in the South Texas city of McAllen, after detainees there showed signs of a flu-related illness.

The halt was ordered late Tuesday, a day after the death of a 16-year-old Guatemalan boy who was sick with the flu and had been in custody at the center.

On Tuesday, medical staff at the facility — known as the Centralized Processing Center or Ursula, from its address on Ursula Avenue — identified a large number of migrants with high fevers and flu-related symptoms. Officials decided to temporarily suspend all intake procedures for migrants to “avoid the spread of illness,” the Border Patrol’s parent agency, Customs and Border Protection, said in a statement.

The Centralized Processing Center remains in operation, but it is no longer receiving new migrants, officials said. Migrants apprehended in the area are now being processed at other locations.

The move has raised new questions and controversy over the conditions and the medical care in Border Patrol facilities, as the agency scrambles to handle a surge of migrants arriving from Guatemala, Honduras and El Salvador.

The 16-year-old boy, Carlos Gregorio Hernandez Vasquez,was found dead on Monday morning. He was the third migrant child — all of them from Guatemala — to die in Customs and Border Protection custody in recent months. A fourth, another 16-year-old Guatemalan boy,died last monthafter being placed in a migrant youth shelter by the Department of Health and Human Services.

Carlos was sick with influenza, but the cause of death is not yet known.

He was an unaccompanied minor, and had entered the United States on May 13 near Hidalgo, Tex. According to a Customs and Border Protection official who spoke to reporters on the condition of anonymity, Carlos received an initial medical screening that day and showed no signs of illness, and then was transferred to the Centralized Processing Center, the main hub for processing migrants apprehended in the Rio Grande Valley region.

On Sunday morning, the official said, Carlos told agents he was not feeling well, and a nurse practitioner determined that he had influenza and recommended that he receive doses of Tamiflu.

Carlos was later transferred to a Border Patrol station in Weslaco, about 20 miles away, where he could be separated from other detainees. He was found dead at the Weslaco station about an hour after a welfare check, the official said.

The agency said it has begun an investigation into his death.

Though it was unclear exactly how many detainees showed flu-related symptoms on Tuesday at Ursula, it appeared to be only a small fraction of the hundreds of migrants who are processed there daily.

Officials have been struggling to house and care for a flood of Central American families, most of whom turn themselves in after crossing the border illegally. Hundreds of migrant families are apprehended daily, and even hourly in some border regions. Agents in South Texas apprehended more than 400 migrants in several groups one recent morning.

In the busiest Border Patrol sector — the Rio Grande Valley Sector, which includes McAllen — the holding capacity of the agency’s facilities is 3,363 detained migrants, but more than 8,000 were in custody last week.

The Border Patrol opened a temporary tent city in Donna, a town near McAllen, and has built four more tent structures outside two Border Patrol stations in South Texas.

With its holding facilities filled far past capacity, the Border Patrol has set up a tent city in Donna, Tex., and erected tents outside several of its stations in South Texas, including the one in McAllen.CreditLoren Elliott/Reuters 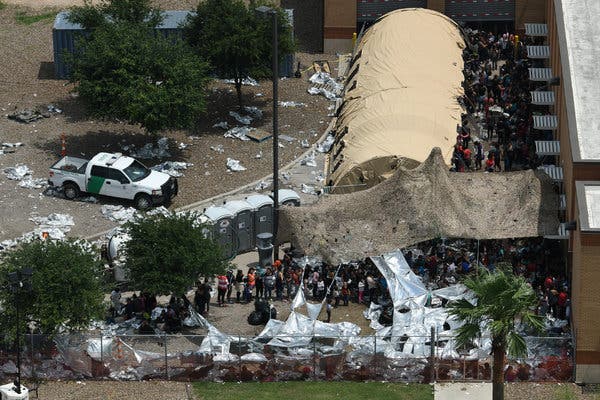 With its holding facilities filled far past capacity, the Border Patrol has set up a tent city in Donna, Tex., and erected tents outside several of its stations in South Texas, including the one in McAllen.CreditLoren Elliott/Reuters

Images of migrants sitting on the concrete pavement and grass outside Border Patrol buildings in recent days have outraged immigrant advocates and Democratic lawmakers. For months, they have complained that the conditions at the detention centers and tent cities are callous and unhealthy.

Many migrants are ill when they are apprehended, or become ill after being housed at Ursula. The McAllen detention center, which opened in 2014, is effectively a giant warehouse of corrugated steel, with groups of migrants held in chain-link cages. Migrants refer to it as “La Hielera” — the cooler or the icebox — because of its frigid temperatures. Border Patrol officials said ill migrants apprehended in the Rio Grande Valley Sector are frequently taken to local hospitals, with the sector averaging 20 hospital visits per day.

Christopher Cabrera, a vice president of the local union of Border Patrol agents in the Rio Grande Valley,spoke in an interview in Aprilabout the disease and illness in the building.

“The majority of our agents get sick,” said Mr. Cabrera, who has been a Border Patrol agent for 17 years. “Infectious disease is everywhere. There’s always scabies in there. Usually we have chickenpox. We have tuberculosis in there. You name it, it’s probably been through that building.”

Border Patrol officials have described the influx of migrants as a humanitarian crisis that is straining the agency’s resources and diverting it from its border security mission. In a statement on May 17, Rodolfo Karisch, the Border Patrol’s chief patrol agent for the Rio Grande Valley Sector, called the creation of the four new tent structures at two Border Patrol facilities a “default solution.”

“This is the reality of what happens when we simply cannot handle the influx of migrants arriving,” Mr. Karisch said in the statement. “We are doing all we can to ensure a safe environment for all involved, but it is crystal clear that we have a real emergency on the border; this is not sustainable.”

In Washington on Wednesday, the rising number of deaths of detained migrant children touched off a heated exchange between members of Congress and the acting secretary of homeland security, Kevin McAleenan.

At a House Homeland Security Committee hearing, Representative Lauren Underwood, Democrat of Illinois, pressed Mr. McAleenan on the medical effects that family separations have on children, as well as the recent deaths of migrants in federal custody.

“I feel like, and the evidence is really clear, that this is intentional,” Ms. Underwood said. “It’s intentional. It’s a policy choice being made on purpose.”

“That’s an appalling accusation,” Mr. McAleenan replied. “And our men and women fight hard to protect people in our custody every day.”

The committee voted 9 to 7 to strike Ms. Underwood’s statement from the record.

The White House has requested $4.5 billion in emergency funds for the southwest border, including nearly $3 billion for the Department of Health and Human Services to care for unaccompanied minors. Mr. McAleenan said at the hearing that the funds would help prevent deaths of children in federal custody.

Detained migrant children are supposed to be transferred out of Border Patrol facilities and into shelters managed by the Department of Health and Human Services within three days. But Carlos was not assigned a shelter bed until six days after he had been detained.

“Do you know how disturbing it is when the largest law enforcement agency is not even following the law?” said Representative Nanette Barragán, Democrat of California.

Homeland security officials have said they must wait for Health and Human Services’ approval before transferring detained children to shelters.

Democrats have opposed granting the full amount of emergency funds requested for the border because it includes money for additional detention beds, which would be used to detain more immigrants. But in negotiations to secure more money for hurricane relief in Puerto Rico, Democrats have offered to allocate additional money for food and humanitarian assistance for migrants detained at the border.