An hour before Robert Mueller prepared to give his one — and apparently only — public statement on the findings of his investigation into Russian electoral interference, calls for a very different sort of probe were taking place at an event organized by a conservative organization closely aligned with President Trump.

There were calls for President Obama to testify before Congress, as well as suspicions about FBI Director Christopher Wray. Trump, meanwhile, was a “crime victim,” while alleged spying on the Trump campaign by law enforcement entities in the Obama administration was nothing short of “terrorism.”

These were some of the assertions made during a panel hosted on Wednesday morning by Judicial Watch titled “Investigating the Investigators,” an evident reference to Mueller, who was appointed by the Department of Justice to investigate allegations that the Trump presidential campaign may have worked with Russia to defeat Hillary Clinton in 2016.

“It is time to look into the politicization of the DOJ and the intelligence community in their effort to undermine the president,” said a press release for the event, which took place at the studio of One America News, a conservative media outlet.

With the Mueller report now a public document — and a highly contentious one at that — the event was a window into how Trump’s supporters plan to reframe the debate over the president’s possible wrongdoing into an attack on the origins of the investigation. That approach appears to be directed by the White House, with Trump last week authorizing Attorney General William Barr to declassify documents related to potential surveillance on the Trump campaign. Barr has previously expressed concerns that the FBI may have conducted unauthorized “spying” during the 2016 election.

“Something very horrible went terribly wrong,” said another of the panelists, Christopher J. Farrell, also of Judicial Watch. “A hoax has been perpetrated upon” the American people, Farrell said, speaking of the Mueller report.

“It was a coup,” Farrell went on to say, albeit one without tanks in the streets. “It was an effort to unseat or destabilize the Trump administration.”

He said that that effort — much of it overseen by Trump’s own Department of Justice — was a worse abuse of power than Watergate or any other presidential scandal. 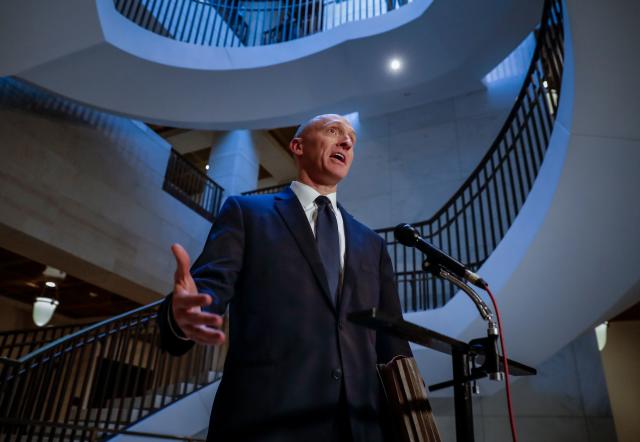 Victoria Toensing, a conservative lawyer, meanwhile accused FBI Director Wray of “stonewalling.” Wray was virtually the only Trump administration official to be criticized by the Judicial Watch panelists, who charged that he was more interested in protecting the FBI’s credibility than he was in letting Barr conduct a full investigation into “spying” by the bureau into the Trump campaign.

The most notable of the panelists was Carter Page, a foreign policy expert with the Trump campaign who authorities believed was trying to make contacts with Russia during the 2016 campaign. The FBI in 2016 obtained a Foreign Intelligence Surveillance Act warrant to surveil Page, who has been largely unrepentant about his role in the Trump campaign. On Wednesday, he said he was the victim of “civil rights abuses.”

“We’re really all victims in this,” Page said, seeming to refer to the broader Trump movement and its affiliates.

Tom Fitton, the Judicial Watch head, who regularly defends Trump on Fox News, blasted the “dishonesty of the Mueller report.” A press release sent ahead of the panel said that same report “has exonerated President Trump of the false accusations of collusion and obstruction.”

Trump himself has claimed such exoneration, an apparent reference to a lack of new indictments stemming from Mueller’s findings. The Mueller report did not find evidence the Trump campaign conspired with Russia, and did not draw conclusions about whether the president should be charged with obstruction of justice.

Whatever the interpretation of the Mueller report, the panelists focused on attacking the investigation itself, and suggested that former Democratic officials need to now be investigated, some three years after the activity in question may have taken place.

Trump’s foe in the 2016 election, Hillary Clinton, remained a primary target. At one point, Fitton said that she was “working directly with Russian intelligence,” referring to the dossier compiled by former British intelligence officer Christopher Steele.

Though the Steele dossier was commissioned by the Democratic National Committee, the initial investigation into Trump's business dealings was paid for by a Republican publisher and donor, Paul Singer.

And while Democrats in the House of Representatives would like Mueller to testify, the Judicial Watch panelists wanted to see another former public servant troop up Capitol Hill.

“I want to know: What did Obama know? What did he approve? What did he tacitly nod his head for? What did he explicitly authorize?” Farrell wondered. “Let’s get Mr. Obama under oath.”