The shooter was killed by police after firing at officers, he said. One officer was shot but his bullet-proof vest saved his life, Cervera said.

"This is the most devastating day in the history of Virginia Beach," Mayor Bobby Dwyer said. "The people involved are our friends, coworkers, neighbors and colleagues."

The shooter was a current employee who had worked for the city for a long time, Cervera said in a press conference Friday night.

The shooting started shortly after 4 p.m., just as workers were wrapping up their day and preparing to leave for the weekend.

Dale Gauding, a Sentara spokesman, said in an email that five patients went toVirginia Beach General, and one person arrived at the Level I Trauma Center atSentara Norfolk General Hospitalin a Nightingale helicopter shortly after 6 p.m.

ACTIVE SHOOTER SITUATION-municipal center, building 2. Multiple injuries. At this time it is believed that only 1 shooter, and they have been taken into custody. More to follow

At 4:50 p.m., theVirginia Beach Police Departmenttweeted that one shooter had been taken into custody and multiple people were injured. Perry said he could not say how many.

All city employees except for those who are in the Operations building have been allowed to leave the area, Perry said at 6 p.m.

Megan Blanton, 30, was in the building when a gunman began firing. She said her supervisor pulled her and others into an office and shoved a desk against the door while Blanton called 911.

Public Works spokesmanDrew Lankford, who works in the Operations building, left the office on Friday afternoon to get a haircut. While he was gone, his daughter called and said there had been a shooter in his work building.

His daughter, who works in the City Hall building, said security told everyone to get under their desks. He rushed back to the office and saw cops taking cover behind parked cars with their guns drawn.

At scene of active shooter situation in Virginia Beach. Lots of officers taping off portions of this street, many with rifles drawn. @virginianpilot 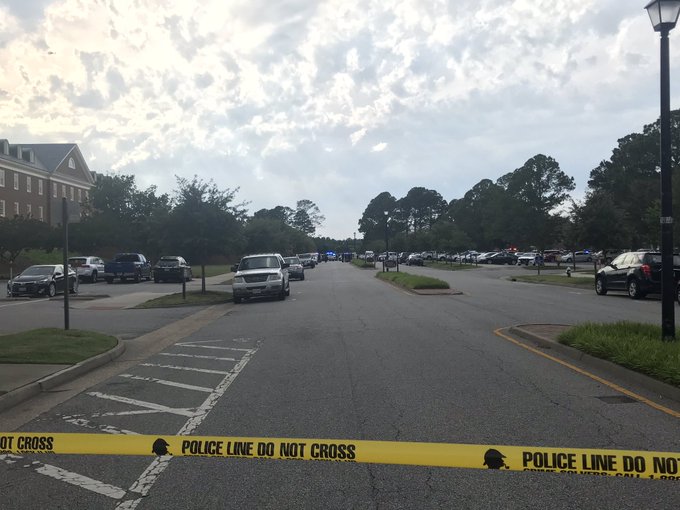 Frantic scene here. A woman I just talked to was waiting outside building 1 in her car where city manager, city clerk and city attorneys offices are. Her daughter was inside paying a parking ticket when the shooting happened.

City CouncilwomanBarbara Henleyhad just pulled up to the City Hall building just after 4 p.m. to pick up the agenda as she does every week when she heard sirens and saw police cars.

"I thought it was an accident," Henley said.

As she parked her car in the lot between Building 1 and 2, she noticed city employees standing outside using their cellphones. Someone told her there was a shooting and she should leave. Henley had gotten back in her car when she heard a male voice shout, "Get down!"

"I was scared to death," Henley said.

Henley said she's never seen a situation like this before at the Municipal Center, adding that security has recently been "beefed up" in the City Hall building as a result of shooting incidents across the nation, but that some of the other municipal buildings do not take the same security measures.