Walmart’s annual shareholder meeting is a multiday celebration of one of America's most well-known capitalists: Sam Walton.

This time around, it may be a socialist who steals the show.

Sen. Bernie Sanders stopped in Bentonville, Ark., Walmart’s headquarters, on Wednesday. He told shareholder and members of the board that “despite the incredible wealth of its owner, Walmart pays many of its employees starvation wages."

He added: “Frankly, the American people are sick and tired of subsidizing the greed of some of the largest and most profitable corporations in this country."

Sanders may be the most vocal candidate making an issue of Walmart’s business practices (he recently introduced a bill called the “Stop WALMART Act”), but he is far from the only presidential contender with a close eye on the largest employer in the United States.

The Vermont senator will presented a proposal for one of Walmart’s hourly workers to join the board of directors. He urged Walmart to adopt the proposal to "strike a blow against greed and the grotesque levels of income inequality that exists in our country."

In a statement to Yahoo Finance before the speech, Walmart said it hopes that Sanders “will approach his visit not as a campaign stop, but as a constructive opportunity to learn about the many ways we’re working to provide increased economic opportunity, mobility and benefits to our associates — as well as our widely recognized leadership on environmental sustainability.”

The Sanders appearance is one prong of an effort to institute a national $15 minimum wage. A recent forum in Las Vegas included six leading presidential candidates in support of the idea: Julián Castro, Kamala Harris, John Hickenlooper, Amy Klobuchar, Beto O'Rourke, and Elizabeth Warren. Nearly the entire field has come out in support of the proposal as well as other high-profile Democrats like Rep. Alexandria Ocasio-Cortez. 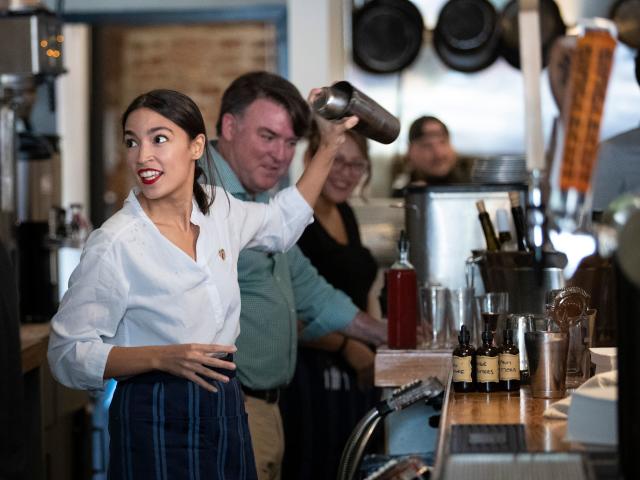 U.S. Rep. Alexandria Ocasio-Cortez (D-NY) tends bar during in an event to raise awareness for the One Fair Wage campaign, which calls to raise the minimum wage for tipped workers to a full minimum wage at the federal level. (Photo by Drew Angerer/Getty Images)

Mayor Pete Buttigieg endorses a $15 minimum wage and, before he got in the presidential race, repeatedlypraised both Walmart and Google for funding a lifelong learning center in South Bend, Ind.

Cory Booker (D-NJ) has focused on Walmart’s stock buybacks with a bill that would force the company to pay a “workers dividend” to its employees commensurate with the amount allotted to stock buybacks. When the bill was introduced, Booker appeared on an economics podcast and noted that if his bill had been law in 2017, Walmart’s workers “would have seen a dividend of $3,266 added to their annual pay. They, too, would have the benefit from the use of that money for a stock buyback.” According to calculations by the Booker campaign, the “workers dividend” would be even higher in the fiscal year ending 2019.

Sen. Warren (D-MA) has also been critical of Walmart’s stock buybacks but may want to go even farther. She had an entire section of a 2016 speech on corporate consolidation devoted to the company. She asked her audience to "look at what is often referred to as the Walmart effect" noting that "often, when Walmart moves into town, small businesses collapse." 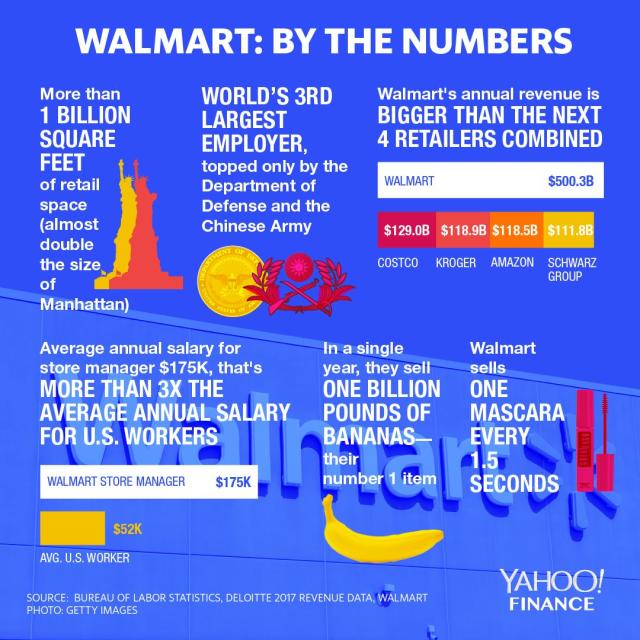 She concluded her speech by noting that "strong executive leadership could revive antitrust enforcement in this country and begin, once again, to fight back against dominant market power and overwhelming political power."

Charles Fishman literally wrote the book on "The Wal-Mart Effect." His 2006 book laid out many of the arguments that candidates like Warren are making today.

In an interview with Yahoo Finance, Fishman noted there is still an impact on smaller businesses, but “that particular train has left the station, we're in the middle of a complete retail wipe-out.”

“Retail is changing, and Walmart's not the driver of that anymore,” Fishman said. Now “Amazon is much closer to the scale of Walmart than Target ever was or that Kmart ever was.” 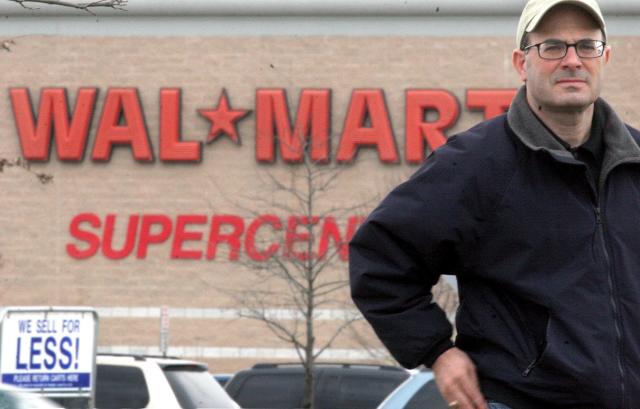 Charles Fishman - author of "The Wal-Mart Effect" - outside the store in a shopping center in Hagerstown, Md. (Photo by Rich Lipski/The Washington Post/Getty Images)

Amazon – amid intense public scrutiny – raised its minimum wage to $15 per hour in 2018. Walmart has not followed suit but the average wage for a full-time field associate in a U.S. Walmart is now $14.26 per hour, according to a recent company report.

The report also says that Walmart’s turnover rate has recently dropped 10%, and Fishman notes that Walmart has made strides after learning “that paying people better and giving them slightly better benefits actually had an impact on retaining staff, and retaining staff is good for the company.”

Still, as Bernie Sanders and others are eager to point out, Walmart’s wages are still well below a $15 minimum. “There's lots of reasons Bernie Sanders is going to the Walmart annual meeting” says Fishman. “I think his big frame point is, let's not cheer too hard for $14.26 an hour until you go try and live on that. It's very, very hard.”