Calling the surprising May surge in illegal immigrant arrests on the border the “worst case scenario,” a top immigration analyst has boosted the expected level of crossings 10%, to over 1 million.

U.S. Customs and Border Protection on Wednesday revealed that May apprehensions topped 144,000. This year has seen 676,315 apprehensions so far, up 99% over this time last year.

That shocked immigration officials who had hoped it would drop in part due to the Trump administration’s get tough efforts on the border and the potentially deadly heat migrants encounter traveling through northern Mexico. 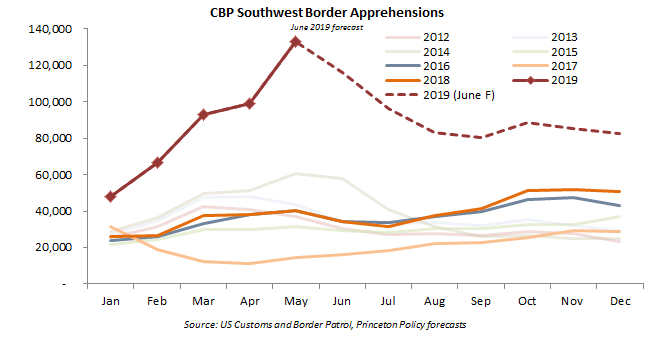 Steven Kopits, the president of Princeton Policy Advisors which has predicted that immigrant apprehensions would reach 931,000 this year, expressed concern about the May numbers and boosted his prediction to 1,072,000.

“We had expected a major surge heading into the summer months, but this is above our worst case scenario,” he added.

And it could go up again if his predictions of high June illegal crossings comes true.

“Forecasting remains a challenge, but our current estimates, allowing for seasonal fluctuations, projects 1,072,000 apprehensions at the southwest border for calendar year 2019. This would be the highest full year since 2005,” he said.

“No doubt President Trump had a sense of these numbers a few days ago, hence the Mexico tariff initiative. Notwithstanding, we expect a similarly bad June,” Kopits added.