TheDow Jones Industrial Averagerallied to a record high on Thursday, led by UnitedHealth shares, after testimony by Federal Reserve Chair Jerome Powell this week that signaled easier monetary policy could be implemented later this month.

Microsoft has been the best-performing Dow stock since theindex’s first close above 26,000, surging around 50% in that time. Visa, Cisco Systems and Nike are also up sharply since then. 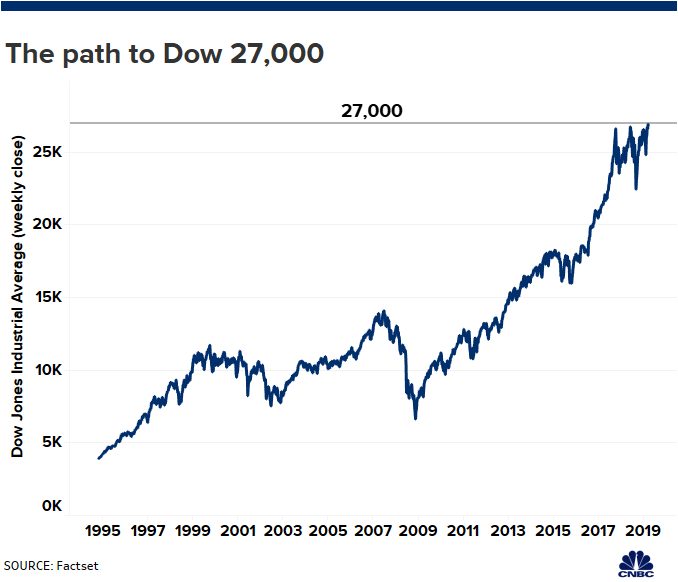 “This week solidified the fact that the market doesn’t need, it doesn’t want, it’s demanding a rate cut from Powell,” said Jeff Kilburg, CEO of KKM Financial. “I do have a little bit of caution going into the earnings season because we have some forward-guidance uncertainty with the trade tensions, but the wind in the sails continues to be that dovish stance from Powell.”

In testimony to the House Financial Services Committee on Wednesday,Powellsaid business investments across the U.S. have slowed “notably” recently as uncertainties over the economic outlook linger. As a result, expectations of an upcoming rate cut grew.

Traders work on the floor of the New York Stock Exchange.

“Crosscurrents have reemerged,”Powell said. “Many FOMC participants saw that the case for a somewhat more accommodative monetary policy had strengthened. Since then, based on incoming data and other developments, it appears that uncertainties around trade tensions and concerns about the strength of the global economy continue to weigh on the U.S. economic outlook.”

Powell reiterated that testimony on Thursday. Market expectations for a rate cut later this month are at 100%, according to the CME Group’s FedWatch tool.

Thursday’s milestone was only the latest in the longest bull market in history. The bull run started in March of 2009 after the financial crisis. Back then, the Dow was trading around 6,600 points while the S&P 500 hovered below 1,000 points.

“Sure, 27,000 is just a number and in the whole scope of things isn’t meaningful,” said Ryan Detrick, senior market strategist at LPL Financial. “What it is though, is a reminder for all investors that this bull market has ignored all the scary headlines for years and the dual benefit of fiscal and monetary policy could mean it has a lot longer to go than most expect.”

In economic news, the U.S. consumer price index — a widely followed measure of inflation — rose more than expected last month, with the core CPI posting its biggest gain in 1½ years. But that failed to dent investors’ expectations that the Fed will deliver a rate cut.