Federal racketeering, murder and other charges were filed against 22 suspected MS-13 gang members who law enforcement officials believe are linked to a series of grisly killings involving baseball bats, machetes and other tools of "medieval-style" violence, authorities said Tuesday.

Nineteen of those indicted are considered illegal immigrants, and most of the group's members arrived in the U.S. in the past four years from Central America. All but two are under the age of 24, Nicola Hanna, the U.S. Attorney for Los Angeles, announced at a news conference. Most, he added, participated in the "killing spree."

The arrests – the last came over the weekend – capped a two-year investigation. While President Donald Trump has singled out MS-13 as a threat to public safety in the making the case for tighter security along the Mexican border, Hanna said the defendants mostly preyed upon other recent immigrants who they believed were rivals.

Those arrested were all part of the so-called Fulton clique of MS-13, one of the most violent of about 20 factions of MS-13 operating in the Los Angeles area, Hanna said. The clique operated primarily in L.A.'s San Fernando Valley. 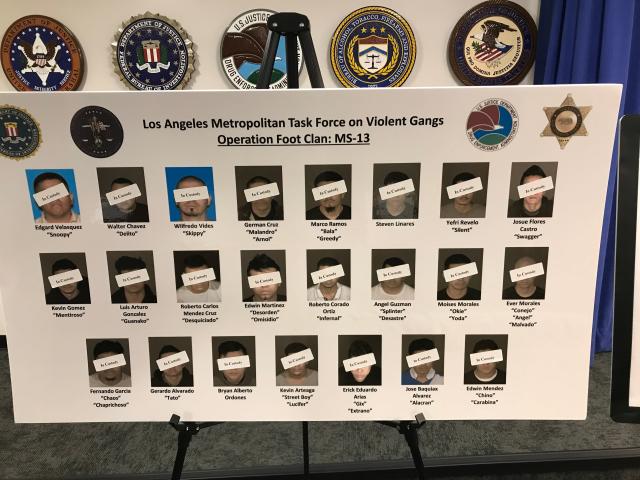 In one of the most horrific allegations, several are accused of luring a perceived rival gang member who they believed to have defaced MS-13 graffiti to the forest outside Los Angeles and killed him with a machete. They dismembered his body and cut out his heart before dumping the remains into a canyon, authorities said.

The case "centers on murders and medieval-style violence," said Paul Delacourt, assistant director in charge of the FBI's Los Angeles office. Until the spree began, "we haven't seen this level of violence associated with MS-13 in Southern California."

The FBI conducted the investigation in conjunction with Los Angeles police, county sheriff's department and the district attorney's office.

Hanna said this is only the latest action against MS-13, which engages in extortion and drug dealing, among other activities. He has said his office targeted 34 members of the group's leadership for indictments.