The president made no public remarks in Ohio, where the community was mourning the nine victims of gunman Connor Betts, but a top adviser to the president insisted he was 'treated like a Rock Star inside the hospital' and it 'was all caught on video' in tweets that he sent while Air Force One was headed to the state of Texas.

'They all loved seeing their great President!' social media director Dan Scavino tweeted after Dayton's mayor and Ohio's Democratic senator attacked Trump minutes after his departure at a press conference.

Trump left Ohio without paying his respects to the dead at Sunday's shooting site, where the members of the community established a make-shift memorial, after his motorcade passed hundreds of protesters on the way into Miami Valley hospital. He did not appear to meet with the families of the dead.

but they were welcomed at Wright-Patterson Air Force base by city mayor Nan Whaley, who has been sharply critical of Trump in the wake of the massacre. 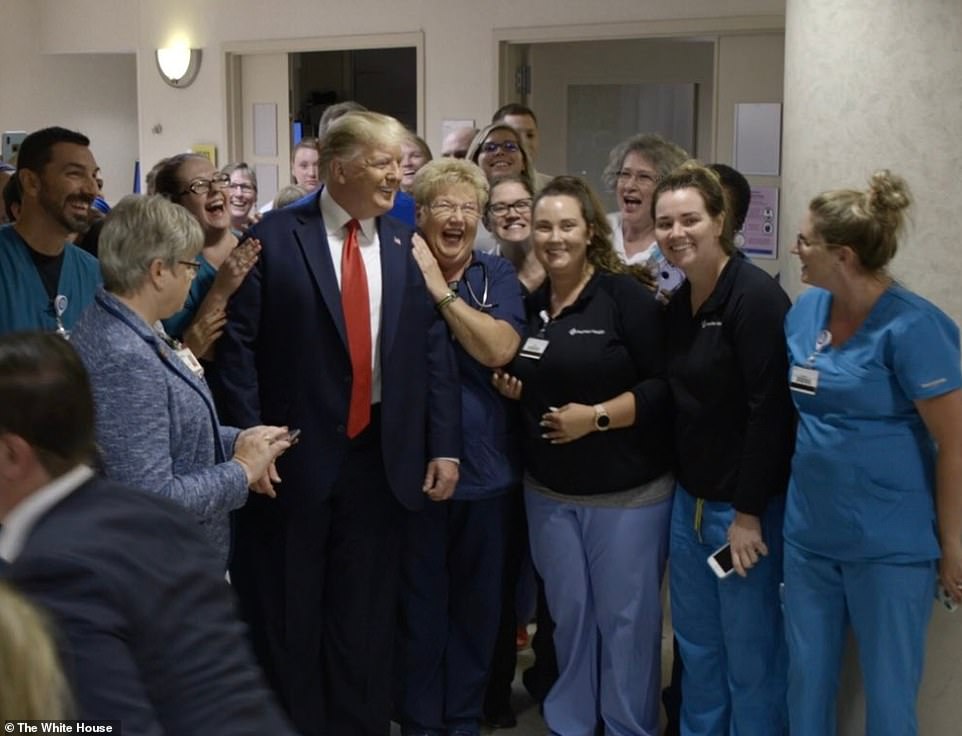 Ohio Democratic Sen. Sherrod Brown said that Trump met with police officers in a conference room at the hospital and told them he wants to honor first responders with an award.

'I said,"Respectfully, Mr. President," in a group of 20, 30, 40 people, "Respectfully, the most important thing you can do for these police officers is take these assault weapons off the streets, so they don't have to go up against those assault weapons when they need to take down a shooter, when they need to make an arrest," ' Brown says he told him.

Journalists were not allowed inside, but the White House released handout photos of Trump being hugged by the 'incredible medical staff at Miami Valley Hospital in Dayton, Ohio' on Scavino's account.

'Some extremely powerful moments throughout the entire visit, with so much enthusiasm and love, contrary to what the Trump Hating Dems would ever share or say,' he wrote.

Brown had acknowledged at his presser that Trump was well-received by patients, even as he accused the president of 'racist rhetoric' and lectured him on gun violence prevention. 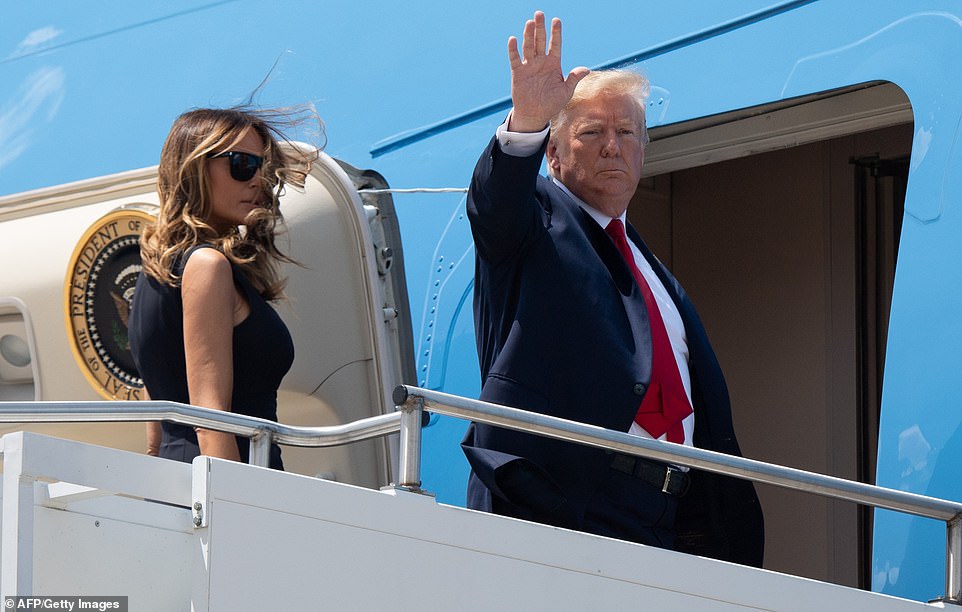 ALREADY GONE: The president and first lady did not visit the shooting site in the Oregon District of Dayton. They visited with shooting victims behind closed doors for two hours before leaving the city for El Paso 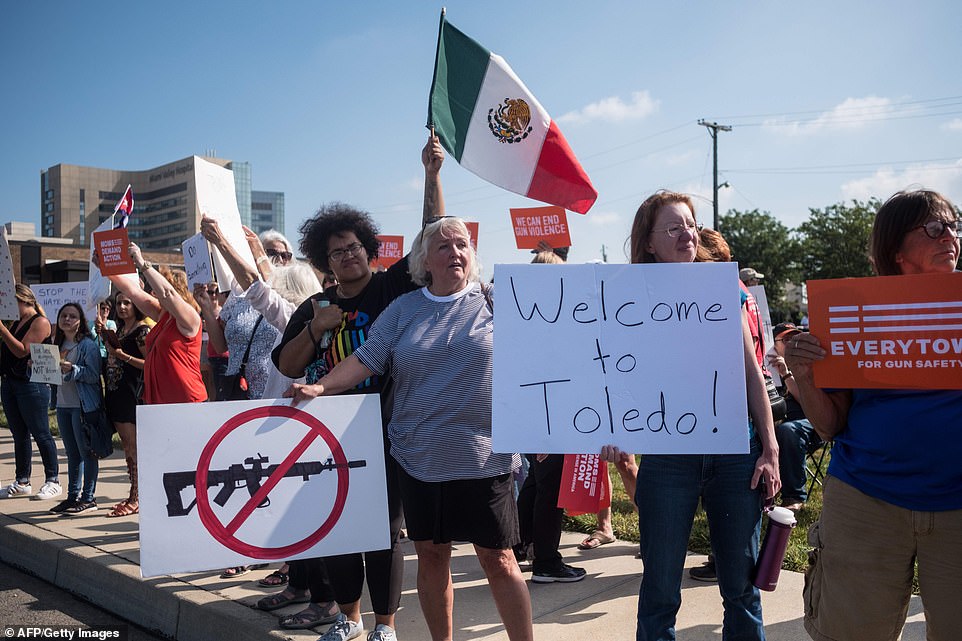 A demonstrator mocks Trump's claim in a national address that the shooting took place in Toledo. It was Dayton that was hit 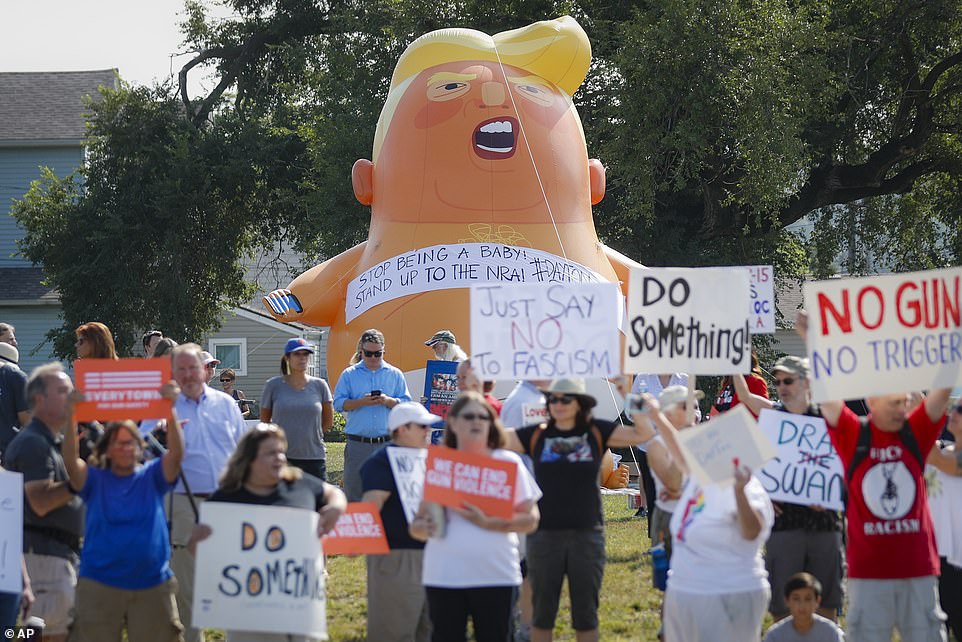 Demonstrators gather to protest the arrival of President Donald Trump outside Miami Valley Hospital after a mass shooting that occurred in the area early Sunday morning. A Trump blip looms in the background 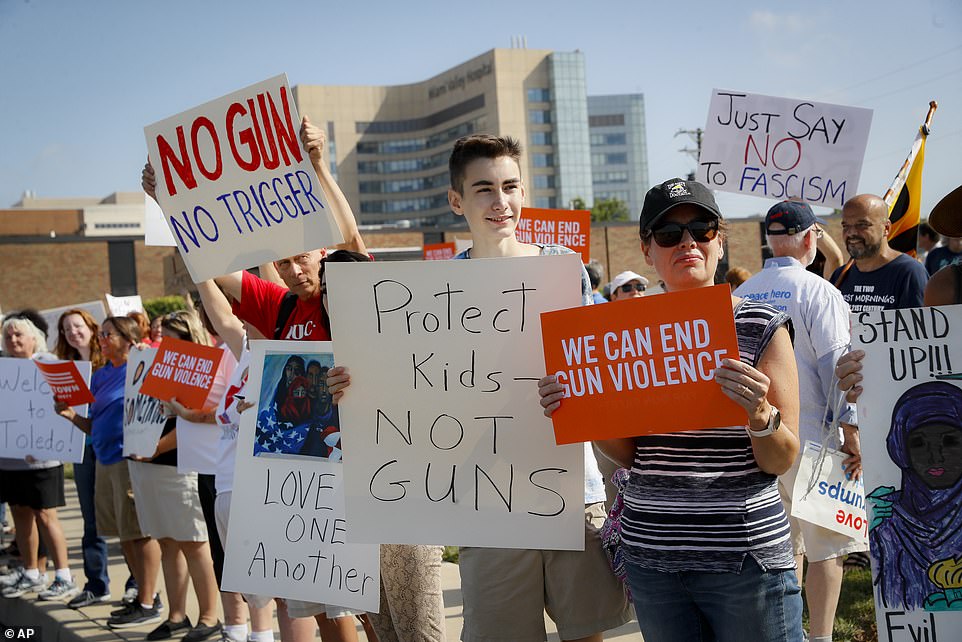 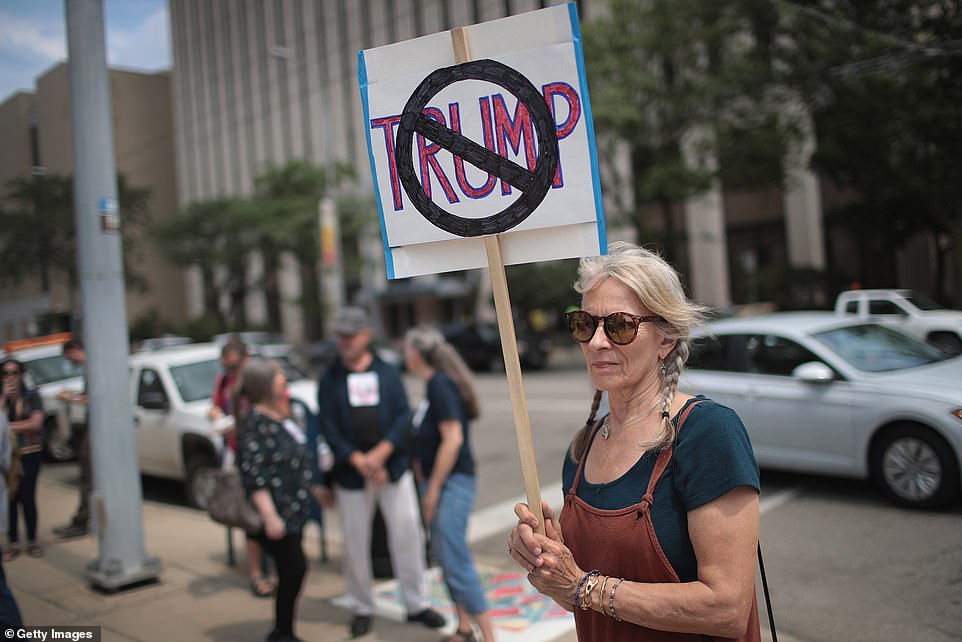 Demonstrators also gathered outside of the Dayton City Hall. Nine people were killed and another 27 injured when a gunman identified as 24-year-old Connor Betts opened fire with a AR-15 style rifle in a popular entertainment district 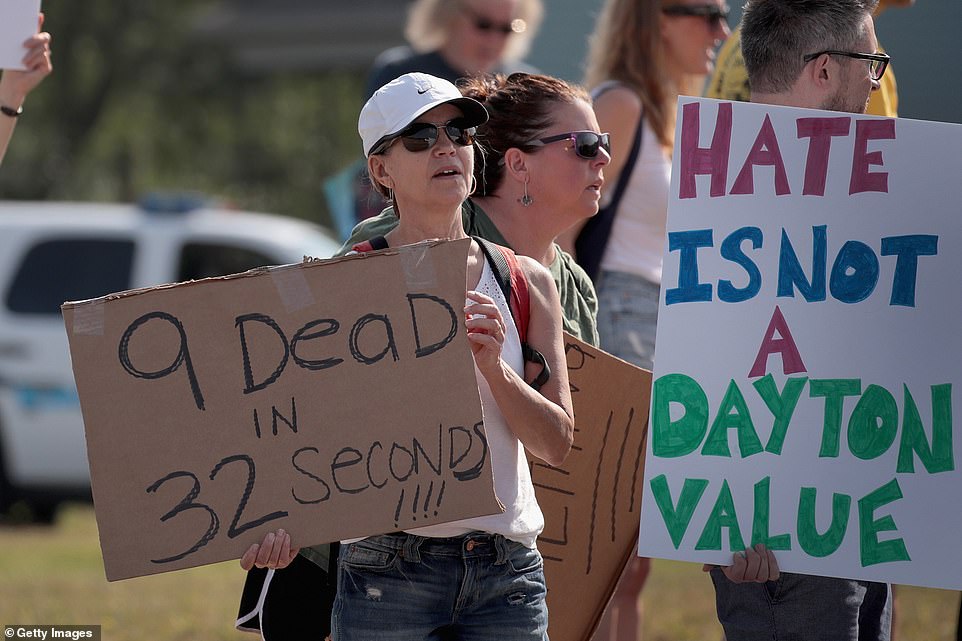 White House officials said the Trumps had 'truly special moments' with the patients they met and shared 'very powerful moments' with them. Press secretary Stephanie Grisham said that Trump told one of the families: 'You had God watching. I want you to know we’re with you all the way.'

Trump's visit was intended to thank first responders to the mass shooting and comfort the bereaved and victims. It was unclear whether he met with any of the families of the dead, however. Particularly, after he left Ohio without setting foot in the entertainment sector that the shooter targeted.

'I think it was a good decision for him not to stop in the Oregon District,' she said at a news conference after Trump left, mentioning the lingering 'anger and agitation' in the neighborhood. 'I think a lot of people that own businesses in that district aren't interested in the president being there. And you know, a lot of the time his talk can be very divisive, and that's the last thing we need in Dayton.'

It came before he was due to fly to El Paso with Melania, where former local congressman turned presidential hopeful Beto O'Rourke had told him to 'stay away,' saying his 'racist' rhetoric inflamed the killer.

Before he left the White House, Trump hit out at what he claimed was an attempt to ignore 24-year-old Betts' left-wing views, saying: 'He was a fan of Bernie Sanders and Elizabeth Warren, nothing to do with Trump, but nobody ever mentions that.' 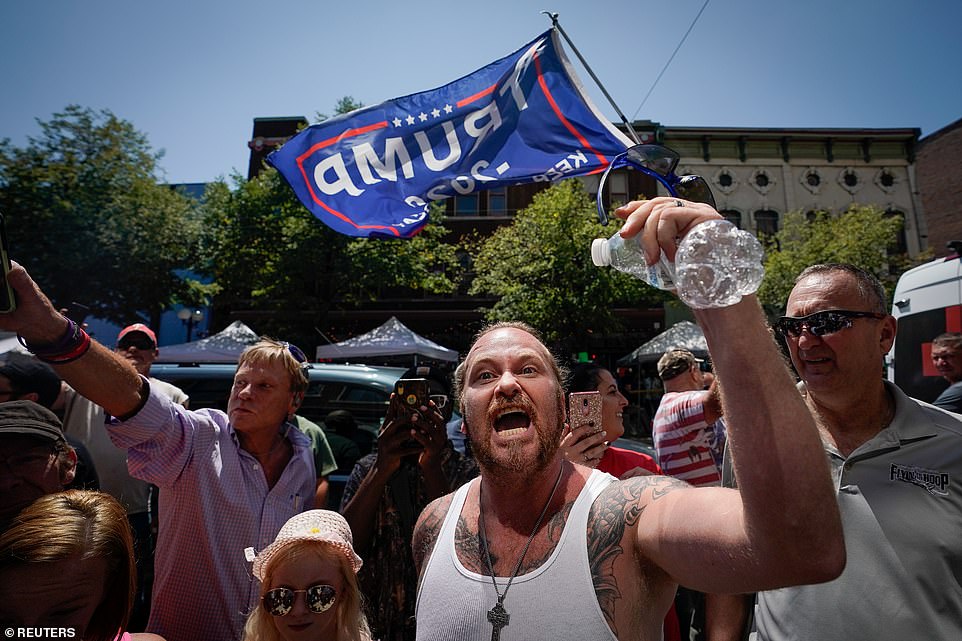 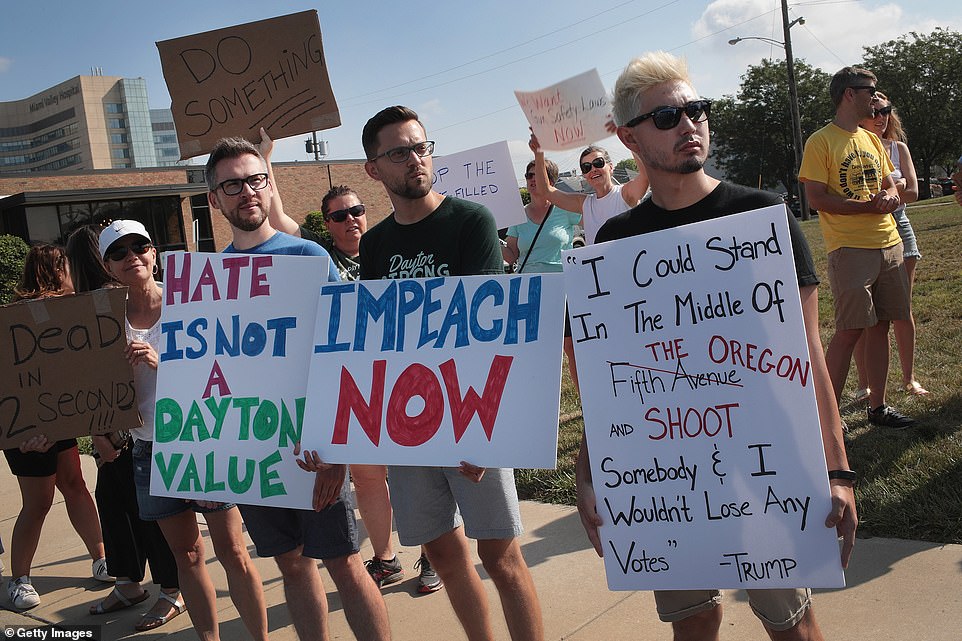 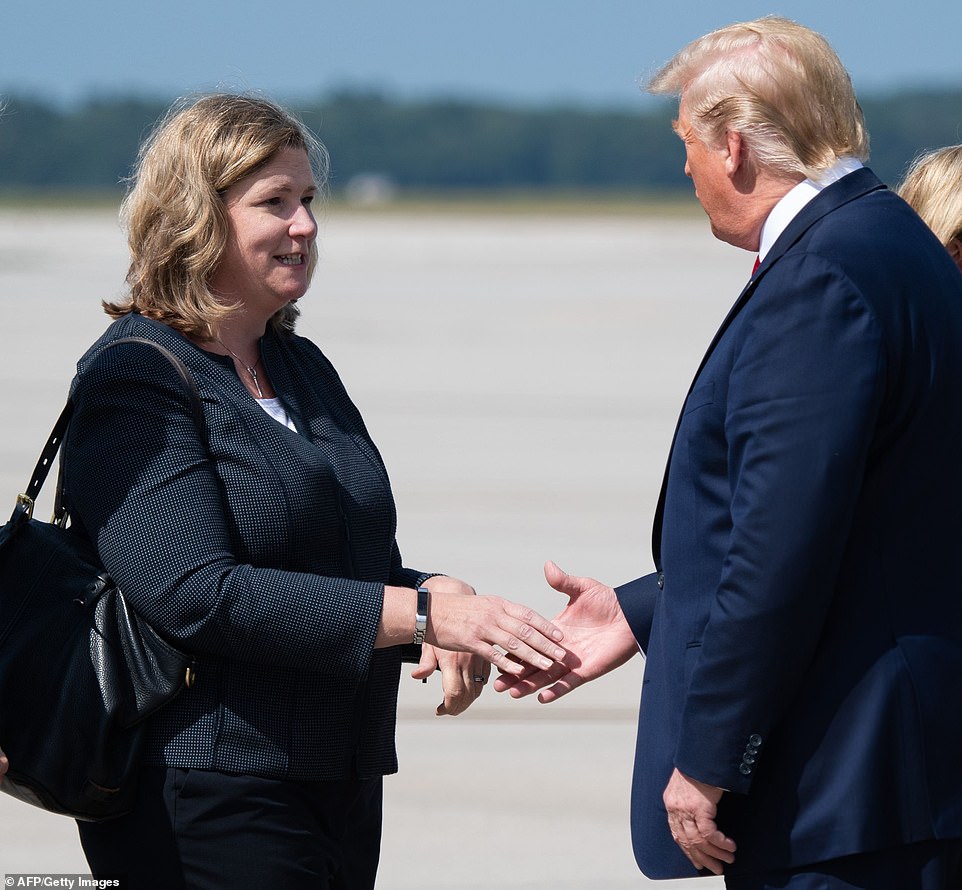 TEPID GREETING: At the airport, Dayton Mayor Nan Whaley shook the president's hand on the tarmac at Wright-Patterson Air Force Base 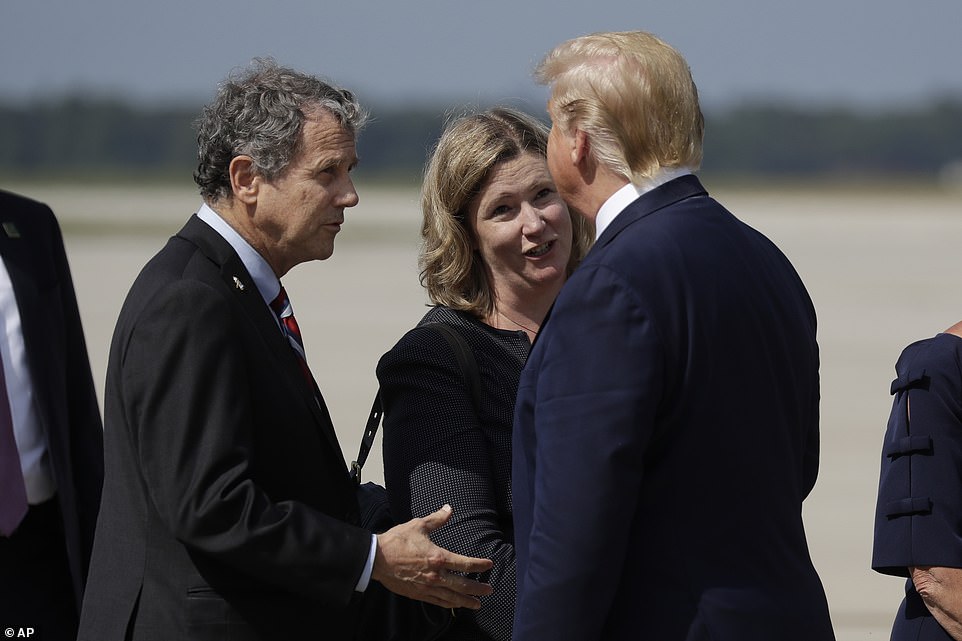 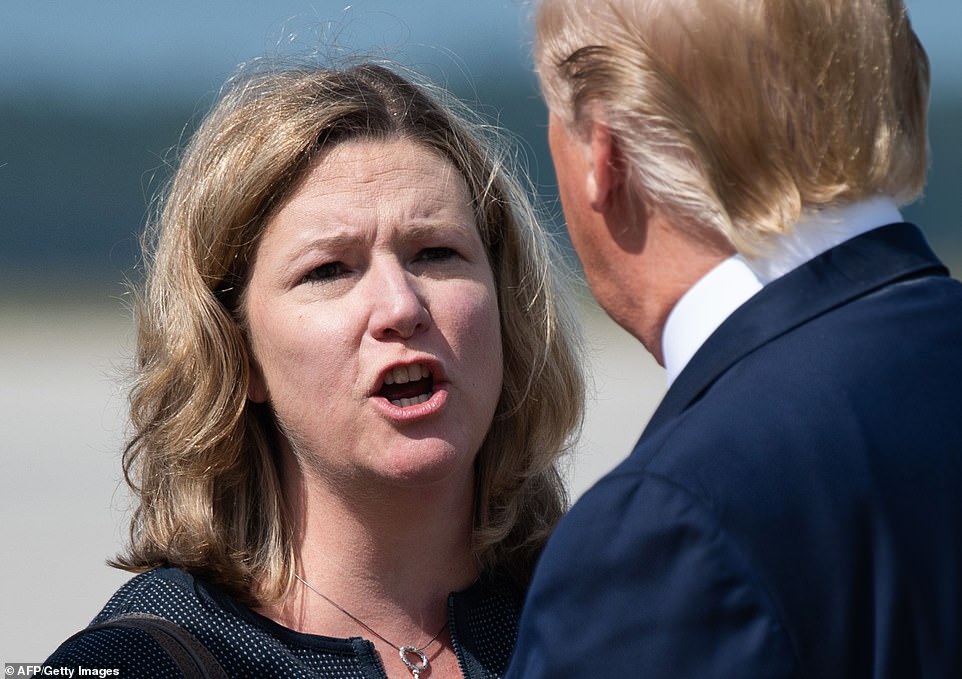 Whaley was also critical of Trump, saying his post-shooting remarks that barely mentioned firearms were 'painful' and 'disappointing, but she'd welcome him to her city, anyway 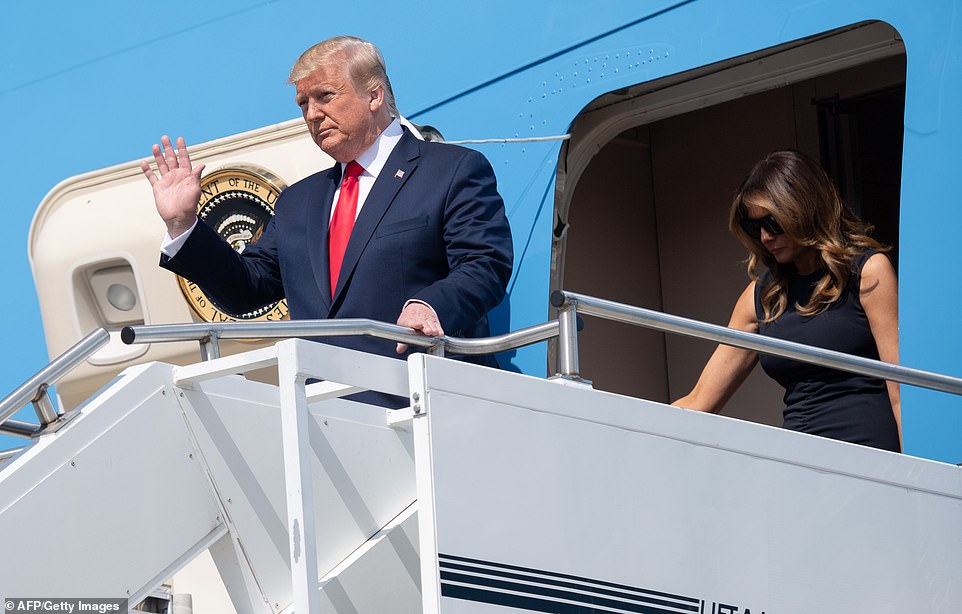 Donald Trump and First Lady Melania touched down in Dayton Wednesday to mourn the nine victims of Connor Betts – after the president unleashed on 'fake news,' claiming the murderer's left-wing sympathies were being ignored

Speaking on the South Lawn to reporters, the president also appeared to give his backing to tougher background checks before people can buy guns and suggested he would force Republicans to follow his lead.

The party's senators had appeared to be getting behind a more limited 'red flags' law, which would keep guns from dangerous people but Trump said: 'I'm looking to do background checks. I think background checks are important.'

The trip to Dayton and El Paso represents a major test of Trump's public determination to bring unity in the wake of the mass shootings.

Democrats have accused his rhetoric on immigration of being part of the reason for the rise of white supremacist domestic terrorism and pointed to similarities between the 'manifesto' left by Walmart murderer Patrick Crusius, which spoke of 'invasion' by Hispanics, and the president's own speeches.

At the airport, Whaley shook the president's hand on the tarmac alongside Ohio Senator Sherrod Brown - a Democrat who said he wouldn't meet with Trump over 'racist rhetoric' but apparently changed his mind.

Whaley was also critical of Trump, saying his post-shooting remarks that barely mentioned firearms were 'painful' and 'disappointing, but she'd meet with him in Ohio, anyway. The Democrat said she hoped Trump's trip would 'add value' to Dayton and he'd clarify his position on gun control.

She said at a news conference that she didn't have an opportunity to speak to him about his tone in the brief time together but she told him that the AR-15 the killer used shouldn't be legal.

'I think he heard me. I don't know if he will take action. I'm hoping for the people of Dayton that he does,' she said.

Ahead of his Wednesday trip he said he supported stricter background checks for the mentally ill and claimed Dayton mass shooter 'supported' the left-wing politicians who are competing for the presidency while deflecting from charges that his own, fiery rhetoric encouraged an El Paso mass murderer.

'If you look at Dayton that was a person who supported, I guess you would say, Bernie Sanders I understood, Antifa I understood, Elizabeth Warren I understood. Had nothing to do with President Trump,' he argued on the South Lawn of the White House as he prepared to leave for the Ohio city.

Trump claimed that Sanders, Warren and other unnamed Democrats who are 'low in the polls' were trying to score political points by calling him a racist and associating him with mentally-ill shooters.

'These are people that are looking for political gain. I don't think they're getting it, and as much as possible I've tried to stay out of that,' he claimed seconds after he levied the searing attack in which he'd bashed Warren and Sanders by name.

He said minutes later, 'I would like to stay out of the political fray. As I was saying and just came out, the Dayton situation, he was a fan of ANITFA. He was a fan of Bernie Sanders and Elizabeth Warren. Nothing to do with Trump, but nobody ever mentions that. No, I don't blame Elizabeth Warren and I don't blame Bernie Sanders in the case of Ohio.'