President Trump said Tuesday that he has “no idea” whether a conspiracy theory he promoted on Twitter claiming that former President Bill Clinton was somehow responsible for disgraced financier Jeffrey Epstein’s death in a New York federal prison is actually true. The president then went on to stoke the very same rumors of foul play.

“I have no idea,” Trump told reporters when asked if he really thought the Clintons were involved in Epstein’s death. “I know he was on his plane 27 times, and he said he was on the plane four times. But when they checked the plane logs, Bill Clinton, who was a very good friend of Epstein, he was on the plane about 27 or 28 times, so why did he say four times? And then the question you have to ask is ‘Did Bill Clinton go to the island?’ because Epstein had an island that was not a good place as I understand it, and I was never there. So you have to ask, ‘Did Bill Clinton go to the island?’ If you find that out, you’re going to know a lot.”

Flight logs released by Gawker in 2015 showed Clinton taking over two dozen flights on Epstein’s private plane, but the Clintons, in a statement released after Epstein’s July arrest on sex trafficking charges, said it was only four trips — not specifying the number of flights. In September 2002, Clinton and Epstein went on a tour of five African countries along with actors Kevin Spacey and Chris Tucker for what Clinton’s aides have said was for “democratization, empowering the poor, citizen service, and combating HIV/AIDS.” The Daily Beast reported in July that Epstein visited Clinton’s White House multiple times during his tenure.

Trump also had close ties to Epstein, whose Palm Beach mansion was not far from the president’s private club, Mar-a-Lago. MSNBC recently aired video, from 1992, of Trump and Epstein partying together at the president’s Florida estate and commenting on the appearance of several female guests.

“I’ve known Jeff for fifteen years. Terrific guy,” said Trump in a 2002 New York magazine profile of Epstein. “He’s a lot of fun to be with. It is even said that he likes beautiful women as much as I do, and many of them are on the younger side. No doubt about it — Jeffrey enjoys his social life.”

On Saturday night, Trump retweeted a pair of messages that, without evidence, tied Epstein’s death to the Clintons.

One originally posted by comedian Terrence K. Williams misspelled Epstein’s first name, and asserted that “#JefferyEpstein had information on Bill Clinton & now he’s dead. ... We know who did this.”

Clinton’s press secretary, Angel Ureña, dismissed Trump’s retweet on Saturday, writing on Twitter, “Ridiculous, and of course not true — and Donald Trump knows it. Has he triggered the 25th Amendment yet?” 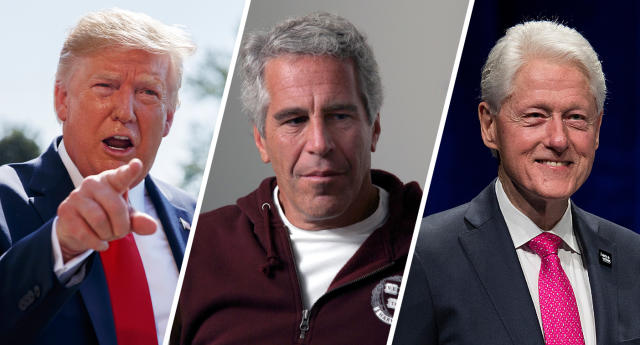 Epstein was found unconscious in his cell in the Metropolitan Correctional Center (MCC), the federal jail in lower Manhattan. He was later pronounced dead at a nearby hospital. As soon as the news of Epstein’s death was announced, conspiracy theories began to flow that he had been killed — or rescued via a body double — due to his ties to the political elite and billionaires. The New York Times reported that the medical examiner was confident his death was suicide by hanging but was waiting for more information before releasing her report.

Documents tying other figures to Epstein began to be released the day before his death,starting with sealed records related to a defamation lawsuit that Epstein’s self-described “sex slave” Virginia Roberts Giuffre filed against Ghislaine Maxwell, who was a guest at Chelsea Clinton’s 2010 wedding. Giuffre alleges that Epstein told her to have sex with hedge fund billionaire Glenn Dubin, former New Mexico Gov. Bill Richardson and former Democratic Senate Majority Leader George Mitchell. Prince Andrew of Britain also has ties to the hedge fund magnate, but all the men have denied allegations of criminal wrongdoing.

Many of the questions about Epstein’s death arose because MCC is one of the most secure jails in the country, and Epstein, following an earlier suicide attempt, was being held in the Special Housing Unit, where inmates are under heightened protection. NBC News reported, however, that Epstein was not on suicide watch and that his cellmate had been removed for a yet-to-be-determined reason. Epstein had been at MCC since July 6, after FBI agents arrested him upon his return to the U.S. from France on his private jet.

The amount and source of Epstein’s wealth, apart from his association with retail mogul Leslie Wexner, remains something of a mystery. His Manhattan mansion has been described as having a “creepy décor,” while his private island includes a lavish, gold-domed temple-like structure. When Epstein’s New York home was raided, investigators found a cache of videos in a safe that were described as potentially containing compromising images of third parties. The New York Times reported in July that Epstein had plans to “seed human race with his DNA” by impregnating women at his New Mexico ranch.

The latest charges were not the first faced by Epstein. He was charged by federal prosecutors in Florida in 2007 for, as the Miami Herald put it in its award-winning reporting on the case, “assembling a large, cult-like network of underage girls — with the help of young female recruiters — to coerce into having sex acts behind the walls of his opulent waterfront mansion as often as three times a day.” Epstein received what observers consider unusually lenient treatment by the U.S. attorney in Miami at the time, Alex Acosta. Acosta served as Trump’s secretary of labor but stepped down amid a slew of calls for his resignation after Epstein’s arrest earlier this summer. In that case, Epstein was defended byHarvard professor Alan Dershowitz andformer special counsel Ken Starr.