Democratic congressional leaders said they walked out of a White House meeting Wednesday on Syria after what House Speaker Nancy Pelosi called a “meltdown.”

After top Democrats left the bipartisan meeting with Trump, Pelosi told reporters that the president appeared “shaken up” by a House vote condemning his decision to remove U.S. forces from northern Syria. The House approved the resolution in an overwhelming 354-60 vote, as even a majority of Trump’s Republican Party supported it.

“That’s why we couldn’t continue in the meeting because he was just not relating to the reality of it,” Pelosi said outside the White House,in only the latest instance of a gathering between the president and Democrats blowing up.

Senate Minority Leader Chuck Schumer, D-N.Y., described the meeting as more of a “nasty diatribe” than a “dialogue.” He said Trump called Pelosi a “third-rate politician” — though Pelosi later clarified the president used the term “third grade politician.” House Majority Leader Steny Hoyer, D-Md., added that he had “never” seen a president “treat so disrespectfully a coequal branch” of government.

House Minority Leader Kevin McCarthy, a Republican who voted for the House measure to oppose pulling troops out of northern Syria, told reporters that Pelosi “stormed out” of the meeting. He called her behavior “unbecoming” and argued Pelosi tried to make the gathering unproductive.

The White House declined to comment on whether Trump called Pelosi a “third-rate politician.”

The vote earlier Wednesday added to the pressure the president faces as Turkey pushes ahead with an offensive in the region. The measure in part opposes the decision to end the military operations, urges Turkish President Recep Tayyip Erdogan to cease the offensive and calls on the U.S. to support Syrian Kurdish communities.

During the meeting Wednesday, Schumer brought up former Defense Secretary James Mattis’ recent comment that the Islamic State group “will resurge” in Syria after the troop withdrawal, according to NBC News. Trump then called the former United States Marine Corps general “the world’s most overrated general,” saying “he wasn’t tough enough,” NBC reported.

The vote also came as Trump lashed out at Democrats for their impeachment inquiry into Trump and whether he abused his power by urging Ukraine to investigate his political rival, former Vice President Joe Biden. Pelosi said the issue did not come up during the meeting Wednesday.

Lawmakers who oppose Trump withdrawing troops worry it will lead to the slaughter on the ground of Kurdish forces, U.S. allies in the fight against the Islamic State group. Trump has repeatedly downplayed the potential for Turkey to harm Kurdish troops, even saying Wednesday that the Kurds are “no angels.”

During a news conference with Italy’s president Wednesday, Trump argued that “I didn’t give [Turkey] the green light” to launch an offensive in Syria.

Amid the backlash, the White House has condemned the Turkish offensive. Trump on Monday announced sanctions on Turkish officials and an increase in tariffs on Turkish steel to 50%. 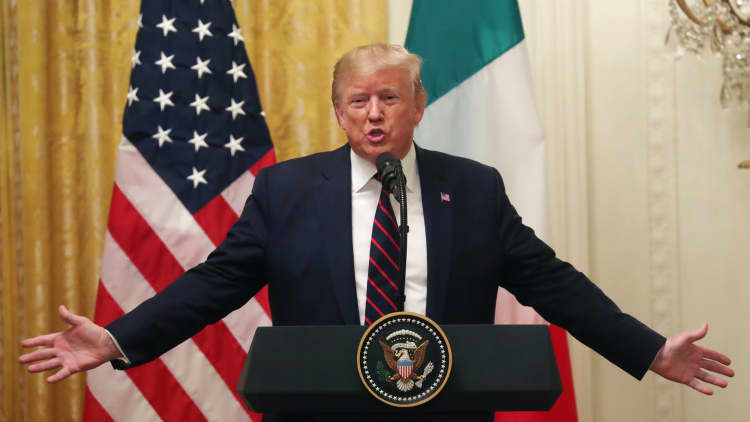 Trump has said he pulled the troops from northern Syria in order to follow through on his promise to get the U.S. out of “endless wars.” However, the administration announced last week that it would put thousands more forces in Saudi Arabia. Trump contended Wednesday that the U.S. is sending forces to the oil-rich nation because it “agreed to pay for the full cost of that appointment, and much more.”

Sen. Lindsey Graham, a South Carolina Republican and Trump ally, and Sen. Chris Van Hollen, D-Md., plan to introduce sanctions on Turkey on Thursday. Graham tweeted Wednesday that he fears “this is a complete and utter national security disaster in the making” and said he hopes Trump “will adjust his thinking.”

Responding to Graham’s criticism, the president said “Lindsey Graham would like to stay in the Middle East for the next 1,000 years.”

Vice President Mike Pence and Secretary of State Mike Pompeo are heading to Turkey on Wednesday, saying they plan to meet with Erdogan. The Turkish leader had earlier said he would not meet with the U.S. officials, but he later changed his mind, according to a government spokesman.