As President Donald Trump declared Monday “Washington Nationals Day” to celebrate the team’s World Series title, he chronicled the Nats’ season from a 19-31 record in May to hoisting the Commissioner's Trophy in Houston last week.

Along the way, he arrived at Washington’s ninth-inning comeback against the New York Mets on Sept. 4. Down six runs with three outs to go, the Nats erased the deficit, capped by catcher Kurt Suzuki’s three-run, walk-off home run.

Trump called Suzuki to the podium and as he made his way there, the 36-year-old put on a red “Make America Great Again" hat, a trademark of Trump and his supporters since he jumped into politics in 2015.

Trump looked surprised by the gesture and hugged Suzuki from behind.

The president and Suzuki shook hands, and then Trump said, "What a job he did. I didn't know that was going to happen."

Suzuki played 85 games for the Nationals in the regular season, posting an .809 OPS with 17 homers and 63 RBI. He started 10 games in the postseason, going 3-for-30 with a home run.

Nationals catcher Kurt Suzuki walks up to a microphone outside the White House and whips out a #MAGA hat. 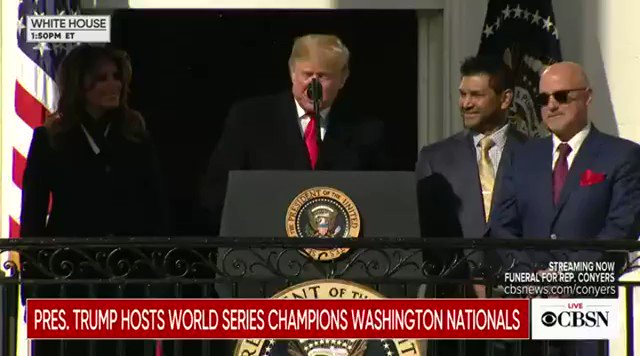 Suzuki was not the only National to offer outward support for the president. Ryan Zimmerman, the organization’s first draft pick in 2005, presented Trump with his own customary No. 45 jersey and added some kind words.

"This is an incredible honor I’d like to think none of us will ever forget," Zimmerman said. "We’d also like to thank you for keeping everyone here safe in our country and continuing to make America the greatest country to live in the world."

Not all of the Nationals were present. CloserSean Doolittle was the first player to publicly declinethe invitation over the weekend. Other players who did not make an appearance Monday: third baseman Anthony Rendon; outfielders Michael A. Taylor, Victor Robles and Wilmer Difo; and pitchers Joe Ross, Javy Guerra and Wander Suero.