The illegal immigrant population that entered the United States from the southwest border region jumped 550,000 this year, a combination of those who crossed the U.S.-Mexico border undetected and those released into the country after being apprehended at key border crossings, according to a new report.

The numbers break down this way:

“The 'illegal' population of the U.S. (if we include asylum seekers in that group) will have increased by 550,000 in FY 2019,” according to immigration analyst Steven Kopits, president ofPrinceton Policy Advisors. 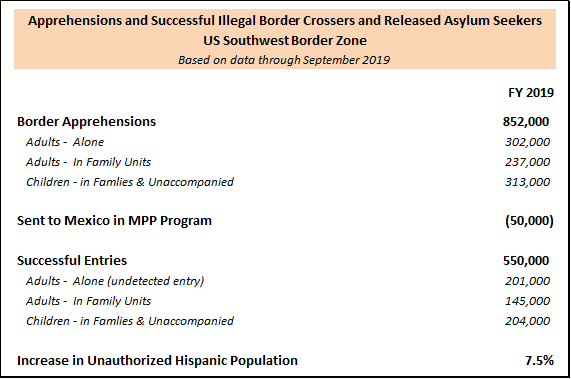 In his analysis, Kopits used the historical averages for illegal immigrants let into the country while their claims for asylum and other freedoms work through the legal system.

President Trump has promised to cut illegal immigration but has been thwarted in part by slow construction of a new border wall and judicial challenges to his get-tough policies.

However, Kopits noted that the administration’s diplomatic agreement to get Mexico to hold immigrants seeking to cross the border is working. He noted that some 50,000 immigrants were deported to holding areas in Mexico.

His report said, “Approximately 852,000 persons were apprehended entering the U.S. southwest border illegally in FY 2019. Of these, roughly 550,000 were children traveling alone or children and adults in family groups. News reports indicate that approximately 50,000 of this group were deported to holding camps in Mexico under the Migrant Protection Protocol. Of those remaining in the U.S., we estimate that 70% were released into the U.S. interior pending status hearings, for example, the adjudication of asylum claims. We have been unable to find actual release rates from CBP, thus this number could be low or high and is subject to delays from time of apprehension to release."