TheDow Jones Industrial Averagerallied to record levels on Friday, reaching 28,000 for the first time ever, after White House economic advisor Larry Kudlow said China and the U.S. were getting close to reaching a trade deal.

Apple is the best-performing stock in the Dow since July 11, when the index first reached 27,000. In that time, Apple shares are up more than 30%. Intel, J.P. Morgan, United Technologies and Home Depot are some of the stocks that have also rallied more than 10% since July 11. 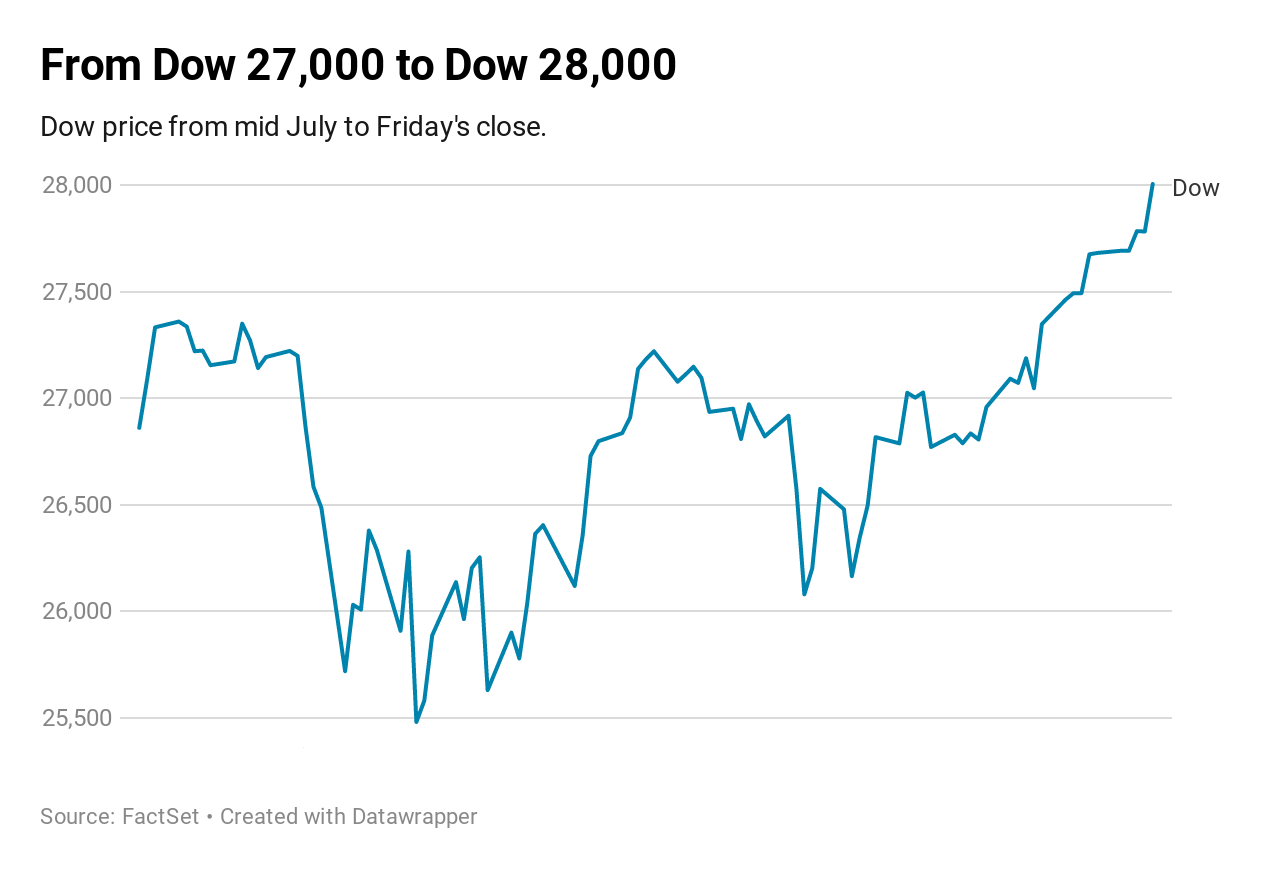 The Dow notched its fourth week of consecutive gains, rising 1.2% in that time. The S&P 500 advanced 0.9% for the week, posting its sixth straight weekly gain. That’s the longest streak for the S&P 500 since 2017, when it climbed for eight straight weeks. The Nasdaq rose for a seventh consecutive week, advancing 0.8%.

Trade-sensitive names such as Caterpillar, Boeing, Apple and Micron Technology all rose at least 1.2% on Friday. Gold, meanwhile, fell as safe-haven assets pulled back broadly.

“There’s quite a bit of optimism that we’re going to get a deal,” said Gibson Smith, founder of Smith Capital Investors. “That would take away some of the uncertainty off the table. Unfortunately … we’ve had so many rounds of being told a deal is imminent and then it’s not. So, it’s still a very headline-driven market.”

Kudlow, the National Economic Council director, said Thursday that a deal between the two nations was approaching, highlighting constructive discussions with Beijing. His comments came after multiple reports suggested both sides were at loggerheads over the terms of a phase one trade agreement.

“The Kudlow comments are all that really matters to the macro narrative for Friday,” said Adam Crisafulli, founder of Vital Knowledge, in a note. “Looking forward for the SPX, it seems like the index will struggle to come for sale until there is a formal decision on ‘phase one’ – any signs of doubt are being dismissed while words of encouragement can still provide upside pressure.”

The major averages closed little changed on Thursday as recent jitters around U.S.-China trade tempered the excitement around the market’s record-setting rally. The S&P 500 and Dow are up 3.4% and 2.8%, respectively, over the past month through Thursday’s close. The Nasdaq Composite has gained 4.1% in that time.

Jeff Zipper, managing director of investments at U.S. Bank Private Wealth Management, noted investors have taken comfort in the fact that “thing’s aren’t as bad as originally expected.” He added, however, that the market is “a bit overbought” at current levels.

Health care stocks rose more than 2% after the Trump administration released a plan that would force hospitals andinsurance companies to disclosed the rates they negotiated. UnitedHealth, Humana and Danaher were all up more than 4%.