Nonfarm payrolls surged by 266,000 in November, better than the 187,000 expected by economists polled by Dow Jones.

The jobs market turned in a stellar performance in November, with nonfarm payrolls surging by 266,000 and the unemployment rate falling to 3.5%, according to Labor Department numbers released Friday.

Those totals easily beat the Wall Street consensus. Economists surveyed by Dow Jones had been looking for solid job growth of 187,000 and saw the unemployment rate holding steady from October’s 3.6%. The decline in November’s jobless rate came amid a corresponding 0.1 percentage point drop in the labor force participation rate, to 63.2%.

“Bottom line, America is working,” Larry Kudlow, director of the National Economic Council, told CNBC’s “Squawk on the Street.” “These are very strong numbers. These are happy numbers, these are sunny Friday numbers.”

The jobs growth was the best since January’s 312,000 and well clear of the November 2018 total of 196,000. While hopes already were up, much of that was based on the return ofGeneral Motorsworkers following a lengthy strike. That dynamic indeed boosted employment in motor vehicles and parts by 41,300, part of an overall 54,000 gain in manufacturing. The vehicles and parts sector had fallen by 42,800 in October.

However, the job gains were spread among a multitude of sectors. Health care added 45,000 positions after contributing just 12,000 in October.

Leisure and hospitality increased by 45,000 and professional and business services rose by 31,000; the two sectors respectively are up 219,000 and 278,000 over the past 12 months. Wage gains also were a touch better than expectations.

Average hourly earnings rose by 3.1% from a year ago, while the average workweek held steady at 34.4 hours.

Economists had been looking for wage gains of 3%. A separate gauge of unemployment that includes discouraged workers and the underemployed declined as well, falling to 6.9%, one-tenth of a percentage point below October.

“This is a blowout number and the U.S. economy continues to be all about the jobs,” Tony Bedikian, head of global markets for Citizens Bank said in a note. “The unemployment rate is at a 50-year low and wages are increasing. Business owners may be getting more cautious due to trade and political uncertainty and growth may be slow, but consumers keep spending and the punch bowl still seems full.”

The unemployment rate of 3.5%, down from 3.6% in October, is back to the 2019 low and matches the lowest jobless rate since 1969. The U.S. economy needs to create about 107,000 jobs a month to keep the unemployment rate steady, according to calculations from the Atlanta Federal Reserve.

There was some thought that the November count might disappoint afterADP reported Wednesdaythat private payrolls rose just 67,000. The Bureau of Labor Statistics, though, put that number at 254,000, with the remaining 12,000 jobs created at the government level.

“Today’s job report, more than any other report in recent months, squashed any lingering concerns about an imminent recession in the US economy,” said Gad Levanon, head of the Conference Board’s Labor Market Institute. “Employment growth also shows no signs of slowing further despite the historically low unemployment rate.” 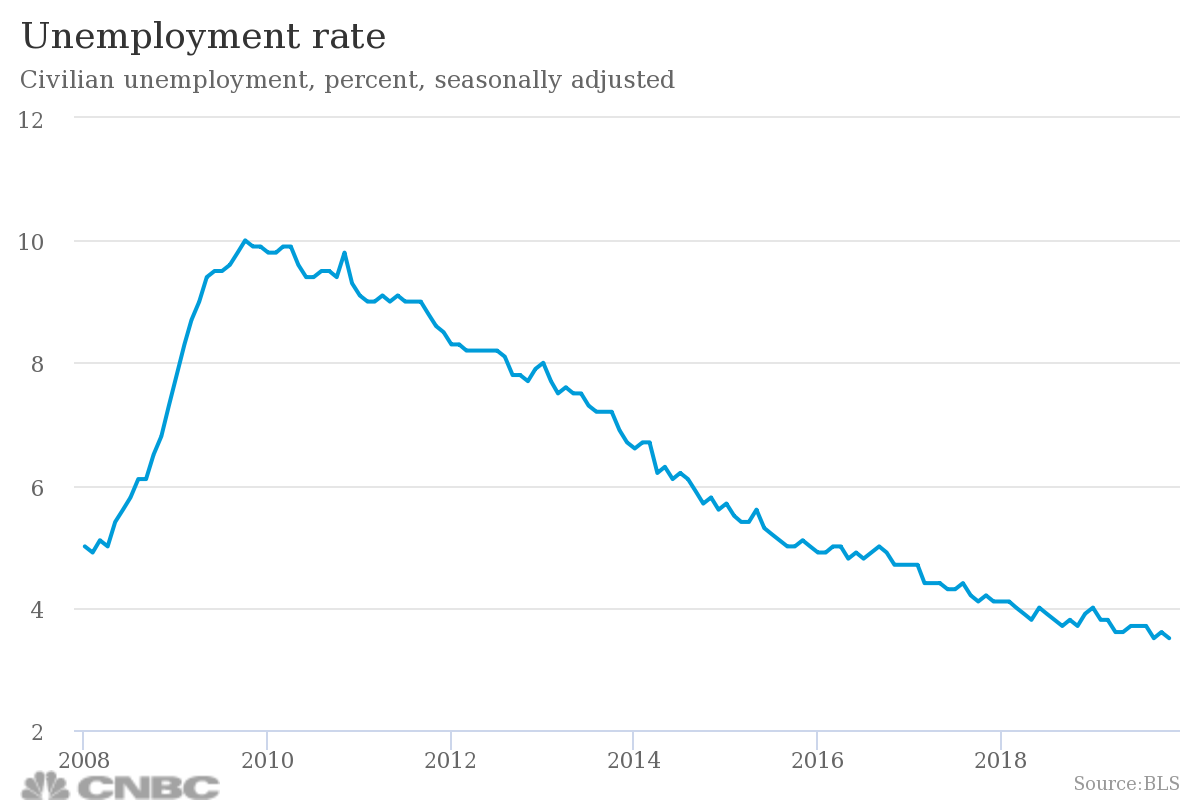 The news was not all good. As the holiday shopping season accelerated, retail companies added just 2,000 net hires as gains in general merchandise of 22,000 and motor vehicle and parts dealers of 8,000 were offset by an 18,000 loss in clothing and clothing accessories.

The strong jobs report comes amid a challenging year for the U.S. economy. Recession fears surged in late-summer amid worries that a global slowdown would spread to American shores. The back-and-forth lobbing of tariffs between the U.S. and China also raised fears of instability, and the bond market sent what has been a reliable recession indicator when short-term government yields rose above their longer-term counterparts. The Fed reacted by cutting its benchmark interest rate three times, part of what officials deemed insurance against a potential slowdown.

The Fed meets next week, and officials have been clear that they plan no further rate changes unless conditions change significantly.