The private pathologist hired by Jeffrey Epstein's family to investigate the pedophile's death claims newly-released photos from the autopsy reaffirm his conclusion that it wasn't a suicide.

Dr Michael Baden, who was paid by Epstein's brother Mark to oversee the autopsy following the millionaire's death in his New York City prison cell in August, said the injuries to Epstein's neck, captured in images from the medical examiner, 'are more indicative of homicide'.

'It was too wide and too smooth,' the pathologist said during aFox Newsinterview on Monday. 'This is a rougher injury.'

He also noted that there was no blood on the noose, and said that the three neck fractures Epstein suffered would not have been caused by hanging. 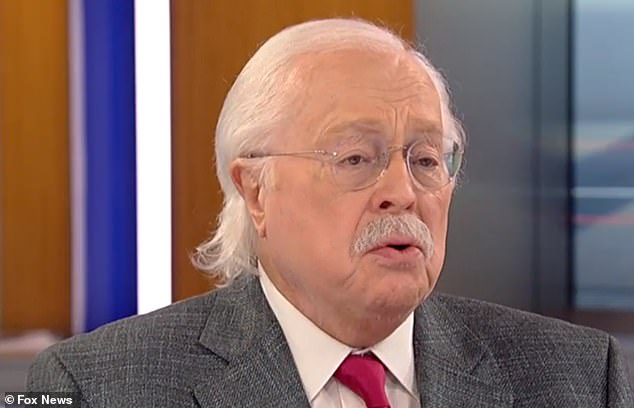 Dr Michael Baden, the private pathologist hired by Jeffrey Epstein's family to investigate the pedophile's death, claims newly-released photos from the autopsy reaffirm his conclusion that it was a homicide rather than a suicide 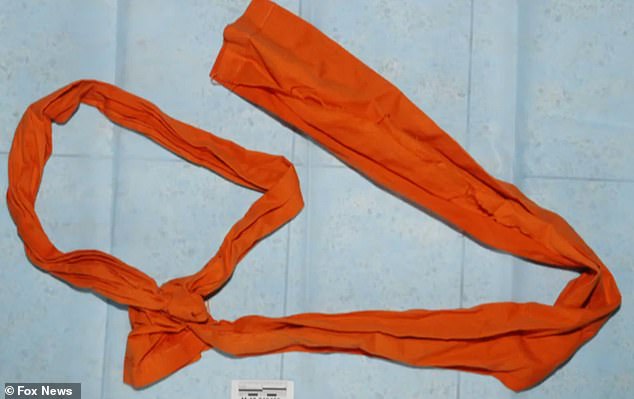 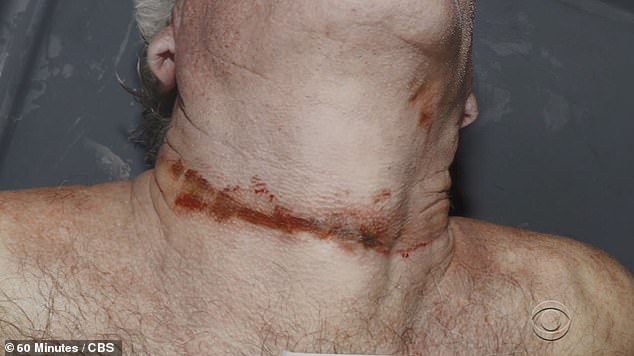 Graphic images from the autopsy report showed a deep, bloody ligature mark on Epstein's neck. Baden said there was no way the mark could have been made by a bed sheet

Epstein was found dead on August 10 in the prison cell where he was awaiting trial on sex trafficking charges.

His death was officially ruled a suicide by New York City Medical Examiner Barbara Sampson but prompted widespread conspiracy theories and speculation that he had instead been murdered. 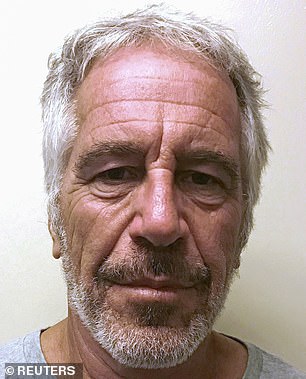 Baden said it was 'premature' to close the case as a suicide as many questions surrounding Epstein's death remain unanswered.

'I think there's a lot of information that still hasn't been revealed yet that is essential in order to arrive at a conclusion, whether this is a suicide or homicide,' he said.

'I think the important thing is to find out what was seen when the guards first went into the cell. Was he hanging? Was he on the ground? As some people reported when he was found.'

Baden also charged that first responders 'destroyed a lot of the forensic evidence' by removing Epstein's body from the cell as quickly as they did.

'EMS is not supposed to remove dead bodies from jails,' he said. 'They're supposed to have a whole forensic workup, what kind of forensic evidence is on the clothing, how long the person was dead.

'We can tell from the ligature mark that he had been -- there was a tight ligature around his neck for many hours, and the front of the neck, before he was found--so he was dead for a long time. But we could be more specific about that if somebody tested out the stiffness of the body, et cetera, at the scene.' 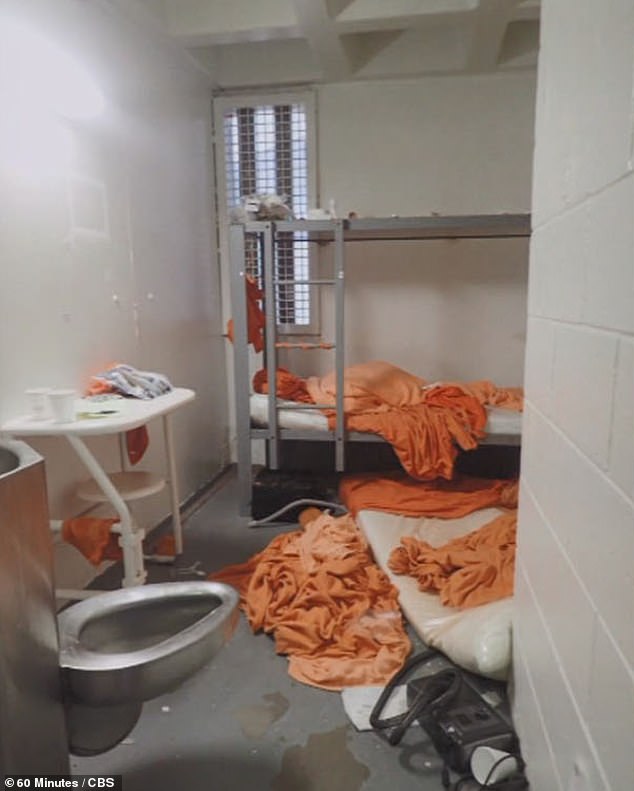 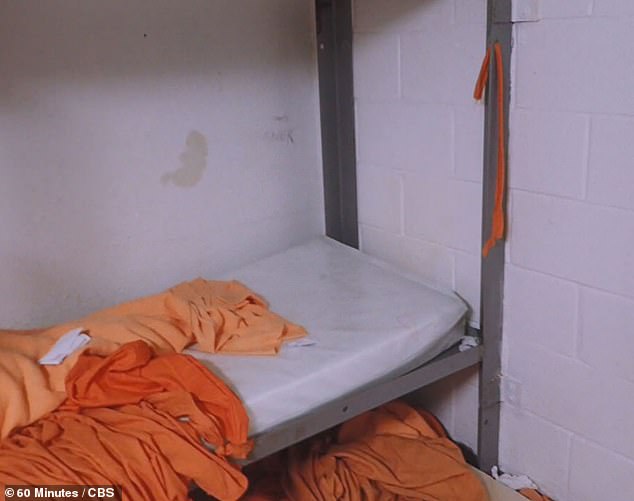 The photos reveal that fragments of material were found hanging from a window, while a large strip of bedding was also looped through a hole on the top bunk bed 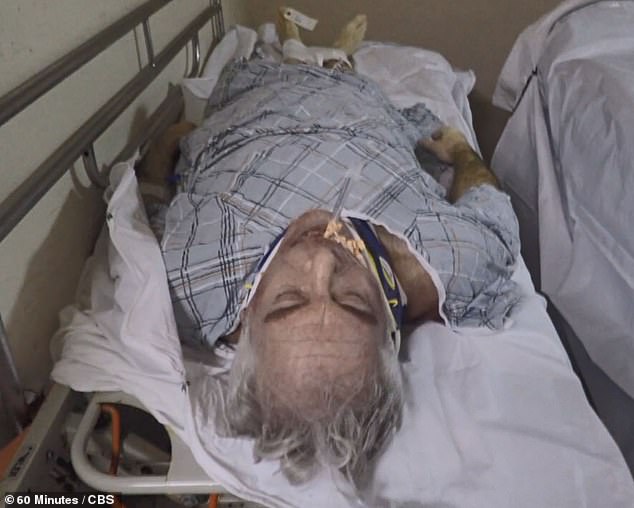 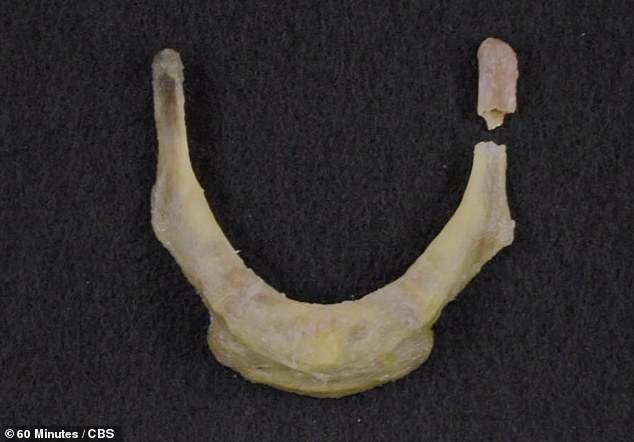 Epstein's autopsy report found his neck had been broken in several places, including the hyoid bone located near the Adam's apple. Pictured above is his broken hyoid bone

Earlier on Monday Baden appeared on CBS This Morning and repeated his previous assertion that the fractures in Epstein's neck were indicative of homicide rather than suicide.

'[With] hanging suicide 90 percent of the time there are no fractures, maybe 10 percent, 15 percent, they have hyoid or thyroid fracture.

'You don't have three fractures with the weight of the body on the ligature. You to have a lot more pressure by ligature or by hands to get those fractures.'

Baden also questioned the fact that investigators have not said whether there was DNA on the noose.

'The FBI or the medical examiner would have done swabs for DNA on the ligature. Whose DNA is on it? Was it Epstein alone ore Epstein and somebody else?' he asked.

Baden said that Epstein's family believes his death may have been a homicide based on the autopsy results and that they are desperate for the truth to be revealed.

'There is no advantage to the family whether it's a homicide or suicide,' Baden told CBS This Morning on Monday. 'There is no money involved. They just want the truth.

'The brother [Mark] or the estate would just as soon have this to be a suicide, because there is no advantage to them to be a homicide.

'Mark Epstein is now concerned about a homicide if his brother was killed because he knew too much, is he also at jeopardy? Are other people at jeopardy?'

Baden rejected the notion that he made the homicide determination because he's being paid by Epstein's family and that's what they believe.

Citing his time as New York City medical examiner in the late 1970s, Baden said his professional opinion has never been influenced by who is paying him. 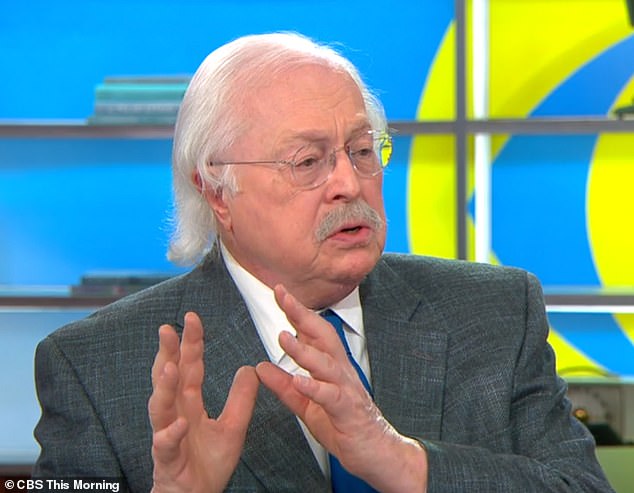 .@GayleKing asks Dr. Michael Baden if it is “in his best interest” to dispute the finding of suicide because he was hired by Epstein's family. https://cbsn.ws/2QKMCAe 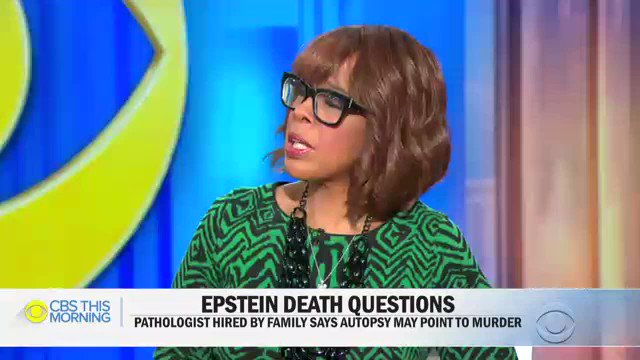 .@AnthonyMasonCBS asks Dr. Michael Baden about the position of Jeffrey Epstein’s body when he was found dead. https://cbsn.ws/2QKMCAe 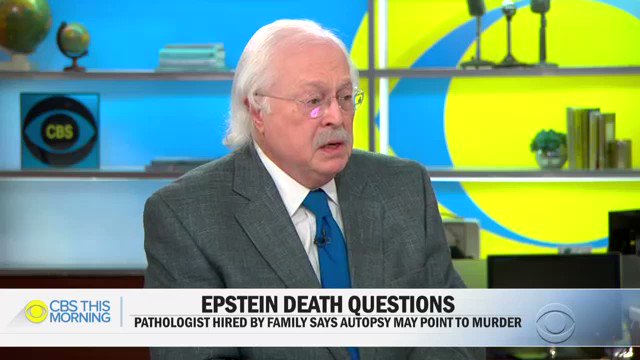 Graphic photographs from Epstein's autopsy were revealed for the first time during a 60 Minutes segment on Sunday - along with other images from inside his cell.

Multiple nooses fashioned from the orange bedding were found fastened to the window and top bunk bed and on the floor.

A handwritten note, which was found alongside a ball point pen, contained complaints he seemingly had about prison conditions.

Among the complaints were that one guard had 'kept me in a locked shower stall for 1 hour' and another 'sent me burnt food'. 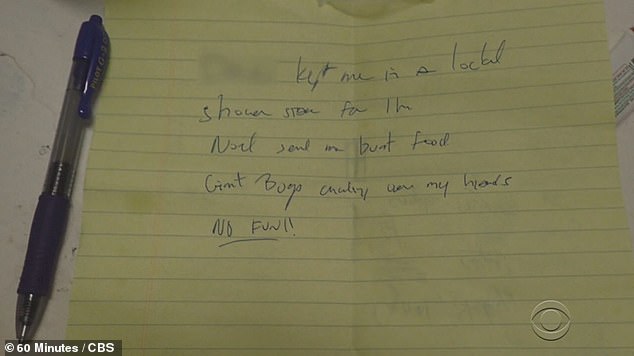 A handwritten note found in Epstein's cell, which was found alongside a ball point pen, contained complaints he seemingly had about prison conditions including that a guard had kept him locked in a shower stall for an hour 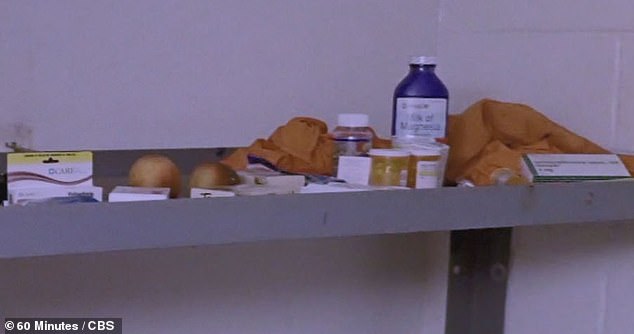 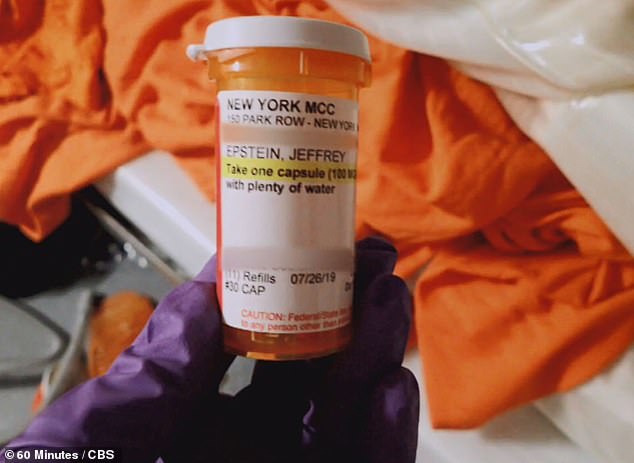 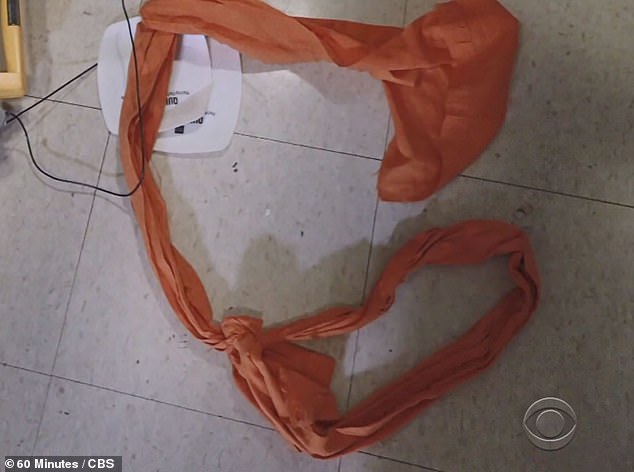 The procedures that should've been followed in Epstein's jail unit:

The two guards were required to jointly conduct institutional counts at 4pm, 10pm, 12am, 3am and 5am of the prisoners in the unit.

Both officers are required to walk the six levels of the unit to count and observe every inmate.

They then have to each fill in and sign a form with the date and time the counts were performed.

The slips are then collected and taken to the prison's control center where officers double check them to make sure every inmate is accounted for.

In addition to the count, officers assigned to the unit Epstein was in are required to walk around every 30 minutes to ensure inmates are 'alive and accounted for', according to the indictment.

They are also required to sign forms saying they carried out these 30-minute checks.

In total, the two guards were required to carry out five institutional counts.

Prosecutors say surveillance video shows the officers did not conduct a single count despite them logging that they did.

They are also accused of falsely signing off that they had carried out more than 75 separate 30-minute checks.

The circumstances surrounding Epstein's death continue to raise questions about protocol at the federal prison.

The two prison guards who were responsible for checking in on Epstein the night he hanged himself have since been charged with falsifying records and conspiracy.

Tova Noel, 31, and Michael Thomas, 41, - who have pleaded not guilty - were allegedly shopping online for furniture and napping instead of checking on the millionaire pedophile in his jail cell just 15 feet away from them.

After they discovered Epstein dead, the officers allegedly told a supervisor they had 'messed up' and 'didn't do any checks' in the hours before he killed himself, according to a criminal complaint.

Noel and Thomas, who were assigned to Epstein's Special Housing Unit at the federal jail, are accused of failing to check on him every half-hour, as required, and of fabricating log entries to claim they had.

The two guards were required to jointly conduct institutional counts at 4pm, 10pm, 12am, 3am and 5am of the prisoners in the unit. They were supposed to walk the six levels of the unit to count every inmate.

In addition to that count, officers assigned to the unit Epstein was in were required to walk around every 30 minutes to ensure inmates are 'alive and accounted for', according to the indictment.

Prosecutors said surveillance video showed the pair did not conduct a single count despite them logging that they did.