When asked if he expects more protests in the wake of George Floyd's killing, Brees pointed to his WWII veteran grandfathers to explain his position

James rejected that argument, saying his father-in-law is also a veteran

Los Angeles Lakers star LeBron James has slammed Drew Brees's claim that athlete protests during the national anthem are disrespectful to the military, saying the New Orleans Saints quarterback is misinterpreting the peaceful demonstrations that began in the NFL with Colin Kaepernick in 2016.

Both Brees and James have maintained their long-held respective opinions on the subject of player protests amid uproar over the death ofGeorge Floyd, an unarmed black man, at the hands of Minneapolis police last week.

When asked on Wednesday about the possibility of more player protests in the NFL next season, Brees toldYahoo Financehe will 'never agree with anybody disrespecting the flag of the United States of America or our country.' 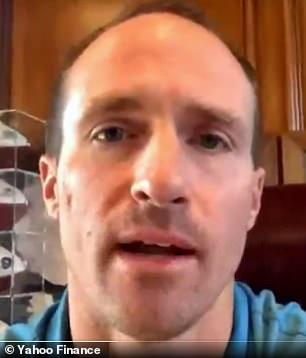 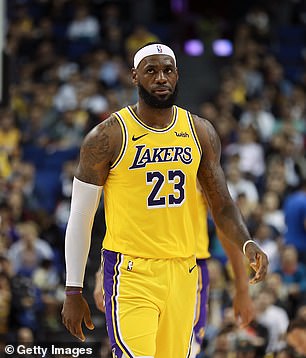 While Brees has refused to accept that protest as acceptable, James insists it had nothing to do with disrespecting the flag, country, or military

Kaepernick began protesting inequality and racist police brutality as a member of the San Francisco 49ers by refusing to stand for the national anthem throughout the 2016 season. Initially Kaepernick sat during the anthem until Nate Boyer, a former Green Beret, suggested he kneel so that he could be closer to his teammates instead of sitting on a distant bench.

'WOW MAN!!' James tweeted. 'Is it still surprising at this point. (sic) Sure isn't!

'You literally still don't understand why Kap was kneeling on one knee?? Has absolute nothing to do with the disrespect of [the flag] and our soldiers (men and women) who keep our land free. My father-in-law was one of those men who fought as well for this country. I asked him question about it and thank him all the time for his commitment. He never found Kap peaceful protest offensive because he and I both know what's right is right and what's wrong is wrong!'

James ended the tweets by writing to Brees, 'God bless you.'

'A few years ago we were criticized for locking arms in solidarity before the game,' Rodgers wrote on Instagram, referencing the Packers' player protests. 'It has NEVER been about an anthem or a flag. Not then. Not now. Listen with an open heart, let's educate ourselves, and then turn word and thought into action.'

Brees offered a lengthy explanation for why he continues to feel that way amid rising racial tension in the United States.

'Let me just tell what I see or what I feel when the national anthem is played and when I look at the flag of the United States,' Brees said. 'I envision my two grandfathers, who fought for this country during World War II, one in the Army and one in the Marine Corp. Both risking their lives to protect our country and to try to make our country and this world a better place.'

Devin and Jason McCourty, twins and fellow New England Patriots defensive backs, objected to Brees, saying it was wrong to imply that having military veteran relatives would inherently prevent someone from protesting during the anthem.

'This is a disgrace!' read a post on the McCourty twins' Twitter account. 'To speak about your grandfathers as if there weren't black men fighting next to them.Those men later returned to a country that hated them. Don't avoid the issue and try to make it about a flag or the military. Fight like your grandfathers for whats right!'

Brees also likened his grandfathers' sacrifice to those made by civil rights activists in the 1960s.

'So every time I stand with my hand over my heart looking at that flag and singing the national anthem, that's what I think about,' he continued. 'And in many cases, that brings me to tears, thinking about all that has been sacrificed. Not just those in the military, but for that matter, those throughout the civil rights movements of the '60s, and all that has been endured by so many people up until this point. And is everything right with our country right now? No, it is not. We still have a long way to go. But I think what you do by standing there and showing respect to the flag with your hand over your heart, is it shows unity. It shows that we are all in this together, we can all do better and that we are all part of the solution.'

Devin and Jason McCourty, twins and fellow New England Patriots defensive backs, objected to Brees, saying it was wrong to imply that having military veteran relatives would inherently prevent someone from protesting during the anthem

Many, including President Donald Trump, slammed NFL players' peaceful demonstrations as being disrespectful to the military. Vice president Mike Pence walked out of a 49ers-Indianapolis Colts game in October of 2017 after Kaepernick's former teammates kneeled in protest.

On Monday, in response to looting and rioting amid the demonstrations, Trump claimed to be 'an ally of all peaceful protesters' while Pence has echoed similar statements on social media.

Kaepernick recently offered to pay the legal fees for any of the 'freedom fighters' arrested while protesting the death of George Floyd in Minnesota.

'In fighting for liberation there's always retaliation,' Kaepernick wrote on Twitter. 'We must protect our Freedom Fighters. We started a legal defense initiative to give legal representation to Freedom Fighters in Minneapolis paid for by @yourrightscamp.'

Floyd, who was being arrested for alleged forgery, is ultimately seen passing out. He was later declared dead at a local hospital.

Chauvin was arrested Friday and charged with manslaughter and third-degree murder after days of clashes between police and protestors in the Twin Cities. Thus far, one precinct being torched, more than 170 local business have been looted or damaged, and an unknown number of protestors have been arrested.