Cops are hanging up their handcuffs in huge numbers.

The flurry of Finest farewells began after the police-involved killing ofGeorge Floydon May 25, with 272 uniformed cops putting in retirement papers from then through June 24, the NYPD says.

That’s a 49 percent spike from the 183 officers who filed during the same period last year, according to the department.

An NYPD source suggested the recent departures could signal a coming crisis for the 36,000-member department, which also faces a $1 billion budget reduction amid the “defund the police” furor.

“We are worried about a surge in attrition reducing our headcount beyond what we can sustain without new recruits, and are afraid the City Council has not taken the surge into account,” he said.

Police Benevolent Association president Patrick Lynch said cops are “at their breaking point, whether they have 20 years on the job or only two. We are all asking the same question: ‘How can we keep doing our job in this environment?’ And that is exactly what the anti-cop crowd wants. If we have no cops because no one wants to be a cop, they will have achieved their ultimate goal.”

Ed Mullins, president of the Sergeants Benevolent Association, said an “exodus” from the NYPD has begun. He said nearly 80 of his members have recently filed for retirement, and that morale is “at the lowest levels I’ve seen in 38 years.”

The fiery union leader added, “People have had enough and no longer feel it’s worth risking their personal well-being for a thankless position.”

“There is no leadership, no direction, no training for new policies,” he said. “Department brass is paralyzed (and) too afraid to uphold their sworn oath in fear of losing their jobs. Sadly, the people of this city will soon experience what New York City was like in the 1980s.”

Outrage over Floyd’s death sparked nationwide protests, and some NYPD officers see themselves as collateral damage.

“It’s an all-out war on cops and we have no support,” said one veteran Brooklyn cop, who is retiring next month. “I wanted to wait for my 30th anniversary in October, but the handwriting is on the wall.”

Many men and women in blue are fed up, feeling targeted and frustrated that they areexpected to fight crime with fewer tools than ever, while getting no backing from politicians, injured in protests, and constantly scrutinized, according to agitated officers and angry police unions.

The weary rank and file also wonder if one bad decision on the job could get them arrested and charged with a crime. 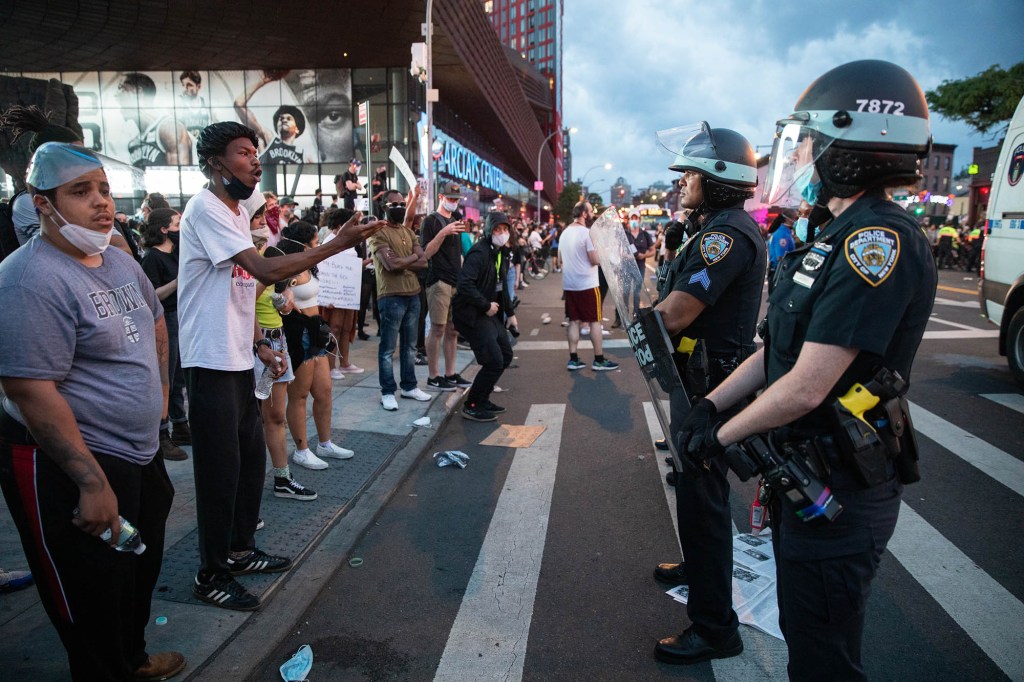 Protesters and NYPD stand off at a street corner in Brooklyn.

“If you have your time in and have an opportunity to do something else, get out while you can,” advised Joseph Giacalone, a retired NYPD sergeant and adjunct professor at the John Jay College of Criminal Justice in Manhattan.

Giacalone said he’d received three emails in “the past week or so” from students asking for advice about changing their career choice. Giacalone said he has not gotten “these kinds” of emails since the Michael Brown killing in Ferguson, Missouri, in August 2014.

He said he “never discourages anyone” about the job, he just “lays out the pros and cons” and also reminds students there are federal law enforcement jobs.

On Thursday, The Post exclusively reported that Bronx NYPD precinct commanderRichard Brea is quittingto protest the department’s handling of police reform and anti-brutality protests. The Deputy Inspector, who led the Bronx’s 46th Precinct, will retire after nearly three decades on the force.

NYPD Sgt. Joseph Imperatrice, founder of Blue Lives Matter, which formed after NYPD officers Wenjian Liu and Rafael Ramoswere assassinated in 2014, claims close to a dozen cops per day are putting in their papers. Imperatrice believes the number is “noticeably higher” than usual and due to the “anti-police and anti-criminal accountability” climate.

Imperatrice contends the number of cops leaving the job since the end of March is “approaching the 700 to 1,000 range between COVID and the anti-police narrative.”

“I feel sorry for the cops who just began their career and have 20 years to go,” Imperatrice said. “Morale across the nation for anybody who puts on that uniform is at an all-time low … Officers are showing up to work putting on their uniform and within a few days thereafter being put into handcuffs.”

He said one “fed-up” Manhattan detective, a 22-year-veteran with a wife and kids, is just waiting to hear back about a new job and then he’s putting in his papers and moving to Arizona. He believes the city is “going down the tubes quick and it’s not going to turn around anytime soon.”

Imperatrice said the heartbroken mom of an anti-crime unit cop killed in the line of duty recently contacted him, “beside herself” because the NYPD disbanded the unit and thus “disbanded the legacy of her son.”

“The politicians are spitting in the faces of families of cops killed in the line of duty and now they’re handing over the keys to the city to these criminals. This is insane,” Imperatrice fumed.

“Of course, if a police officer is acting criminal or abusing their authority, they should be held accountable. But the majority of incidents we are seeing do not warrant officers losing their job and being locked up.”

“People have lost their collective minds.”