The gun Patricia McCloskey waved at protesters was inoperable when it arrived at the St. Louis police crime lab, but a member of Circuit Attorney Kim Gardner's staff ordered crime lab experts to disassemble and reassemble it and wrote that it was “readily capable of lethal use” in charging documents filed Monday, 5 On Your Side has learned.

In Missouri, police and prosecutors must prove that a weapon is “readily” capable of lethal use when it is used in the type of crime with which the McCloskeys have been charged.

Assistant Circuit Attorney Chris Hinckley ordered crime lab staff members to field strip the handgun and found it had been assembled incorrectly. Specifically, the firing pin spring was put in front of the firing pin, which was backward, and made the gun incapable of firing, according to documents obtained by 5 On Your Side.

Firearms experts then put the gun back together in the correct order and test-fired it, finding that it worked, according to the documents. 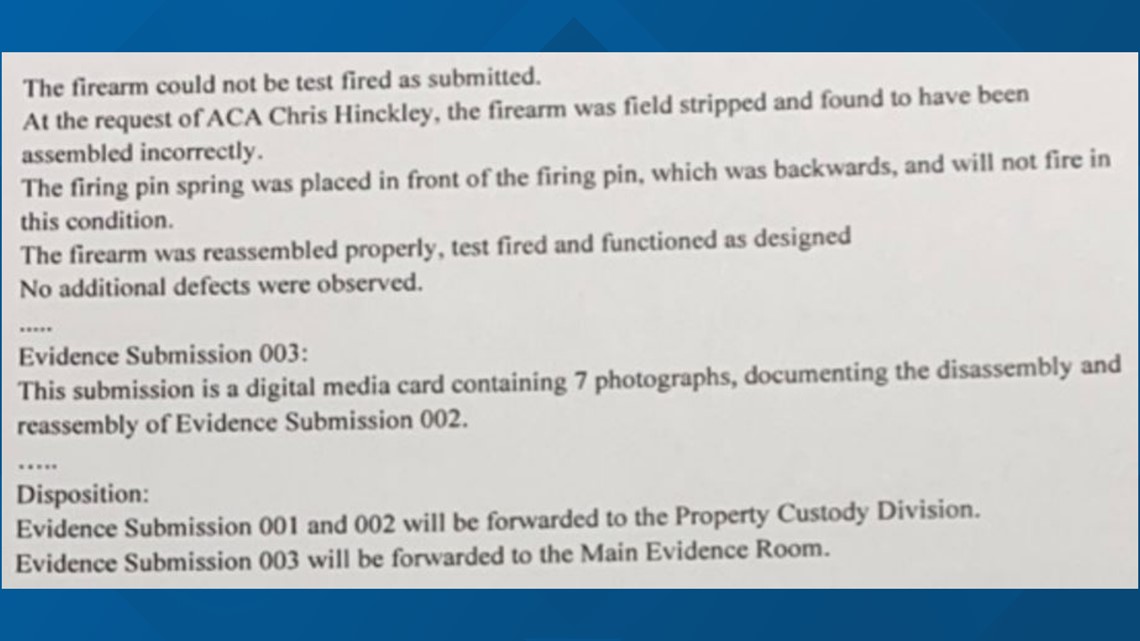 Excerpt of document obtained by 5 On Your Side showing Assistant Circuit Attorney Chris Hinckley's orders to crime lab experts.

Crime lab workers photographed the disassembly and reassembly of the gun, according to the documents.

Patricia McCloskey and her husband, Mark McCloskey, have said the handgun Patricia McCloskey waved at protesters was inoperable because they had used it as a prop during a lawsuit they once filed against a gun manufacturer. In order to bring it into a courtroom, they made it inoperable.

Their attorney, Joel Schwartz, confirmed to 5 On Your Side that the McCloskeys intentionally misplaced the firing pin on the gun and that it was in that condition when Patricia McCloskey waved it at protesters and turned it into their former attorney Al Watkins.

“It’s disheartening to learn that a law enforcement agency altered evidence in order to prosecute an innocent member of the community,” Schwartz said.

A spokeswoman for Gardner wrote: "We can't comment on a pending case."

There is no reference to the operating condition of the gun in the probable cause statement police wrote on the case. The only reference to it is contained in the charging document with Hinckley’s name on it.

The McCloskeys have become somewhat of a household name ever since photos of them pointing guns at protesters went viral June 28. The protesters were marching past their house along a private, gated street on their way to Mayor Lyda Krewson’s house after Krewson read the names and addresses of those who wrote letters to her asking her to shutter the city’s jail, known as the Workhouse.

Most legal experts say Missouri law is not on Gardner’s side in this case because it allows people to defend their property with lethal force under what’s known as the Castle Doctrine.

Her decision to charge them has now garnered commentary from local and national Republicans including President Donald Trump, whose press secretary called it "abuse of power.”

Missouri Governor Mike Parson has said he will pardon the couple if they are convicted.