Housing and Urban Development Secretary Ben Carson defended a plan to raise subsidized rents at a political conference Monday in Memphis, where an estimated 10,600 households could see their minimum rents rocket by 25 percent.

Raising minimum subsidized rents from $50 to $150 will give people "more skin in the game," said Carson.

Carson also talked about how he had grown up in poverty and, at one point, homeless in Detroit before his mother replaced television with books, leading him to become a neurosurgeon. Carson denied that the plan was a "war on the poor."

"What we're really doing is declaring war on poor management and taking care of what should be done," Carson said without mentioning the potential impact on Memphians.

Carson, who delivered the keynote at the American Conservative Union Foundation's Conservative Political Action Conference 365 in the FedExForum lobby, said his goal was to incentivize public housing recipients to reach their God-given potential. More than 100 people attended the event, filling up about half of the seats.

Citing critics who said the administration wants to raise rents on disabled and the elderly, Carson replied with "What a bunch of crap" and pointed out that the plan was initially proposed — but not implemented — by the previous administration.

Carson also touted the Tax Cuts and Jobs Act of 2017, now in its seventh month, calling its tax cuts "historic" and saying the Trump administration was "blazing new trails" — they're the largest tax overhaul since 1986, according to the Brookings Institute.

He also praised the act's creation of Opportunity Zones, which are low-income areas where investments can lead to tax breaks. Shelby County has 32 of the zones, he said.

"We are definitely disturbing the swamp creatures — and they are not happy, believe me," he said.

Although Trump has described the results of the act an "economic miracle," the act is projected to add $1 trillion to the national debt while the average income increases by $17 a month.

Housing values haven't taken a dive, as some economists predicted, but the Brookings Institute still predicts the bad will outweigh the good in the long run.

After his speech, he was joined on the stage by U.S. Rep. Diane Black, who is among the leading contenders for the Republican nomination in the 2018 Tennessee governor's race.

Also vying for the Republican nomination on Aug. 2 are Randy Boyd, Bill Lee and Beth Harwell. Karl Dean and Craig Fitzhugh face each other in the Democratic primary. 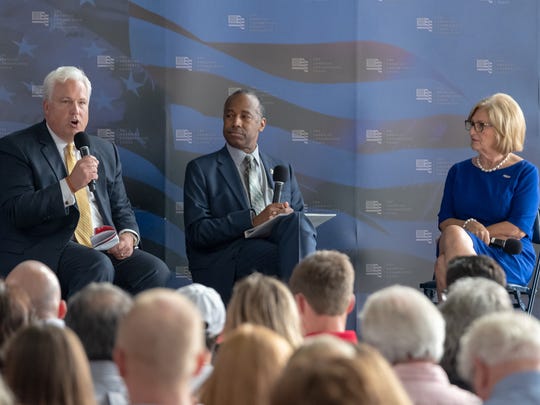 Black, who received the American Conservative Union Foundation's endorsement earlier in the day, told her story about growing up poor. She praised Carson for trying to push people in government programs to get jobs, which she said gave people "dignity."

"It's not only about the money," she said. "It's about the dignity."

Asked what Tennessee needed from Congress, Black replied "spending control" to applause from the more than 100 people present, who filled about half of the available seats.

Without mentioning the affect the Tax Cuts and Jobs Act could have on the debt, Carson said that under current spending trends the U.S. won't have the money for anything other than debt service by 2048.

He quoted one of the nation's founding fathers, Thomas Jefferson, that it was "immoral" to steal from future generations.

"I don't know what he would say about us," Carson said of Jefferson.