A combination of factors will see federal agencies trying to spend as much as 40 percent of their budgets in the final two months of the fiscal year.

A government spending spree of potentially historic proportions will play out over the final seven weeks of fiscal 2018, as federal agencies look to spend $140 billion more than they thought they’d get before Congress signed the omnibus spending bill.

Without a budget agreement in place, agencies spent cautiously through the first two quarters of fiscal 2018 before the omnibus—signed six months late in March—obligated an additional $80 billion for defense and $63 billion for civilian agencies.

Federal agencies, now flush with cash, must obligate that money before the fiscal year ends on Sept. 30 or lose it to the Treasury Department. Analysts believe the federal market will see a monumental effort among procurement officials to spend as much on contracts as possible.

“If agencies are going to spend the extra money in fiscal 2018, it’s going to have to be at a much higher percentage in the fourth quarter than it has been historically,” David Berteau, president of the Professional Services Council, told Nextgov. 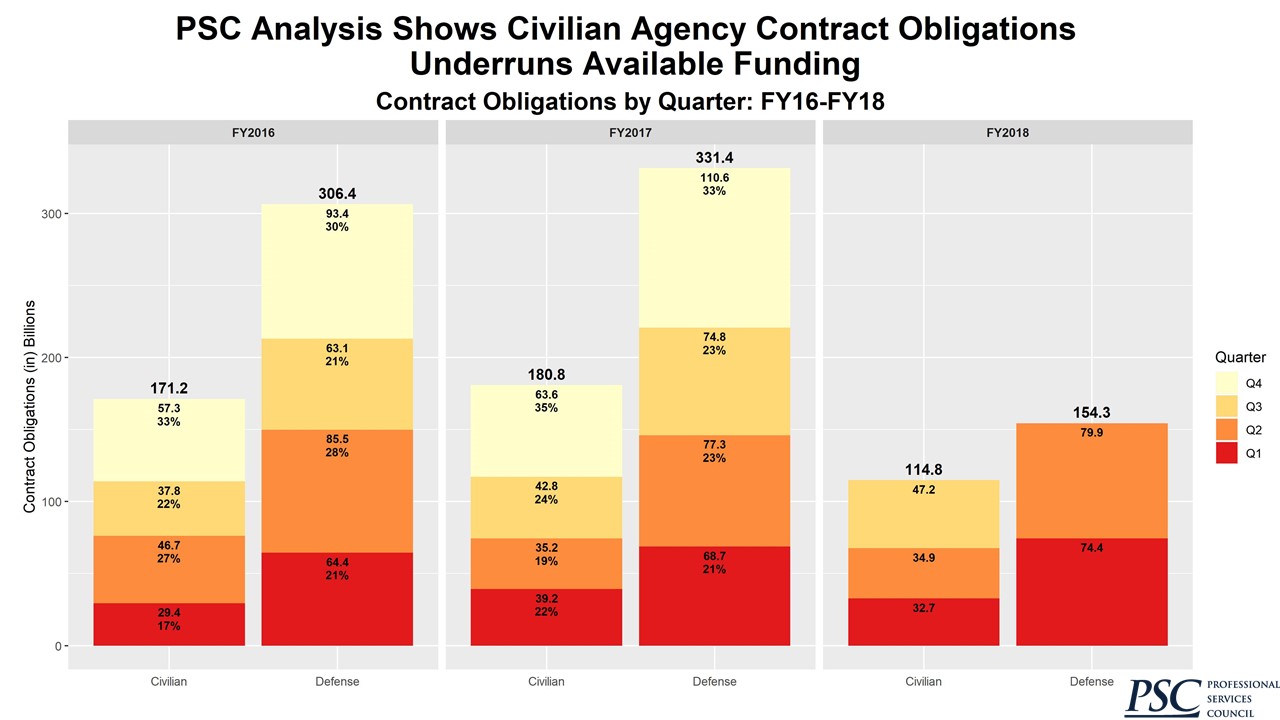 So far in fiscal 2018, defense and civilian agencies have spent a little over $300 billion in contract awards according to data from the Federal Data Procurement System. After a slow start in the first six months of the year, contract spending ticked up in the third quarter, yet only two of the 10 largest federal agencies have managed to spend 70 percent of their projected discretionary budgets by the beginning of the fourth quarter.

That’s problematic because over the past five years, agencies have averaged about 32 percent of their spending in the fourth quarter, meaning the vast majority of agencies are way behind.

According to contracting experts at The Pulse, the Defense Department has only obligated $177 billion in contracts of a projected $574 billion in discretionary spending for fiscal 2018. Defense spending tends to lag—and some of its money is multi-year, which means it needn’t be spent right away—but other agencies are also in tough spots.

“In short, this means there is a lot of money, more than normal, still on the table for Q4 FY18,” The Pulse report states.

It also guarantees an even more chaotic spending frenzy to close the fiscal year than normal. The Treasury Department’s Fiscal Service Data Lab, which analyzes government spending data, found that on average 6 to 8 percent of all contract spending is obligated in the final week of the fiscal year.

“Fiscal year in and out, we ask contracting offices to pull off miracles on a shoestring budget. This Q4 might just be the tipping point. There just simply isn't enough time in the day or resources in place,” The Pulse analysts said.

Where will they money go?

Agencies spend money on an assortment of things, like payroll for civilians and uniformed personnel and grants, but existing contracts, Berteau said, offer procurement officials the most flexibility.

Because new procurements take months or longer to issue, Berteau said contract vehicles with manageable ceiling values and broad scopes “become essential” because money can quickly be obligated to them.

“I would think the government is looking for those vehicles,” Berteau said. “And contractors themselves would be trying to help customers find them and use them.”

Crunching government data from the past five fiscal years, The Pulse analysts determined agencies spent the most on professional, administrative and management support services, averaging around $70 billion in previous fourth quarters. Professional, scientific and technical services—another popular expense—received close to $50 billion each fourth quarter dating back to fiscal 2014. Historically, large contractors dominate the fourth quarter, capturing more than half of the government’s contract spend during that period.

Given the challenge, Berteau expressed some doubts that contracting officials will be able to meet the unusually heavy spending demand fiscal 2018 presents. The civilian workforce has been shrinking since January 2017 and while there is no specific data on acquisition officials, Berteau said it’s unlikely their ranks grew as overall civilian employment dropped by 25,000.

Berteau said he’s already hearing stories of contracting officers telling companies their plates are full and are unable to get another contract out.

“Right now, there are fewer people to do more work,” Berteau said. “Under normal circumstances, I would say they’d be doing everything they can to obligate the funds, but I do believe that the volume of work necessary to do it and the capacity of the workforce to execute that volume raises big questions about how close they can come.”