Americans looked back on 9/11 Tuesday with tears and somber tributes as President Donald Trump hailed “the moment when America fought back” on one of the hijacked planes used as weapons in the deadliest terror attack on U.S. soil.

Victims’ relatives said prayers for their country, pleaded for national unity and pressed officials not to use the 2001 terror attacks as a political tool in a polarized nation.

Seventeen years after losing her husband, Margie Miller came from her suburban home to join thousands of relatives, survivors, rescuers and others on a misty morning at the memorial plaza where the World Trade Center’s twin towers once stood.

“To me, he is here. This is my holy place,” she said before the hours-long reading of the names of her husband, Joel Miller, and the nearly 3,000 others killed when hijacked jets slammed into the towers, the Pentagon and a field near Shanksville, Pennsylvania on Sept. 11, 2001.

The president and first lady Melania Trump joined an observance at the Sept. 11 memorial near Shanksville, where one of the jetliners crashed after 40 passengers and crew members realized what was happening and several passengers tried to storm the cockpit.

New York is commemorating 9/11 with somber tributes at the site of the World Trade Center attacks. Each year at ground zero, victims’ relatives infuse the name reading ceremony with personal messages of remembrance, inspiration and political concern. (Sept. 11)

Calling it “the moment when America fought back,” Trump said the fallen “took control of their destiny and changed the course of history.”

They “joined the immortal ranks of American heroes,” said Trump.

At the Pentagon, Vice President Mike Pence recalled the heroism of service members and civilians who repeatedly went back into the Pentagon to rescue survivors.

The terrorists “hoped to break our spirit, and they failed,” he said.

At the United Nations, Security Council members stood for a moment of silence, led by U.S. Ambassador Nikki Haley.

The 9/11 commemorations are by now familiar rituals, centered on reading the names of the dead. But each year at ground zero, victims’ relatives infuse the ceremony with personal messages of remembrance, inspiration and concern.

For Nicholas Haros Jr., that concern is officials who make comparisons to 9/11 or invoke it for political purposes.

“Stop. Stop,” implored Haros, who lost his 76-year-old mother, Frances. “Please stop using the bones and ashes of our loved ones as props in your political theater. Their lives, sacrifices and deaths are worth so much more. Let’s not trivialize them.”

This year’s anniversary comes as a heated midterm election cycle kicks into high gear. But there have long been some efforts to separate the solemn anniversary from political campaigns. The group 9/11 Day, which promotes volunteering on the anniversary, asks candidates not to campaign or run political ads for the day. Organizers of the ground zero ceremony allow politicians to attend, but they’ve been barred since 2011 from reading names or delivering remarks.

If not political speeches, there were politically tinged appeals from some victims’ relatives amid the reading.

“May we support our president to lead our country,” said Joanne Barbara, who lost her husband, Fire Department Assistant Chief Gerard Barbara.

“My hope is that discrimination, hatred and bigotry will cease and that we all will come together and love,” said Debra Epps, a sister of victim Christopher Epps. Another sister, Chaundera, had an answer for anyone who wonders why families still come to such ceremonies after 17 years.

Other relatives laid bare the toll their losses had taken on their families. Thomas Langer said his brother, Timmy, “drank himself to death” after losing his wife, Vanessa, and their unborn child on Sept. 11.

“I witnessed my brother endure the pain that no one human being was ever meant to bear,” Thomas Langer said.

Sept. 11 still shapes American policy, politics and everyday experiences in places from airports to office buildings, even if it’s less of a constant presence in the public consciousness after 17 years. 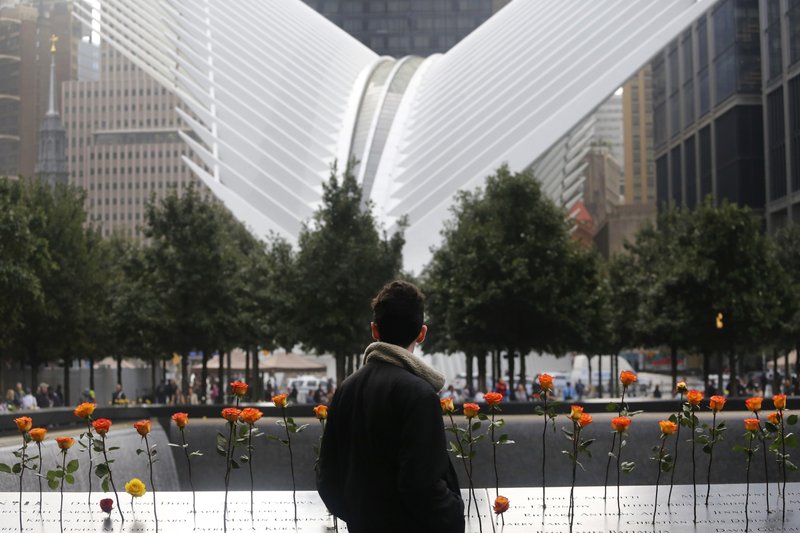 A man looks at the North Pool at the World Trade Center during a ceremony marking the 17th anniversary of the September 11 terrorist attacks. (AP Photo/Mark Lennihan)

A stark reminder came not long after last year’s anniversary: A truck mowed down people, killing eight, on a bike path within a few blocks of the World Trade Center on Halloween.

In December, a would-be suicide bomber set off a pipe bomb in a subway passageway near Times Square, authorities said. They said suspects in both attacks were inspired by the Islamic State extremist group.

“I get very worried for the state of society. ... It’s part of what it means to be human in the 21st century, a fear for public safety,” said Perez, 23, who lost his uncle, Calixto Anaya Jr.

Memorials to 9/11 continue to grow at Shanksville, where a newly dedicated Tower of Voices will eventually include a wind chime for each of the 40 people killed there, and ground zero, where work is to begin soon on a pathway honoring rescue and recovery workers. 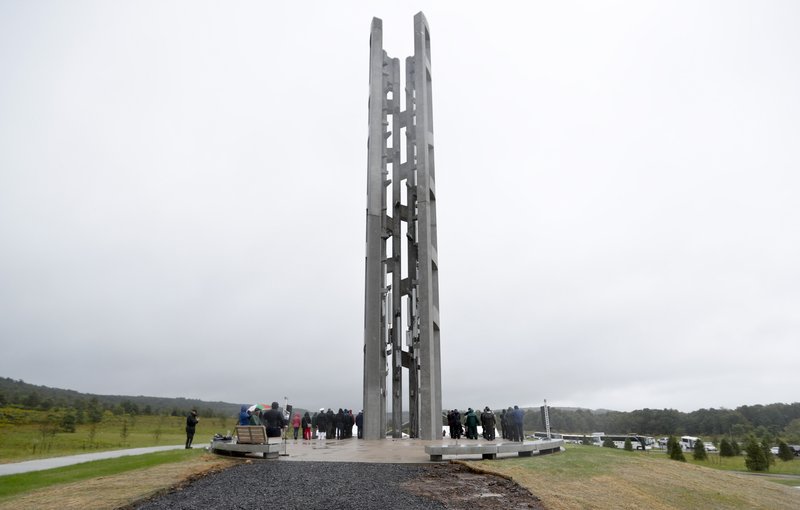 It will serve as a way to recognize those who became sick or died from exposure to toxins released when the Trade Center’s twin towers collapsed. Researchers have documented elevated rates of respiratory ailments, post-traumatic stress disorder and other illnesses among people who spent time in the rubble.

About 38,500 people have applied to a compensation fund, and over $3.9 billion in claims have been approved.

Meanwhile, a subway station destroyed on 9/11 finally reopened Saturday. In June, doors opened at the 80-story 3 World Trade Center, one of several rebuilt office towers that have been constructed or planned at the site.

Victims’ families, too, have evolved and grown.

“Even though I never met you,” Isabella Del Corral said of her slain grandfather, Joseph Piskadlo, “I’ll never forget you.”