A federal judge on Thursday sentenced longtime Donald Trump lawyer Michael Cohen to three years in jail for a series of crimes to which he pleaded guilty, saying his cooperation with the Russia probe 'does not wipe the slate clean.'

As an attorney, Cohen 'should have known better,' said the judge, following dramatic courtroom arguments that featured repeated references to President Trump – including his attacks on Cohen as 'weak' and a 'rat' and Cohen's own explanation of what it took to provide information against him.

Cohen shed tears in the courtroom as he sought leniency and reflected on decisions in his life that he now regrets – including his own 'blind loyalty' to Trump, a man who helped make him rich and later 'directed' him to engage in one of the crimes he pleaded guilty to committing.

Cohen won't have to report to jail until March 6, and could still get a further discount to his time if he cooperates.

An anguished Cohen pleaded with a Judge William Pauley to be able to stay out of jail, and expressed regret for trying to cover up Trump's 'dirty deeds.'

The former right-hand man to the man who became president also will have to hand over to the government nearly $2 million in combined restitution and fines, having dodged taxes while assembling real estate and taxi business holdings as a top hand to the Trump Organization.

He must report to the federal prison in Otisville, New York, which has a medium security prison as well as a minimum security satellite camp and which caters to many Jewish inmates from New York City and those with Kosher needs.

The tearful longtime Donald Trump lawyer took on Trump – who he once said he would 'take a bullet for' – in emotional terms for having called him 'weak' in an attack last month. 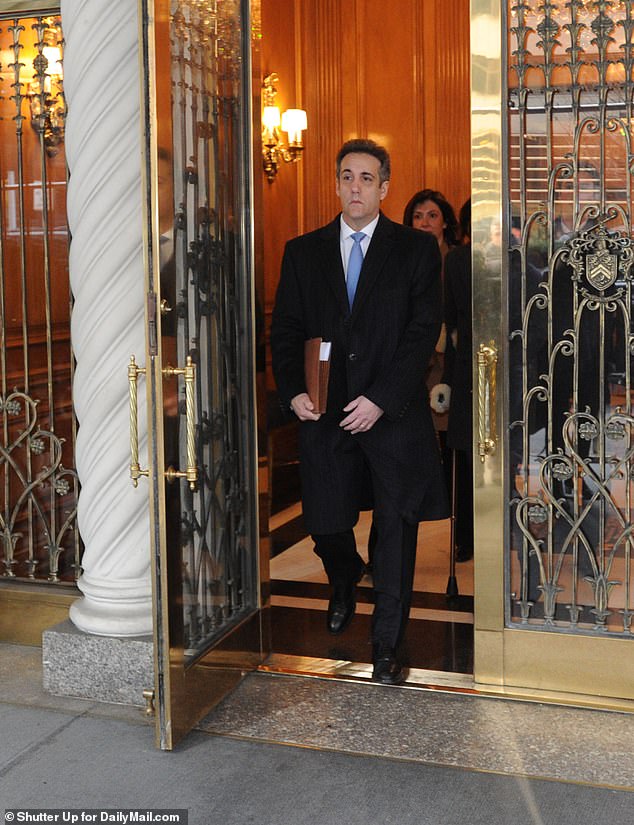 'Recently the president tweeted a statement calling me weak and it was correct, but for a much different reason than he was implying,' Cohen told a federal judge in open court. 'It was because time and time again I felt it was my duty to cover up his dirty deeds,' Cohen said.

He blasted President Trump for 'calling me a rat,' and criticized his longtime employer for trying to sway a proceeding that could in fact 'implicate' him.

'I will continue to cooperate' with investigators, Cohen pledged.

But after the judge handed down the sentence, Cohen walked past reporters outside the federal courthouse and entered a vehicle without comment.

Cohen headed to federal court in New York Wednesday to face sentencing after prosecutors in New York recommended he get 'substantial' jail time – as his attorney lauded his willingness to testify against the president. 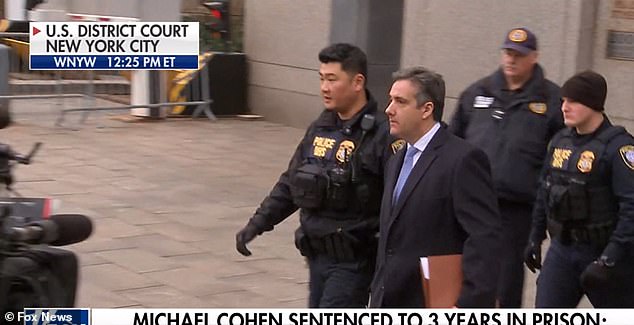 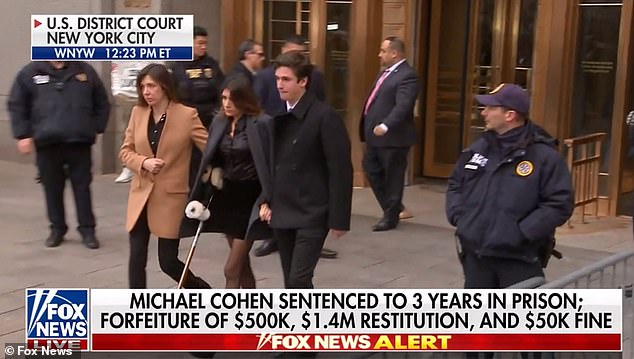 Michael Avenatti says 'Donald Trump is next' after Cohen sentencing 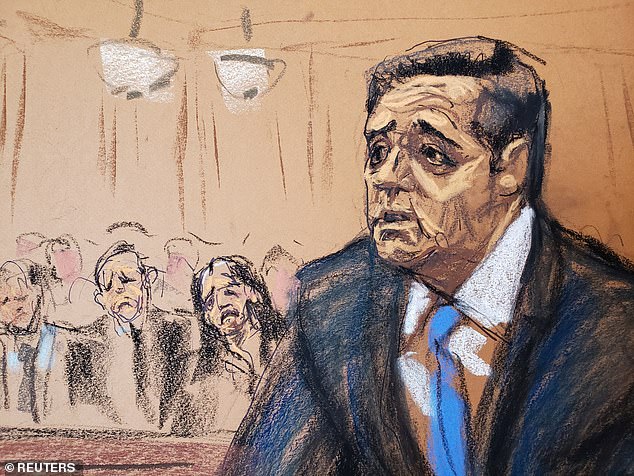 A tearful Cohen pleaded for leniencey 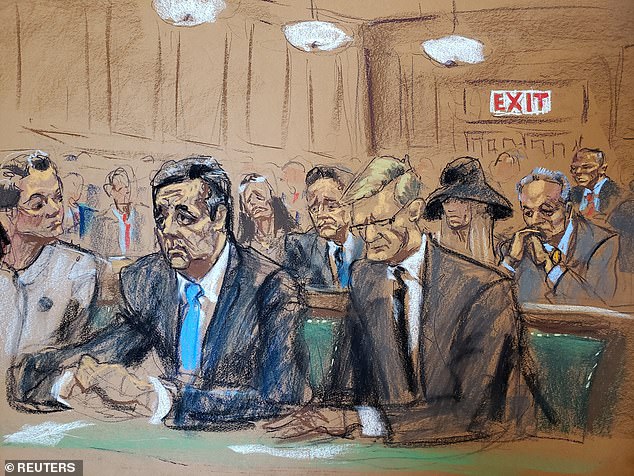 'Today is one of the most meaningful days of my life. I have been living in personal and mental incarceration ever since the day that I accepted the offer to work for a real estate mogul whose business acumen that I deeply admired.'

Said he was committed to 'ensuring that history will not remember me as the villain of his story.'

'Recently the president tweeted a statement calling me weak and it was correct, but for a much different reason than he was implying. It was because time and time again I felt it was my duty to cover up his dirty deeds.'

'I'm truly sorry and I promise I will be better.'

'I do not need a cooperation agreement in place to do the right thing.'

'I take full responsibility for each act that I pleaded guilty to.'

'I will continue to cooperate.'

In a courtroom plea for leniency, Cohen's lawyer, Guy Petrillo, described his client as a brave witness who came forward with evidence 'against the most powerful person in our country' – and tried to draw a contrast with former Trump campaign chair Paul Manafort, who prosecutors say committed 'lies' despite agreeing to cooperate.

He did so without being able to 'anticipate the full measure of attack that would be made against him,' his lawyer argued.

Petrillo called it a 'profound contrast' with others who decided to allegedly 'double deal,' CNN reported.

'He knew that the president might shut down the investigation,' Petrillo said, Courthouse News reported.

His lawyers also pushed back at SDNY, which in its sentencing memo pointed out that Cohen never reached a cooperation agreement.

Michael Cohen arrives home after judge sentences him to prison

SCHMEAR CAMPAIGN: Cohen will do his time at a federal prison in Otisville, New York, known to have a full time rabbi serving as a chaplain with kosher food offerings that are required by some Jewish inmates

Judge William Pauley sentenced Michael Cohen to serve his three-year sentence is located in Otisville, New York and has both a medium security prison and minimum-security camp – and both are sought after by inmates.

The facility has a full-time Jewish chaplain, and offers kosher meals, Passover seders. It has a large number of inmates who like Cohen are Jewish.

The federal prison located upstate in Orange County will allow for reasonably convenient visits by Cohen's family. Cohen cited brought his wife and children to court with him, and cited them in his courtroom speech describing why he sought quick sentencing and did not take a formal cooperation agreement. 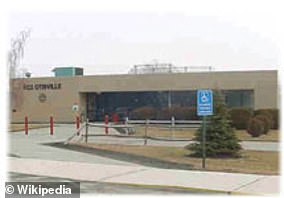 The location will also allow for ease of contact with federal prosecutors in New York. Cohen stated in court that he will continue to cooperate with the government.

The facility is considered a desirable place to do time. 'Otisville is very close to New York City, so it has more access to a Jewish population, to rabbis, and to kosher food,' Rabbi Menachem Katz for the Jewish-outreach Aleph Institute told New York Magazine back in 2008. 'The Bureau of Prisons kind of unofficially designated it to meet the needs of Orthodox Jews,' he said.

It is sought after by white collar criminals including Sam Waksal of ImClone.

According to the Bureau of Prisons, it has 840 inmates, with 722 at the prison and 118 at a nearby camp. It wasn't immediately clear which facility Cohen would go to. The camp has inmates doubled up two to a room.

In addition to kosher cooking facilities, it has Shabbat services and a Passover seders that features all the traditional accompaniments, minus the wine.

The prison store features deli favorites like rib steak, gefilte fish, and kugel, along with chorizo and Salmon, the New York Post reported in 2012.

'He is wary of a long-term cooperation agreement for personal reasons,' saying Cohen was operating based on concerns for his family and wanting to avoid the 'glare of the cameras.'

A person who reaches a cooperation agreement in New York is expected to answer all the government's questions and reveal all about any criminal activity they know about.

Jeannie Rhee, representing Special Counsel Robert Mueller's probe, said Cohen provided 'credible' information about 'any links between a campaign and a foreign government' and 'sought to tell us the truth.'

But Rhee was circumspect, noting there was 'only so much we can say ... given our ongoing investigation.'

But there was a split between prosecutors. Federal prosecutors based in New York inveighed against Cohen trying to engage in 'selective cooperation.'

The charges he pleaded guilty to 'portray a pattern of deception, of brazenness and of greed,' argued Nicolas Roos, arguing for the Southern District of New York.

Cohen advisor Lanny Davis issued a statement saying: 'Michael has owned up to his mistakes and fully cooperated with Special Counsel Mueller in his investigation over possible Trump campaign collusion with Russian meddling in the 2016 election.

'While Mr. Mueller gave Michael significant credit for cooperation on the 'core' issues, it is unfortunate that SDNY prosecutors did not do the same. To me, their judgment showed a lack of appropriate proportionality,' he added.

In a signal that Cohen has more information, Davis said he looked forward to helping Cohen speak publicly about 'all he knows about Mr. Trump.'

Stormy Daniels attorney Michael Avenatti was on hand for sentencing, and spoke before the cameras afterwards.

'He deserves every day of a 36 month sentence that he will serve,' said Avenatti.

Cohen left his Park Avenue apartment in Manhattan, accompanied by his wife Laura, along with his two children, as he went to learn his fate after prosecutors in New York argued he should get a 'substantial' sentence.