Speaker Nancy Pelosi returned to power on Thursday and marked a new chapter in President Donald Trump's tenure in Washington as he faces a Democratic Party on a collusion course with his administration.

Grinning broadly and holding up the speaker's gavel, Pelosi leads a party with power to subpoena Trump officials, investigate him, and block his legislative agenda.

She did not mention Trump by name but she called for civility among the parties as they disagree and ask for the truth to be respected - a subtle dig at a president who is accused of name calling and lying about his record.

'Transparency will be the order of the day,' she added.

She also didn't mention the partial government shutdown that clouded her ascension to power.

Democrats and the White House are at an impasse over funding Trump's $5 billion border wall.

The wall got no mention but she did talk about an issue important to Democrats - protecting the children brought to the U.S. illegally by their parents.

'And we will make America more American by protecting our patriotic, courageous Dreamers!,' she said.

Trump made a surprise appearance in the White House press room on Thursday afternoon in a briefing announced five minutes before it started.

His seven-minute appearance started with his congratulations to Pelosi.

'I just want to start off by congratulating Nancy Pelosi on being elected speaker of the House. It's a very, very great achievement, and hopefully we're going to work together and we're going to get lots of things done, like infrastructure and so much more. I know they want to do that very badly. So do I. So hopefully we're going to have a lot of things that we can get done together, and I think it's actually going to work out. I think it will be a little bit different than a lot of people are thinking. So I congratulate Nancy. Tremendous, tremendous achievement,' he said.

Then he let immigration officers talk about the importance of a border wall. He took no questions. 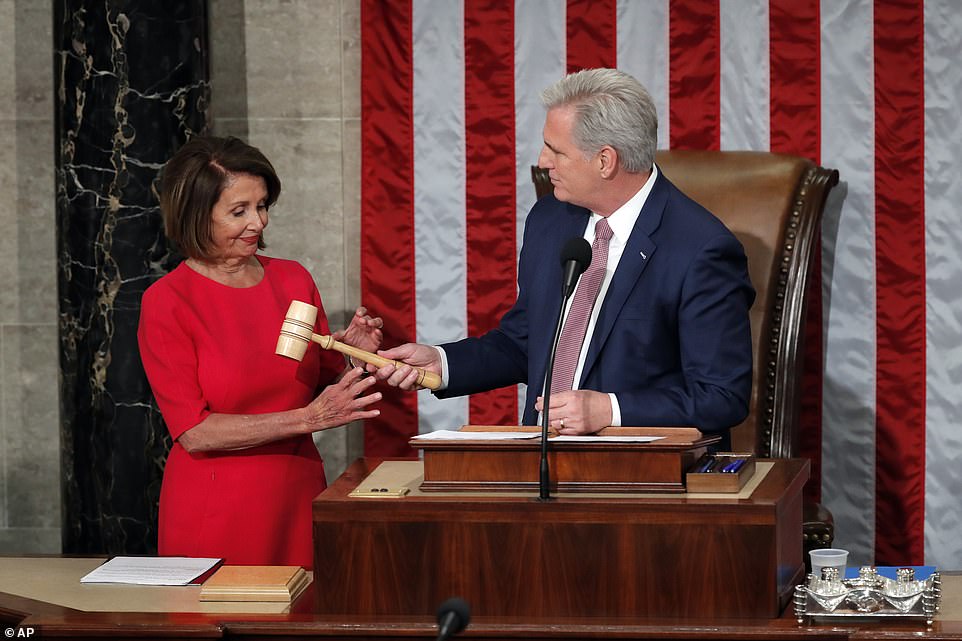 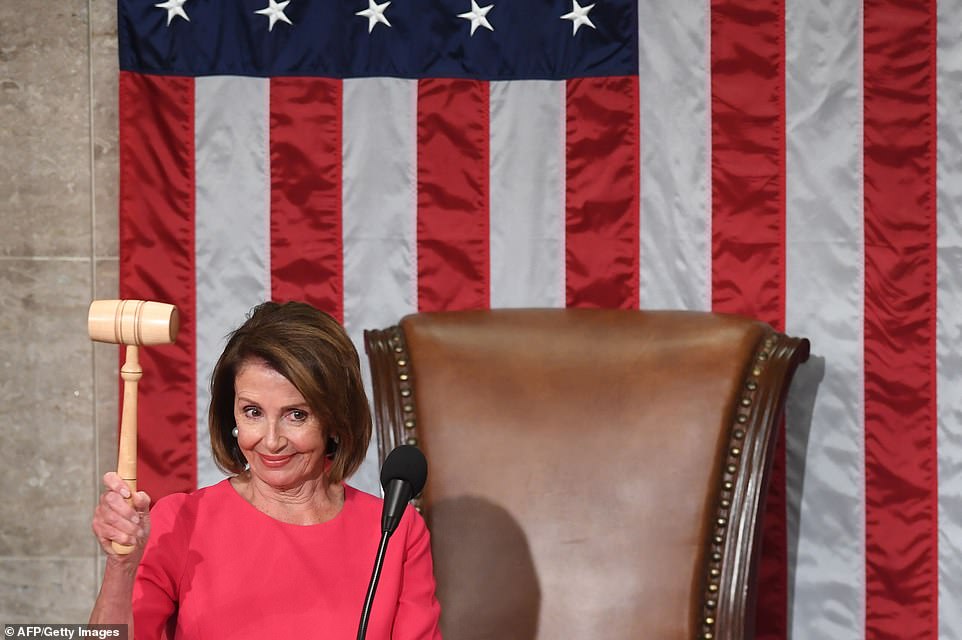 Pelosi holds up the speaker's gavel: the symbol of her return to power 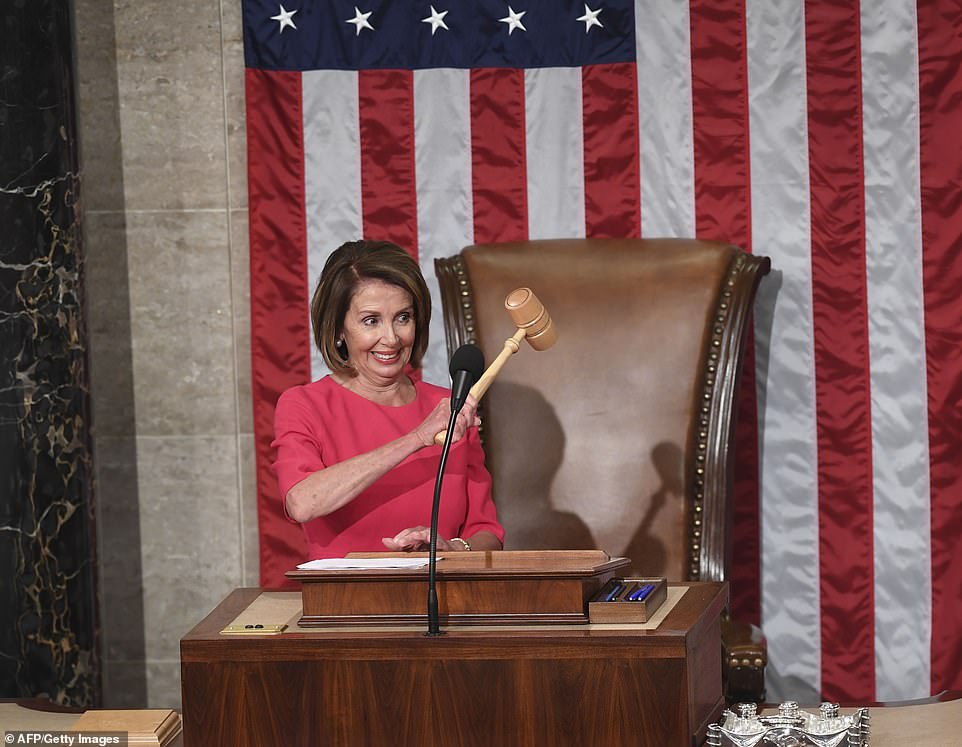 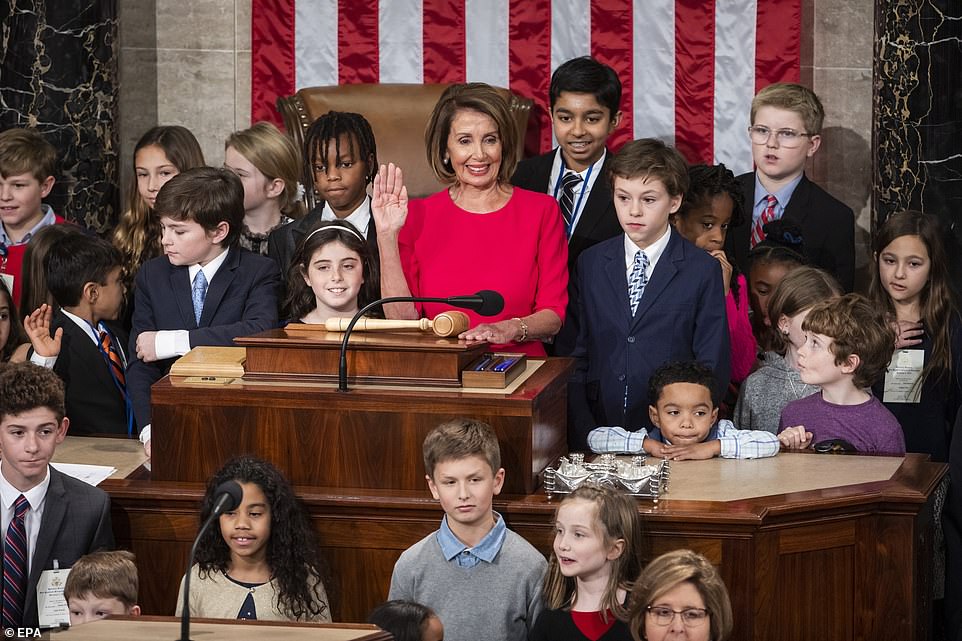 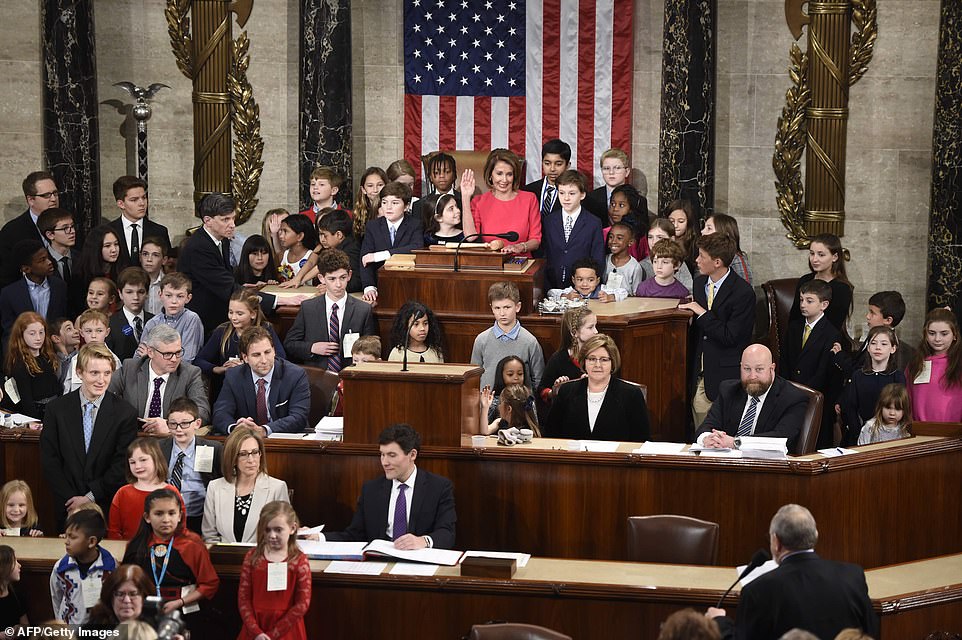 Several children joined Pelosi for her oath of office 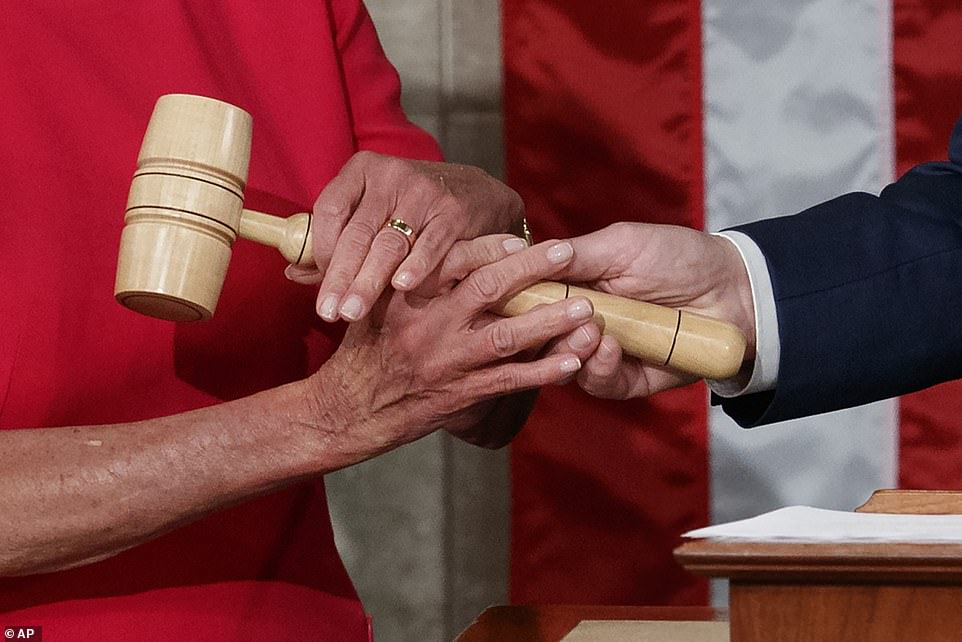 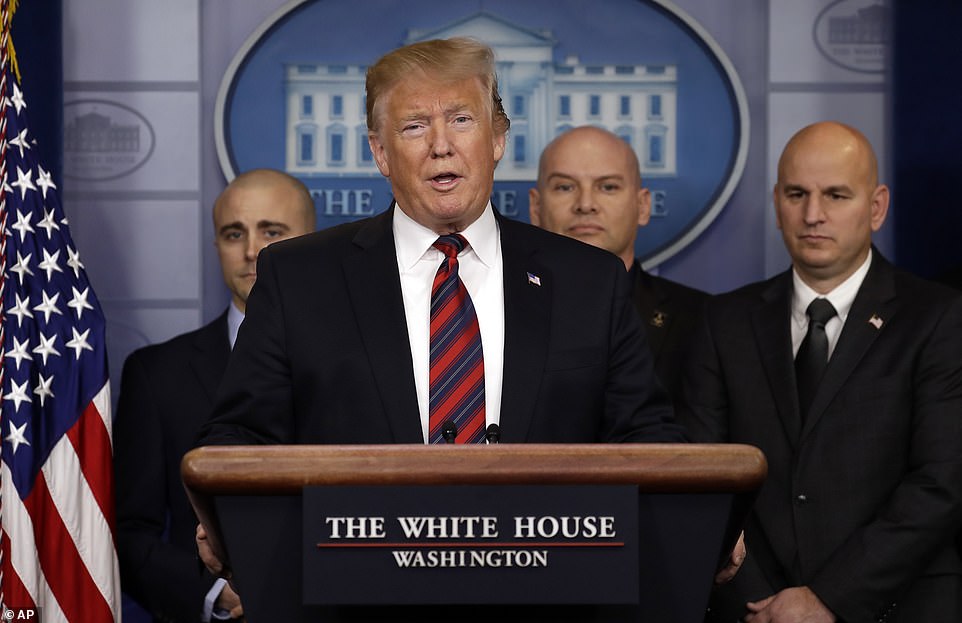 Pelosi invited her grandchildren and the children of any other lawmaker to join her at the dais when she took the oath of office.

About 50 kids ran the podium to join her as Republican Rep. Don Young, the dean of the House, administered the oath of office.

‘I now call the House to order on behalf on all of America’s children,’ Pelosi said after she was sworn in as speaker.

She then offered to let the children return to the parents before she administered the oath of office to the rest of the House.

‘No,’ she laughed when the parents rejected her offer.

She asked the lawmakers to stand and raise their hands. After she read the oath she told them: ‘Congratulations. You are all now members of the 116th Congress.’

Pelosi was officially elected Speaker of the House in a roll that vote that saw the woman who became the first speaker in 2007 ascend to the job again.

'I am particularly proud to be the woman Speaker of the House of this Congress, which marks 100 years of women winning the right to vote, as we serve with more than 100 women in the House of Representatives – the highest number in history,' Pelosi said.

House Republican leader Kevin McCarthy handed her the gavel, marking the end of eight years of GOP power in the House.

'The country knows Nancy Pelosi as an experienced politician with three decades of service in Congress. A fighter for her cause. And a trailblazer,' he said. 'Even when we disagree with one another completely -- it is important to remember that we are bonded together in a common cause. Our love for America.'

After being formally elected, Pelosi strode down the House aisle in triumph to take the gavel from Republicans.

California Democrats serenaded her after her win, singing 'California Here We Come.'

'Having received a majority of the votes passed, Nancy Pelosi is elected speaker of the House,' House clerk Karen Haas announced.

Democrats gave her a standing ovation, cheering and whopping on the House floor. A couple of Pelosi's grandkids ran to hug her. Other lawmakers gave her hugs and kissed her cheek.

Democrats cheered her from the start of the session, which began with her nomination.

'House Democrats are down with NDP,' Democratic Rep. Hakeem Jeffries said of Nancy D'Alesandro Pelosi as he nominated her to the job. 'Nancy Pelosi is just getting started.'

He said of the longtime lawmaker: 'Nancy Pelosi is a woman of faith, a loving wife, a mother of 5, a grandmother of 9, a sophisticated strategist, a legendary legislator, a voice for the voiceless, a defender of the disenfranchised.'

The roll call vote began shortly after 1 p.m. with the Clerk of the House calling out each member in alphabetical order.

Pelosi sat on the edge of her seat at times, smiling broadly as Democrats called out her name. She would swivel her head around the room to watch as the votes racked up in her favor. 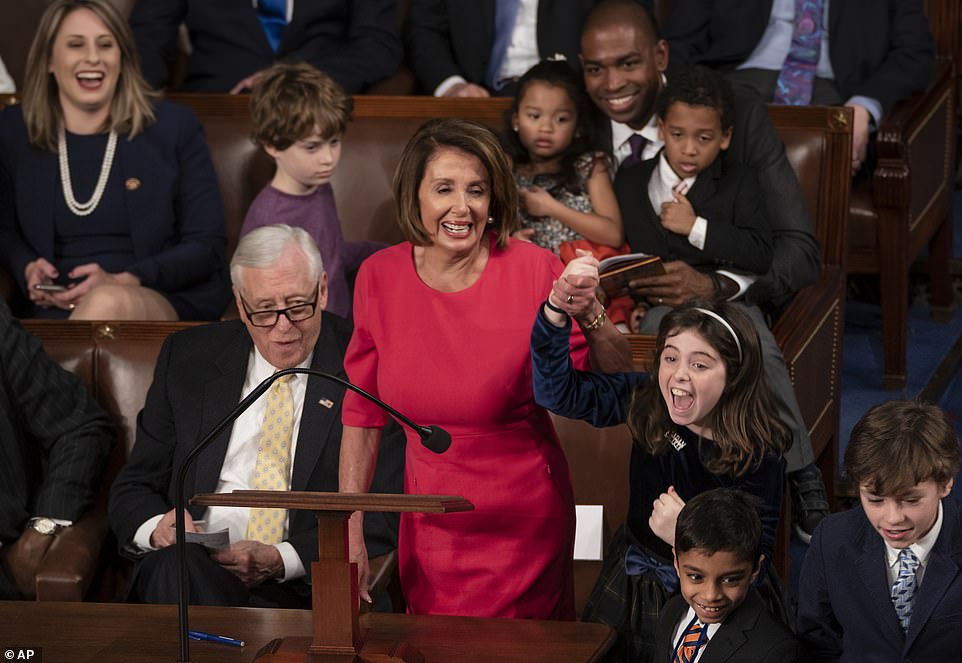 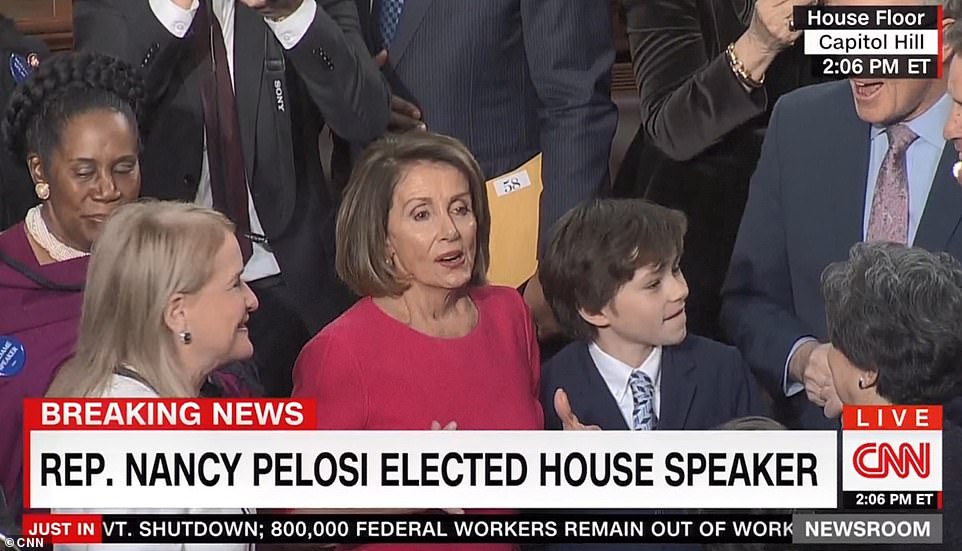 Pelosi with her grandson when she is declared speaker 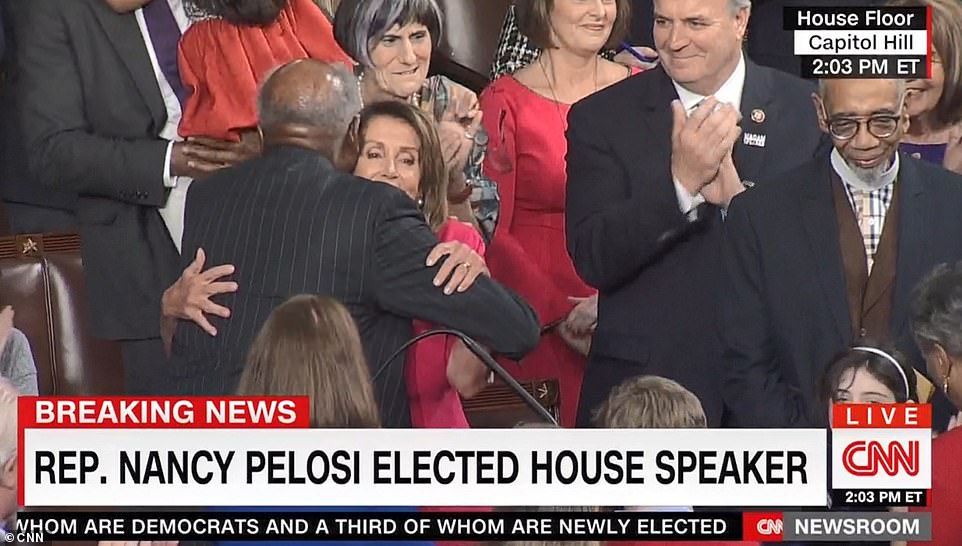 Democrats rushed to give her congratulatory hugs 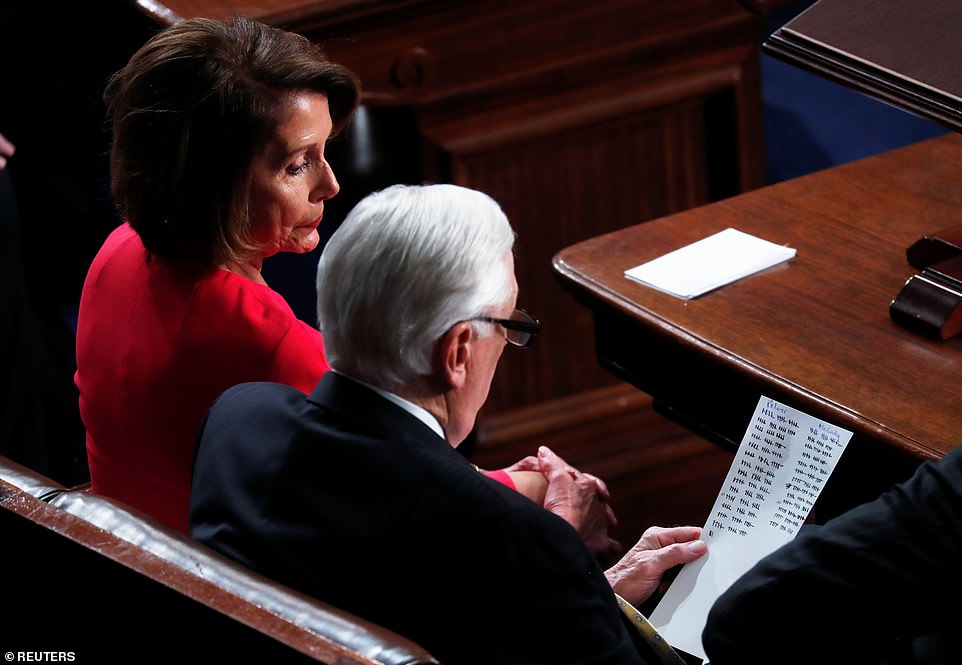 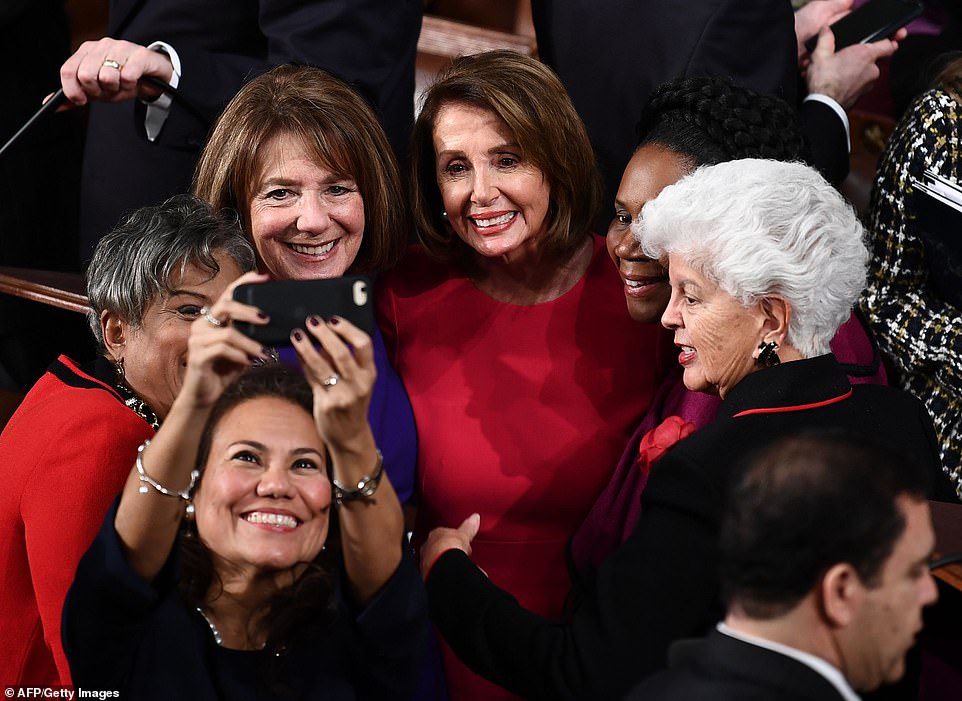 Pelosi poses for a selfie with fellow female lawmakers 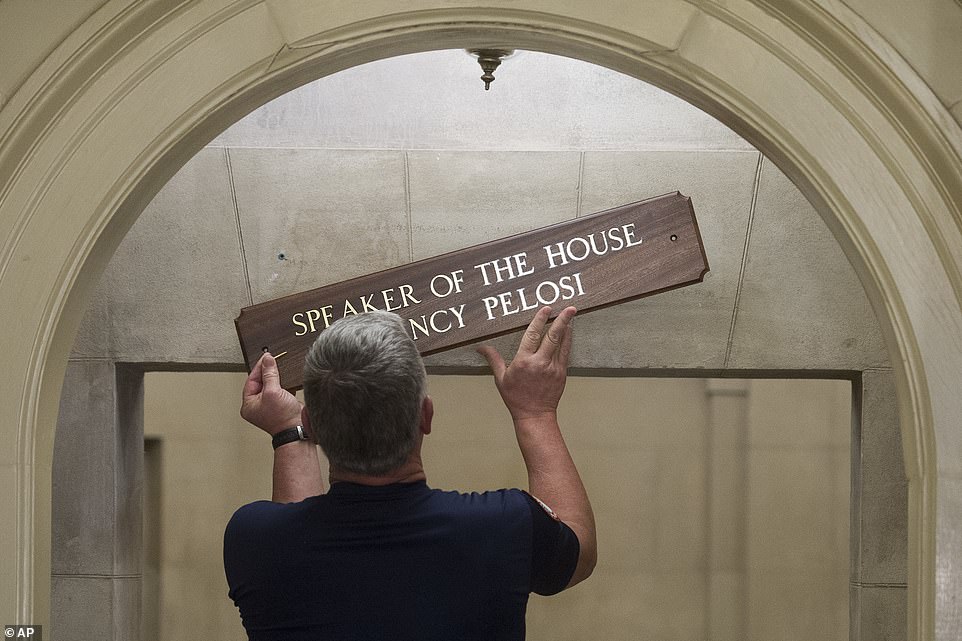 Pelosi's name is placed over the speaker's office 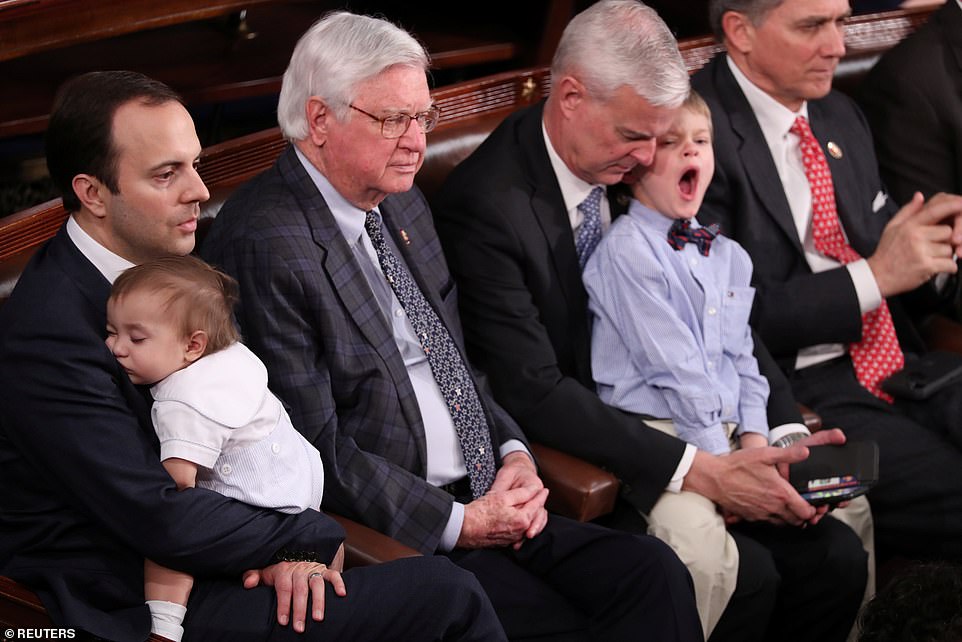 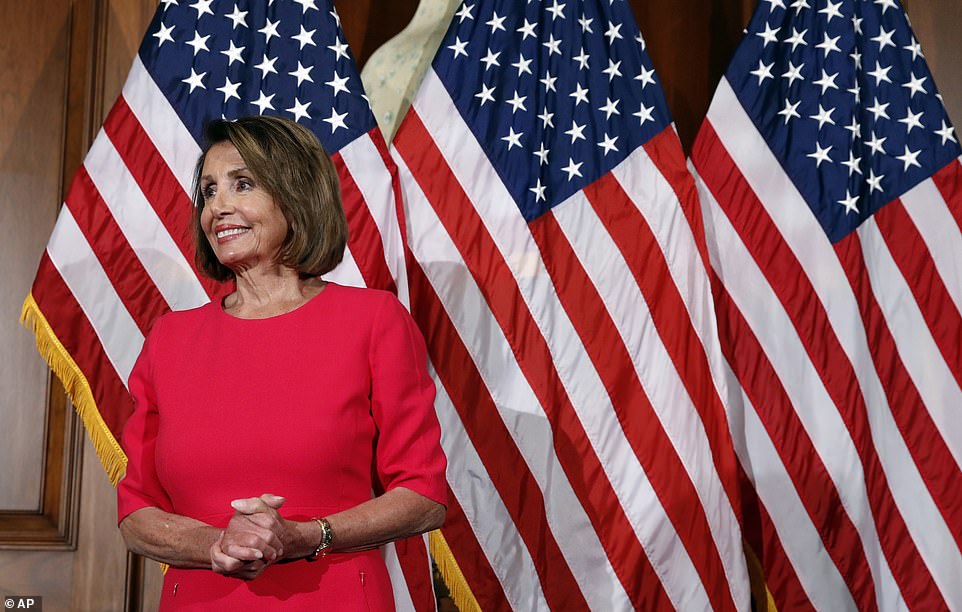 Pelosi celebrates after her win

Her granddaughter Bella was on the floor with her and danced in her seat, waving her arms when Rep. Anna Eshoo voted for her grandmother.

Pelosi's grandchildren then gathered around her when it was Pelosi's turn to cast a vote for speaker. Pelosi appeared so engrossed with what was happening around her that she forgot to vote for herself. Her deputy, Steny Hoyer, nudged her to vote.

Bella grabbed her grandmother's hand and bounced in the aisles, jumping up and down, as she shrieked 'Pelosi.'

Freshman Rep.  Alexandria Ocasio-Cortez voted for Pelosi, as she said she would, leading to groans from the Republican side of the aisle.

There were a few dissensions in the Democratic ranks.

Rep. Conor Lamb voted for Democratic Rep. Joe Kennedy. Kennedy was spotted laughing when his name was called for speaker.

Pelosi entered the House of Representatives on Thursday with a thumbs up and followed by her grandchildren as she prepared to become the first person in more than 50 years to ascend to the speakership after losing it.

Recent speakers either quit - burned out as Republicans John Boehner and Paul Ryan were - or were forced out by infuriated members of their own party as Newt Gingrich was.

Pelosi, 78, made history in 2007 by becoming the first woman to lead the chamber. Now she returns to power as head of the Democratic Party and the second in line to the presidency after Mike Pence.

Nancy Pelosi gives thumbs up as she enters House chamber 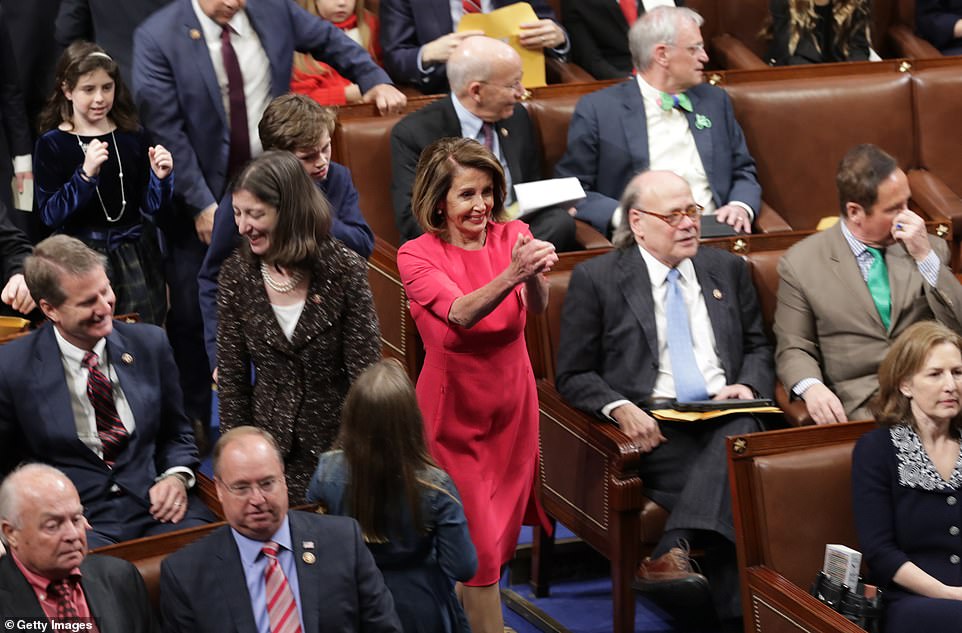 On her way: Nancy Pelosi walks to the front of the chamber of the House before taking part in a prayer as the new Congress prepares to vote on who should be Speaker - with her retaking of the gavel assured 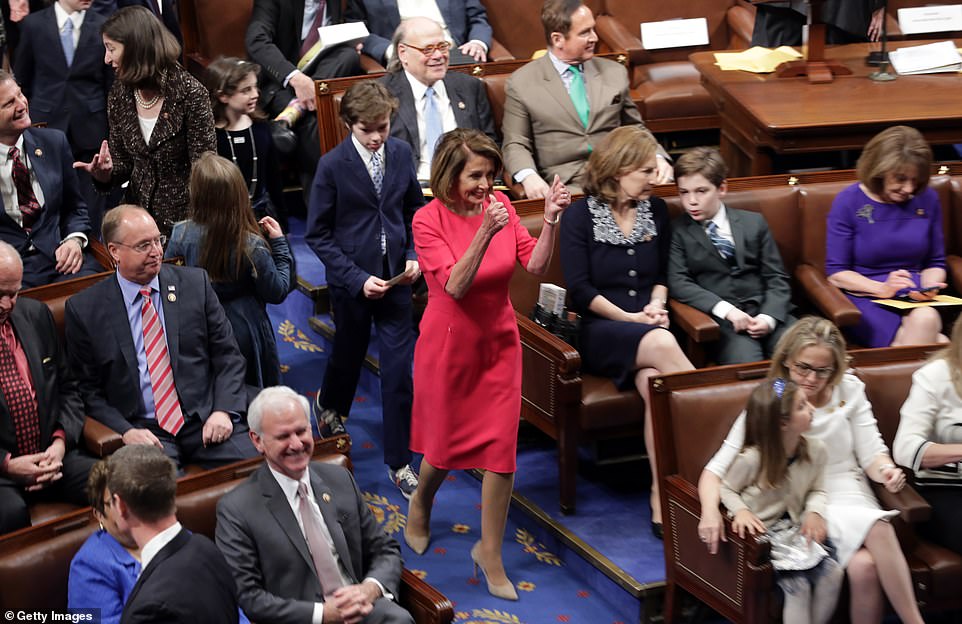 Family affair: Nancy Pelosi was followed down the aisle by two of her grandchildren as she prepared to take her seat - with a thumbs up gesture to other members of the House 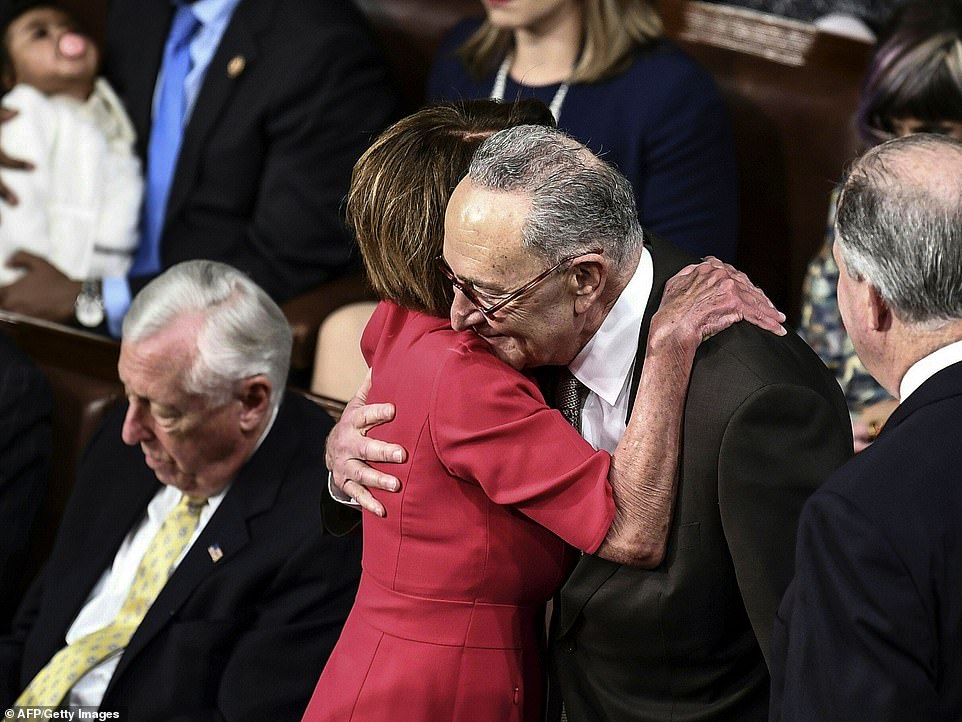 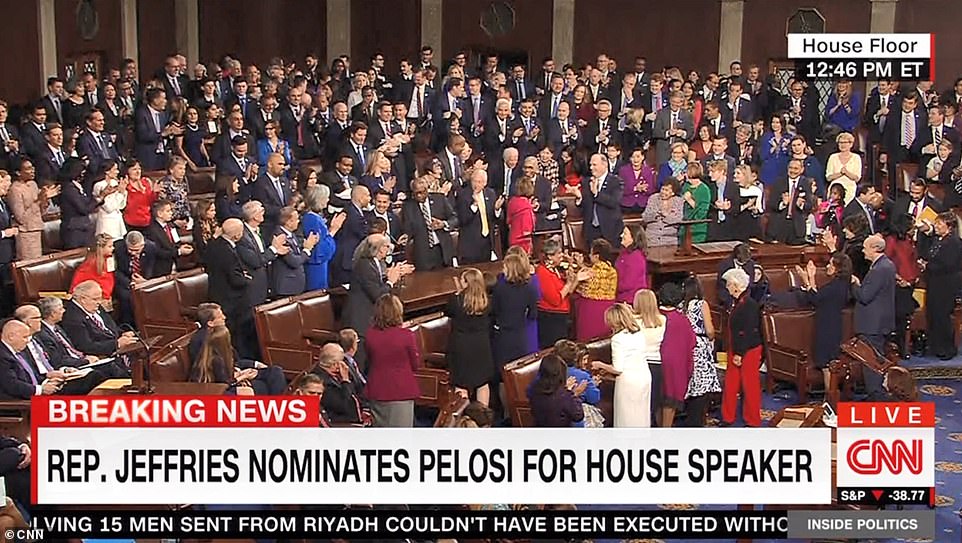 Democrats stood and cheered as Pelosi was nominated for speaker 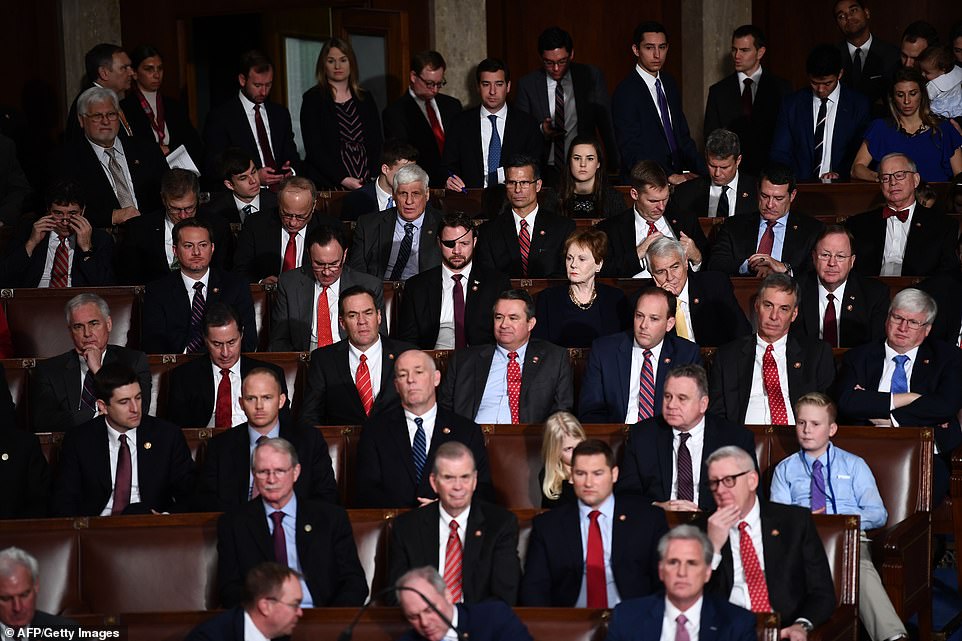 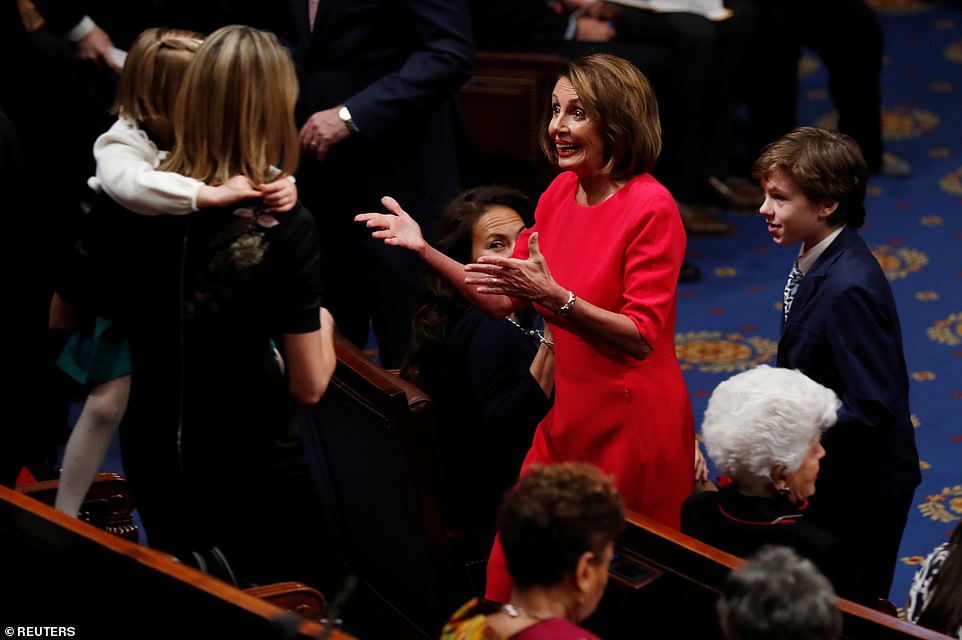 Back on top: Nancy Pelosi greets a child with her grandson directly behind her as she heads for her seat while the House gets ready to vote her in as Speaker 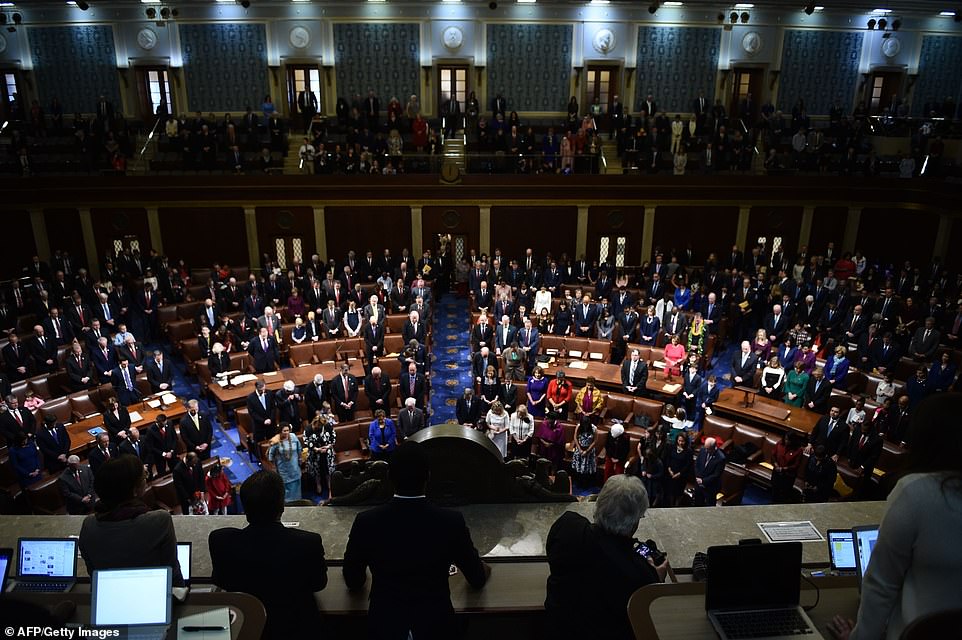 View from the top: Members of Congress get ready to start business with the Democrats in charge for the first time in the Trump presidency 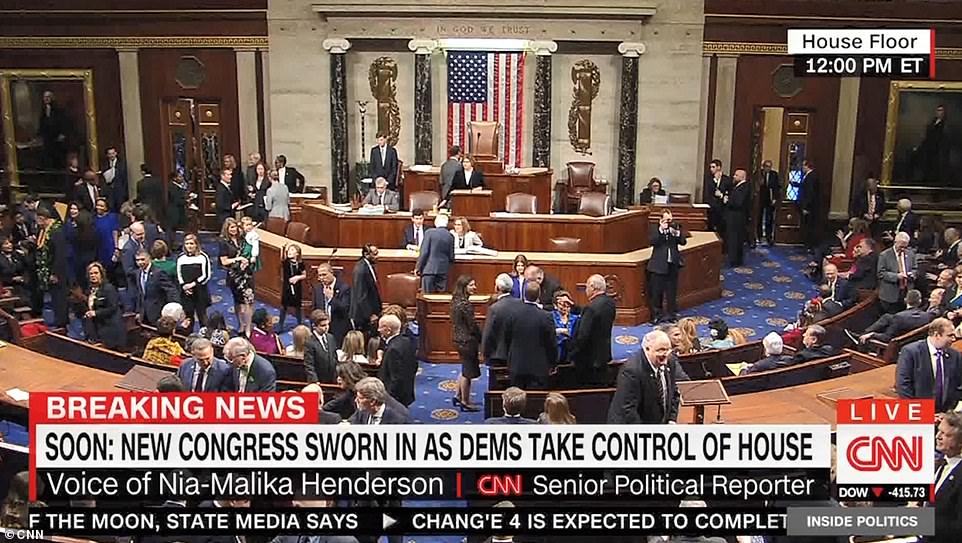 Moment of truth: This is the moment power was about to become split in Washington D.C. with a Democratic house about to take control 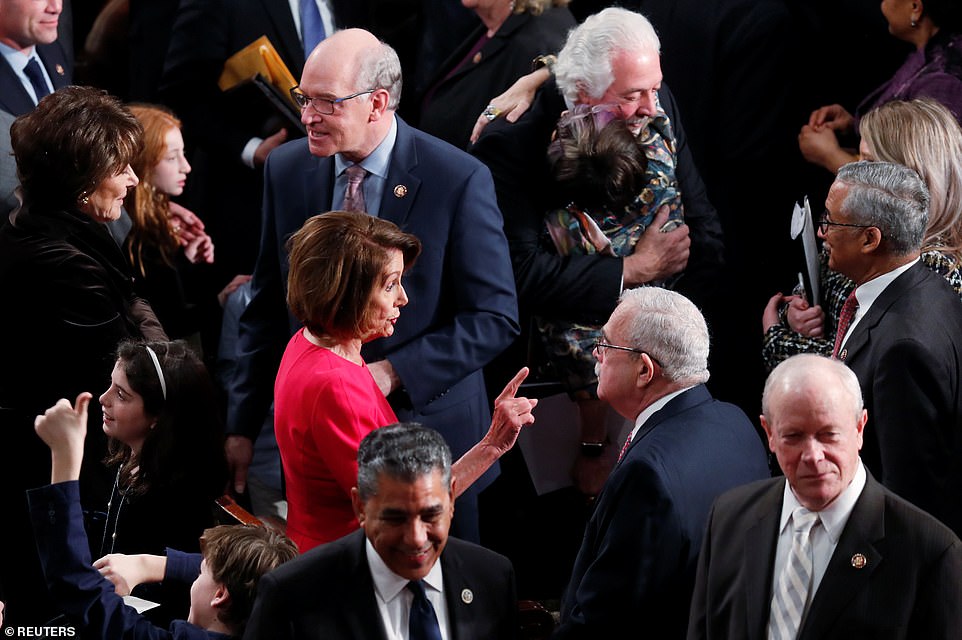 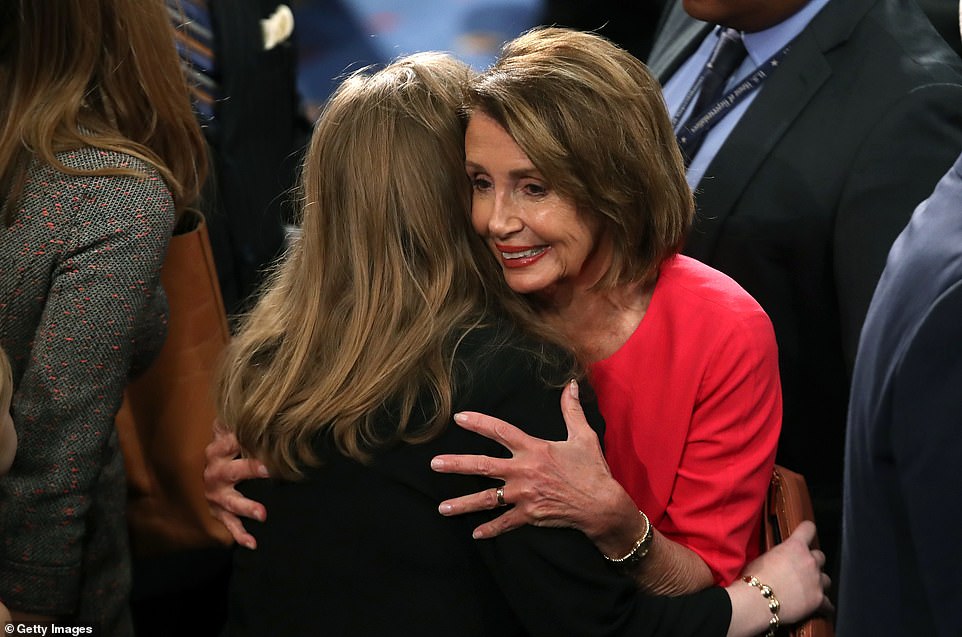 Hugs for the Speaker: Nancy Pelosi gets a very affectionate greeting as she makes her way to the front of the House of Representatives to take her seat for a prayer 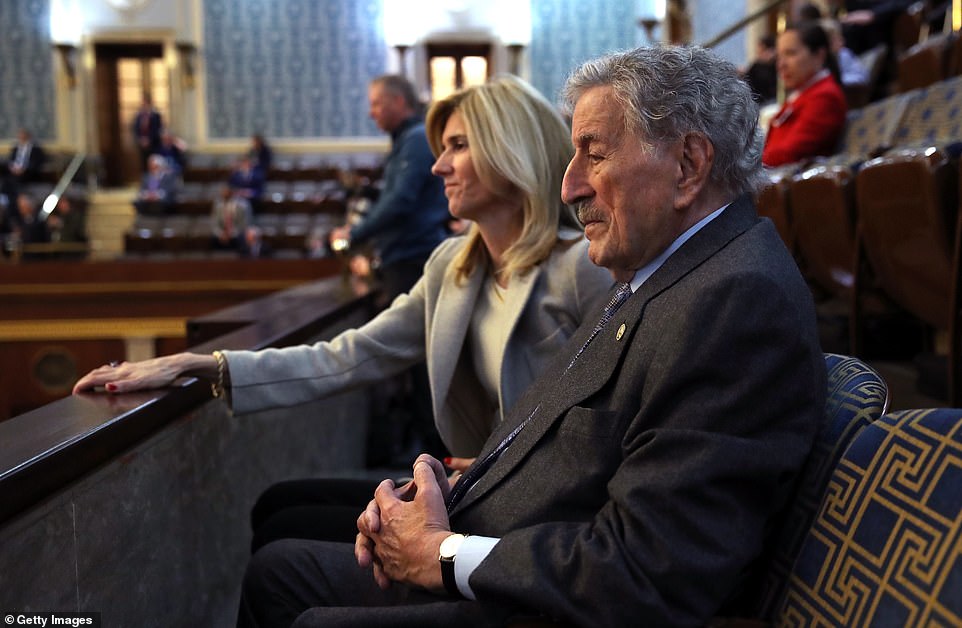 Guest of honor: Tony Bennett was in the Speaker's box with his wife Susan to watch Nancy Pelosi getting ready to take back the gavel. He serenaded her at a dinner on Wednesday night at the Italian embassy in Washington D.C. 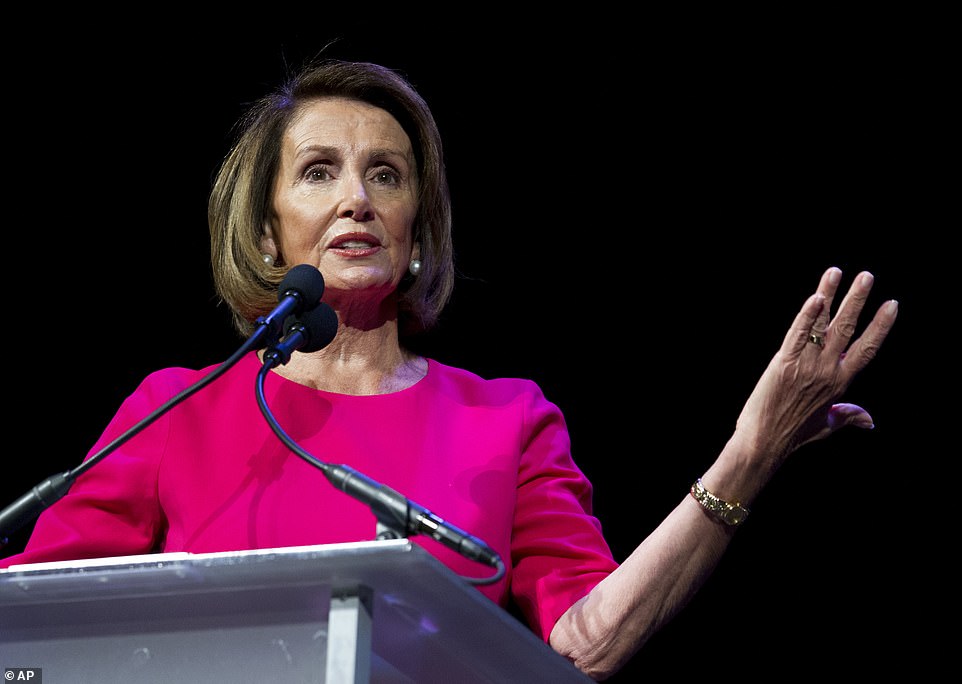 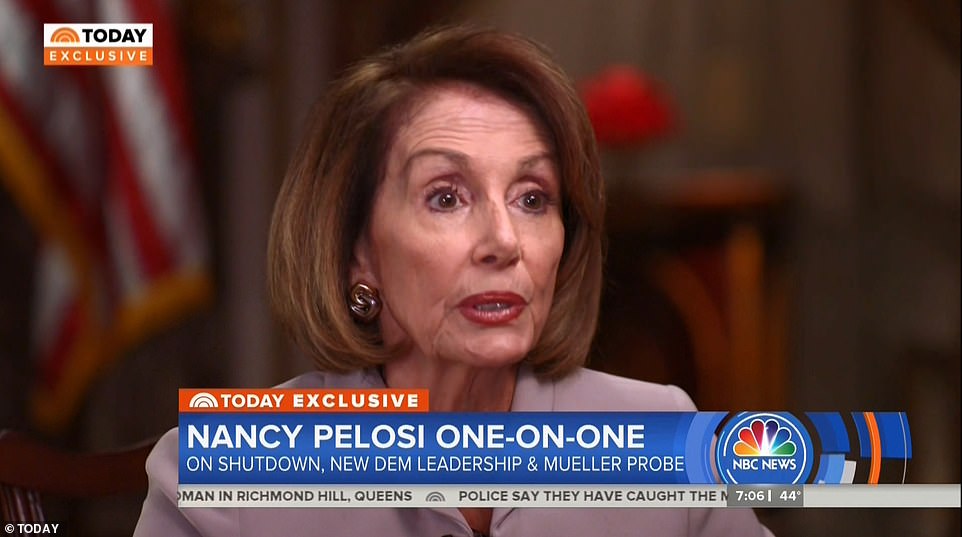 Pelosi has been on a media blitz to celebrate her return to the speakership; she appeared on the Today Show on Thursday morning 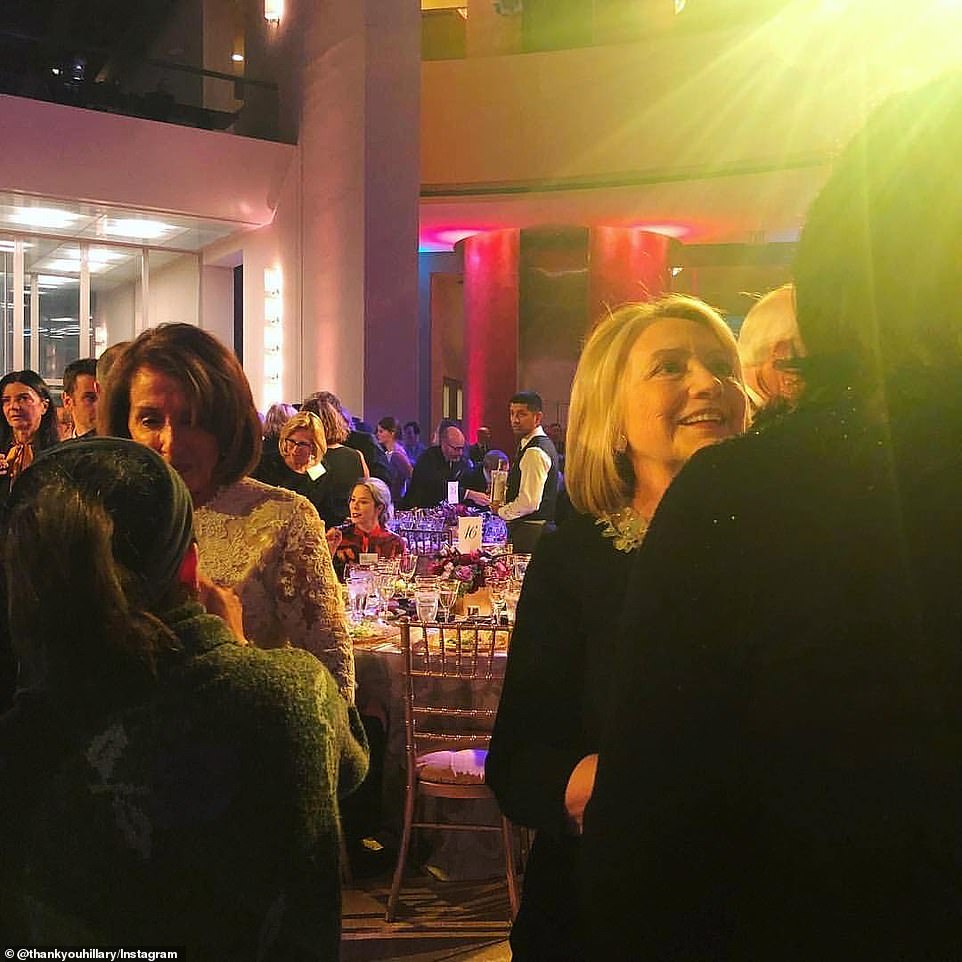 She will again face a Republican president down Pennsylvania Avenue.

But while she and George W. Bush had a cordial relationship, her tenure with President Donald Trump already has been marked by a shouting match in the Oval Office and a partial government shutdown.

Both sides are at an impasse over funding Trump's border wall as day 13 of the shutdown begins.

When the House of Representatives met at noon on Thursday to gavel in the 116th session of Congress, the first order of business will be to elect a speaker.

The first day for new lawmakers will be long on work and short on glamour.

The speakership vote took about an hour - a time period members are asked to stay on the House floor.

Several lawmakers brought their children to the House floor and several members held babies in their arms.

The Clerk of the House called for speaker nominations. Democrats put forth Pelosi and Republicans will nominate Kevin McCarthy, who will serve as GOP minority leader in the 116th Congress.

Then the House held a rare roll call vote.

Given its size - 435 members - the House uses an electronic system to vote up or down on legislation.

But the speaker's race is one of the few occasions when the clerk calls the names of every member to let them voice their vote. Each member is called individually, in alphabetical order.

In 2017, then-Democratic Rep. Kyrsten Sinema of Arizona voted for civil rights icon and Georgia Rep. John Lewis in what was seen as a protest of Pelosi.

Lawmakers also use their time to make a political point.

'Having been told Republican input was not wanted or needed in Obamacare, I vote for Paul Ryan,' GOP Rep. Louie Gohmert  said in 2017 when he cast his vote for Ryan for speaker.