Police in Mexico have arrested a suspected drug lord after cartel gunmen slaughtered three Mormon mothers and six of their children in a grisly ambush that left one vehicle torched and riddled with bullets.

The state prosecutor's office said one person was detained on Tuesday in the Mexican border state of Sonora and they were investigating whether they were involved in the massacre.

Nine members of the LeBaron family were attacked by cartel gunmen eight miles apart on Monday while traveling in a convoy of three SUVS on a dirt road.

The mothers were driving in separate vehicles with their children from the La Mora religious community where they live, which is a decades-old settlement in Sonora state founded as part of an offshoot of The Church of Jesus Christ of Latter-day Saints.

Rhonita Maria LeBaron and four of her children - her six-month-old twins, Titus and Tiana, her 10-year-old daughter Krystal and 12-year-old son Howard - were all killed.

A video posted on social media showed the charred and smoking remains of their vehicle riddled with bullet holes.

Another two mothers, Dawna Langford and Christina Langford Johnson, as well as Dawna's sons, aged 11 and three, were also all killed.

Details have since emerged of the heroic efforts of one slain mother to save her baby, as well as a young boy who protected his injured siblings and helped in their rescue. 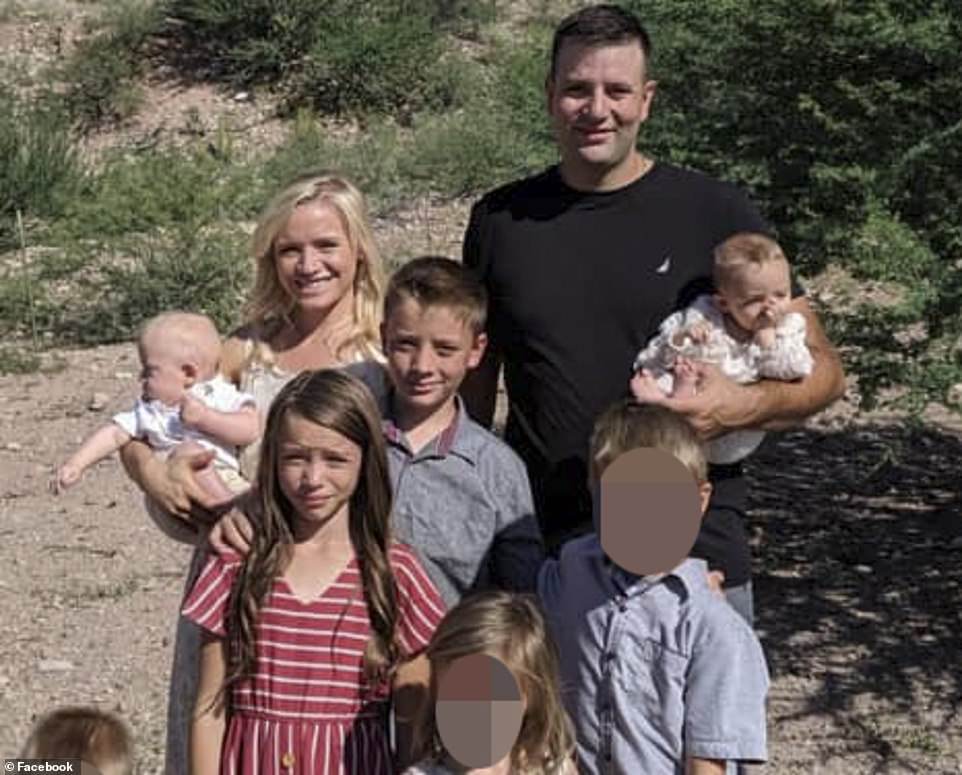 At least three American mothers and six children from a Mormon community based in northern Mexico have been massacred in an attack blamed on drug cartel gunmen. Maria Rhonita Miller was killed along with her six-month-old twins, Titus and Tiana (left and right), her 10-year-old daughter Krystal (left) and 12-year-old son Howard (center) 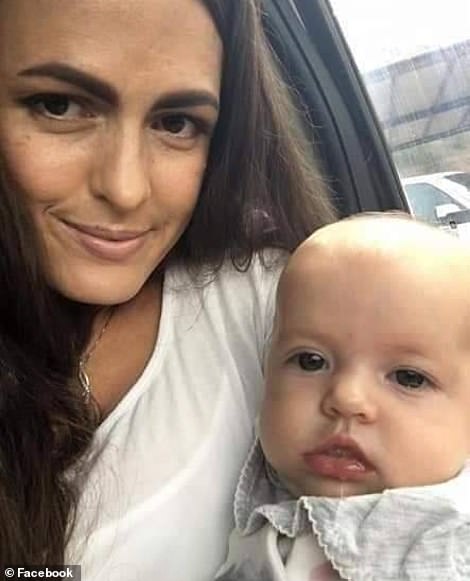 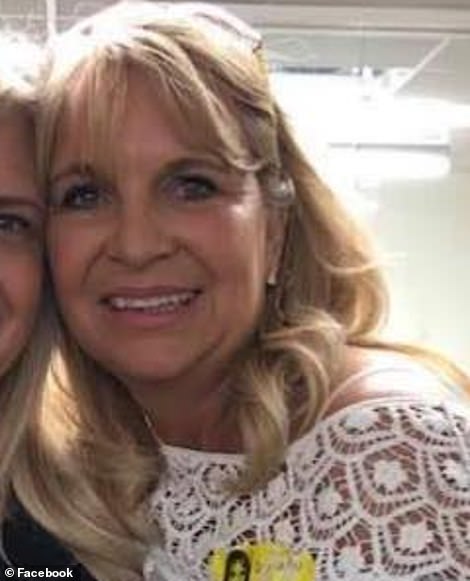 Christina Langford Johnson (left) and Dawna Ray Langford (right) were also killed traveling in two separate SUVs. Christina saved her seven-month-old baby Faith's life by throwing the infant to the floor of their SUV. Two of Dawna's children, Trevor, 11, and Rogan, 3, were killed in the attack 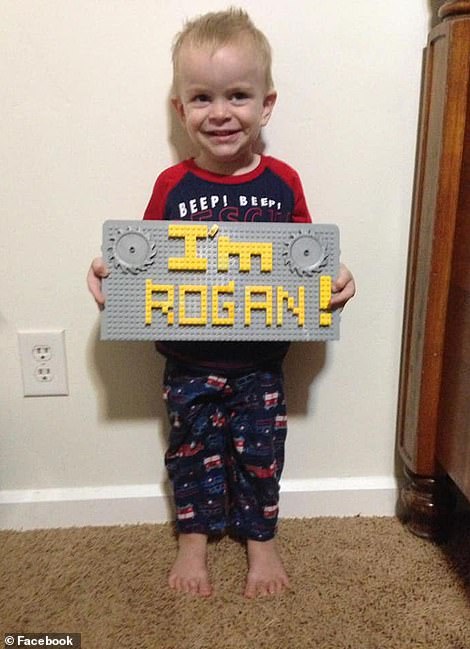 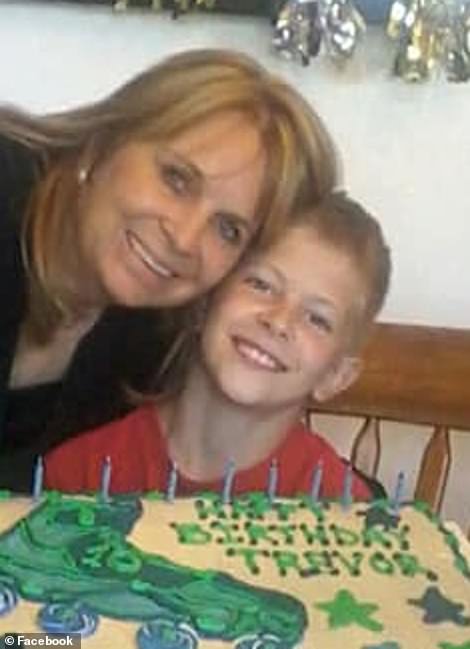 Family members say Rhonita was driving to Phoenix on Monday with her four children to pick up her husband at the airport following his work trip.

Relatives told DailyMail.com that her car broke down after she blew a tire. She returned to their community to get another car and set off again shortly before the other two mothers left.

Gunmen opened fire and torched her vehicle causing the gas tank to explode. She was killed along with her four children.

Christina and Dawna were traveling in separate SUVs with their own children.

They were en route to see family in the state of Chihuahua for a wedding that was scheduled for Friday, relatives told DailyMail.com.

Family members say Christina saved her seven-month-old baby Faith's life by throwing the infant to the floor of their SUV as bullets tore through the vehicle.

Seven of Dawna's children survived but some suffered multiple gunshot wounds, according to relatives.

One of her sons covered his injured siblings with branches while he ran back home for help. Relatives say he reached the community hours later.

Family members alerted authorities before arming themselves with guns to go out searching for the injured children.

They found Christina's baby, unharmed, still in her car seat on the backseat floor of the SUV. Dawna's five injured children were taken by ambulance to hospital. The three children who were not injured are now back home at the community.

La Mora is about 70 miles south of Douglas in Arizona. Many of the church's members were born in Mexico and thus have dual citizenship.

Five of the children who were injured were airlifted to hospitals in in Phoenix, Arizona.

Multiple family members, many of whom live in Utah, took to social media following the massacre to detail the horror scenes and pay tribute to their slain family members.

They say the gunmen opened fire on one child who was trying to run away. Relatives also feared some of the victims may have been raped.

Mexican Security Secretary Alfonso Durazo said the gunmen may have mistaken the group's large SUVs for those of rival gangs. 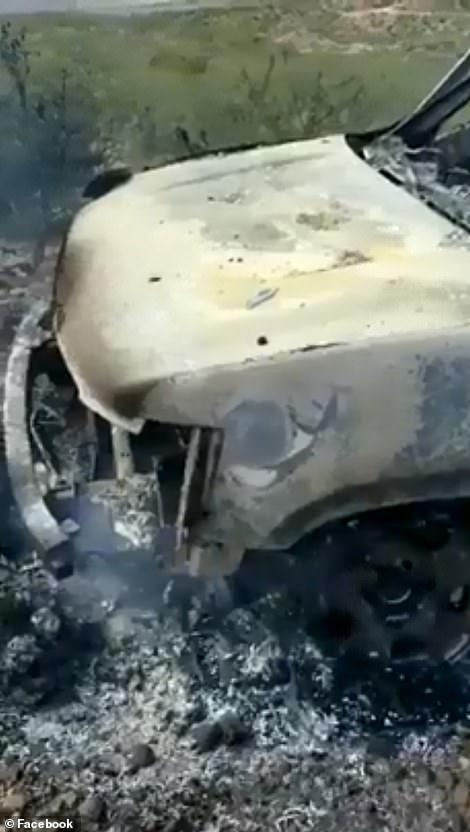 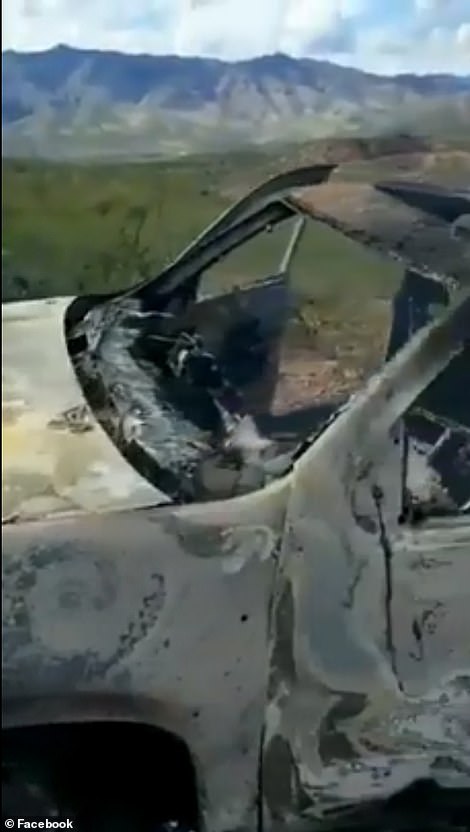 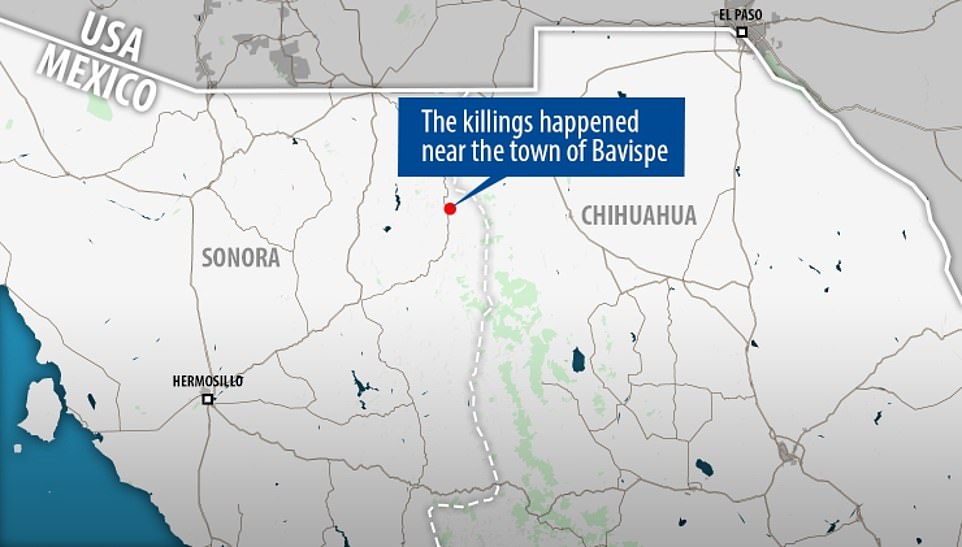 The slaughter of U.S. citizens on Mexican soil quickly became an international issue with President Donald Trump on Tuesday vowing to help Mexico wage a war on its drug cartels.

Mexico's President Andres Manuel Lopez Obrador said he would discuss security on Tuesday with the U.S. after Trump fired off a series of tweets. 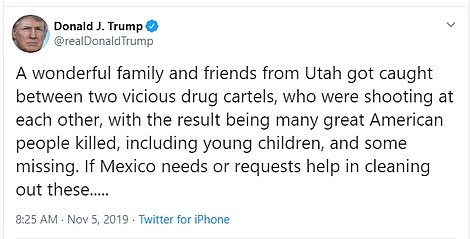 'This is the time for Mexico, with the help of the United States, to wage WAR on the drug cartels and wipe them off the face of the earth,' Trump tweeted.

Obrador, however, refused that approach, saying 'The worst thing you can have is war'.

Relatives have since been paying tribute to their slain family members and called on Trump to act.

'My beautiful niece.. I'm heartbroken I'm so so sorry you became a victim of the evil in this world. You will always be my angel girl. Hold your babies tight. Love you Dawna, Rogan and Trevor eternally #familieswillbetogetherforever,' Trish Cloes posted on Facebook.

'The evil might of had a plan on this earth but God has a greater plan for our family.'

She added in a later post: 'Dawna's children escaped with bullet holes in several places on their bodies. The children managed to get help under horrible circumstances.

'The children managed to escape with their baby brother. Baby was harmed with a bullet across his chest and through his arm. (Just got an update) This is a courage act of these innocent children.'

One of Rhonita's aunts, Brenda LeBaron, called on the U.S. to take action over the family's murder.

'I am totally heart broken right now over this. We need the U.S. to take invasive action right now. I have made a few calls already and I am getting hit with the same thing... The president of Mexico has to call Trump and give us permission to move forward,' Brenda told DailyMail.com 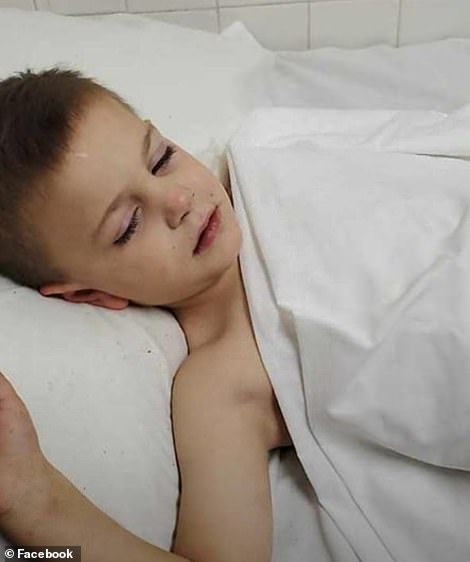 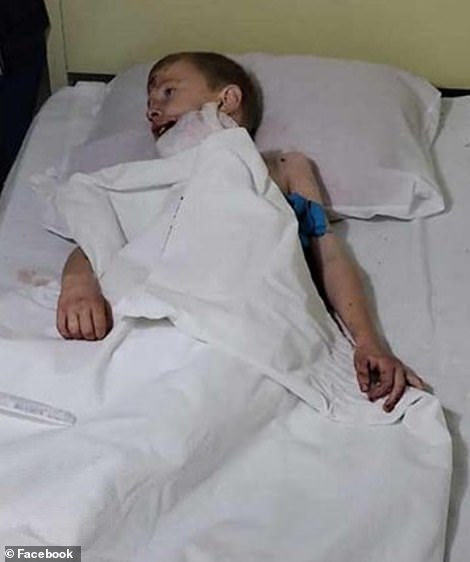 Dawna's injured children are pictured above in hospital. Brothers Xander Boe, 4, and Cody Grayson, 7, suffered gunshot wounds in the attack 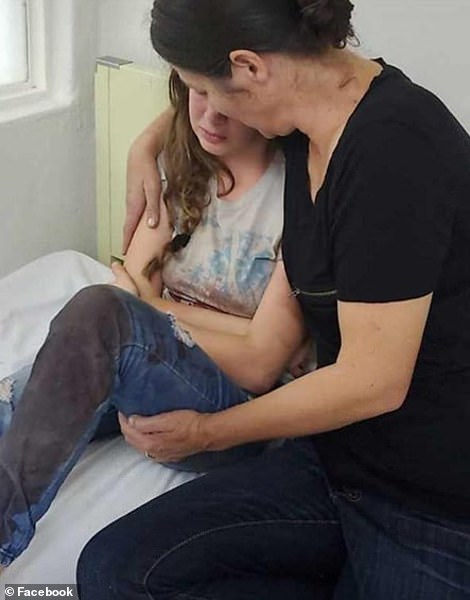 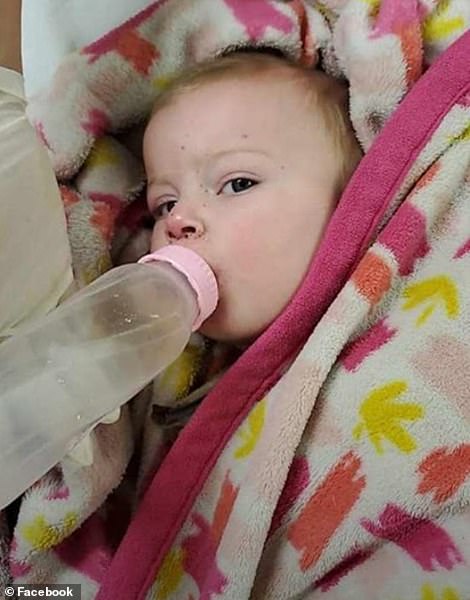 Dawna's injured children are pictured above in hospital. Kylie Evelyn, 14, is pictured left in hospital with blood soaked jeans as she is comforted by a relative following thew shocking attack. Brixon Oliver, 10 months, feeds from a bottle (right) in hospital alongside his siblings

Kenny LeBarón, a cousin of one of the women, told the New York Times: 'When you know there are babies tied in a car seat that are burning because of some twisted evil that's in this world. It's just hard to cope with that.'

Another relative, Lafe LeBaron, said the family had no help from authorities. He said family members from the community had risked their own lives by 'scrambling into the mountains to find our loved ones' after first finding out about the attacks.

Julian LeBaron, a relative and activist who has denounced criminal groups in the area, described the attack as a 'massacre'.

His brother, Benjamin LeBaron, founder of a crime-fighting group called SOS Chihuahua, was assassinated in 2009.

When asked who might be responsible, LeBaron said the attack took place in a 'war zone', home to drug cartels and 'thugs'.

The government deployed the army to fight drug trafficking in 2006, but experts blame the so-called 'drug war' for the spiraling violence between fragmented cartels and the military, which has lead to more than 250,000 murders.

His family 'may have been caught in crossfire or targeted by mistake, we don't know the cause,' he said, but added that the Mormon community had recently been the target of threats. 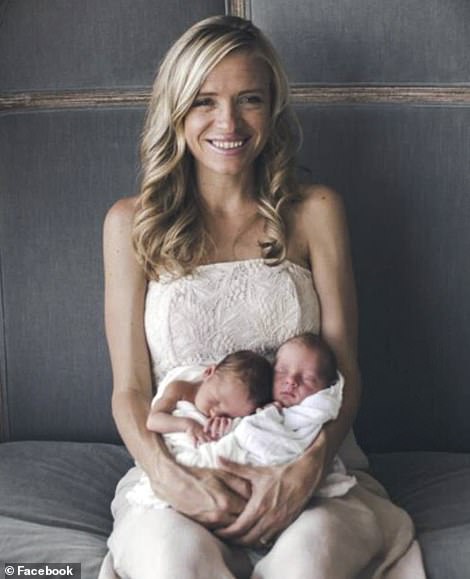 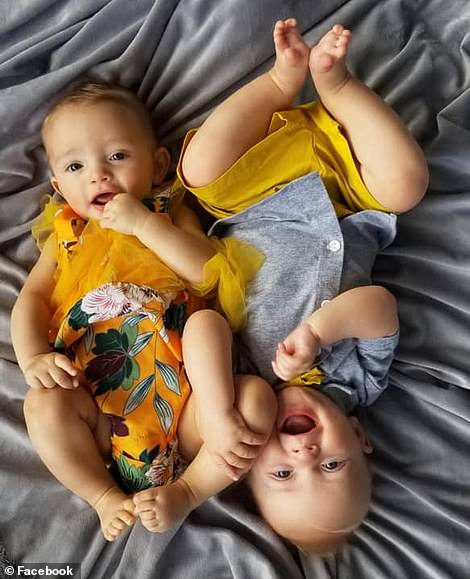 Family members say Rhonita Maria LeBaron (left) was driving to Phoenix on Monday with her four children to pick up her husband and then return to Mexico to celebrate their wedding anniversary. She was killed along with her twin six-month-old babies, Titus and Tiana, (right) her 10-year-old daughter Krystal and 12-year-old son Howard. 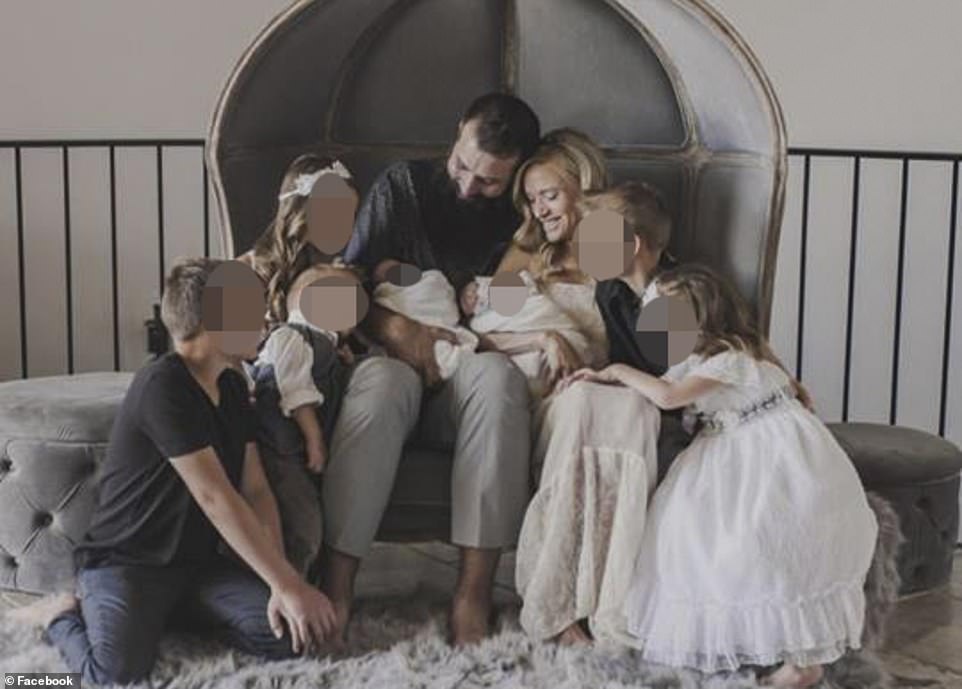 Rhonita Maria LeBaron was driving to Phoenix on Monday with her four children to pick up her husband and then return to Mexico to celebrate their wedding anniversary, relatives say 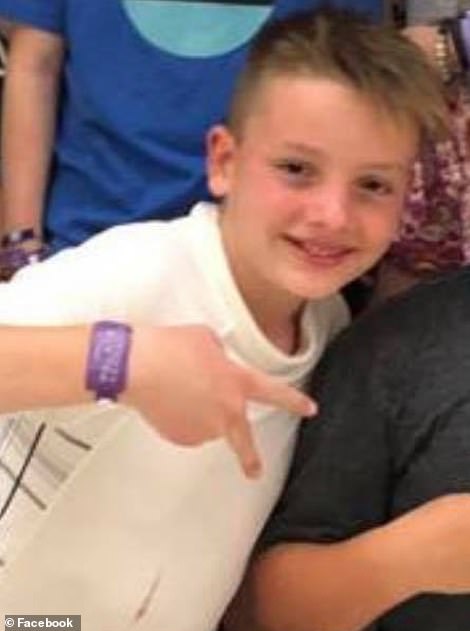 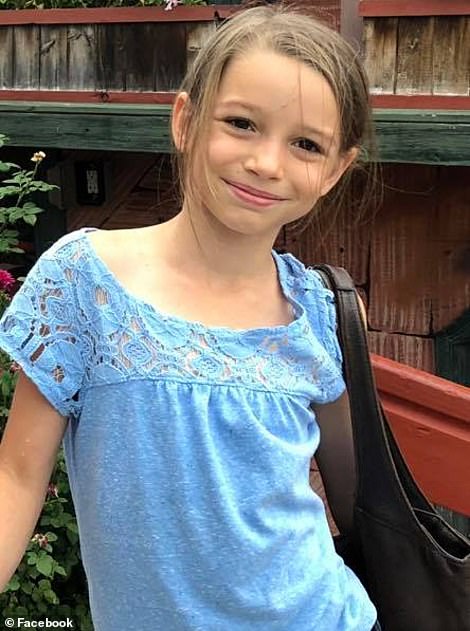 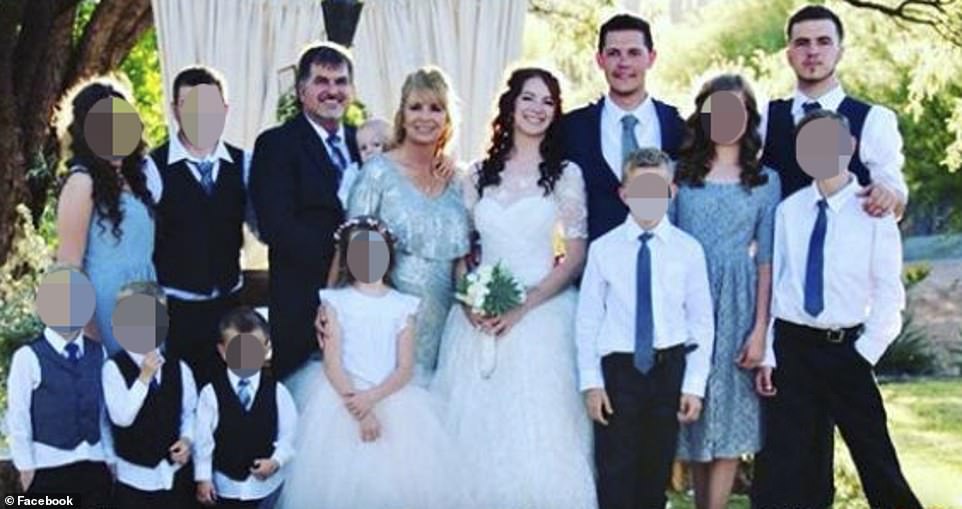 Dawna Langford (center blue dress) was killed along with two of her children. Seven of her other children escaped and the injured were later treated in hospital

The LeBaron family are part of a Mormon community based in the Mexican border state of Sonora.

They founded the group as part of an offshoot of The Church of Jesus Christ of Latter-day Saints. When the church abandoned the practice of polygamy in the late 1800s, some polygamous Mormons moved to Mexico to set up new colonies.

Alma Dayer LeBaron was one of them and set up the community with his family in 1924 after being excommunicated from the church.

Alma passed the leadership over to his son Joel when he died in 1951. He subsquently incorporated the community as part of Salt Lake City' Church of the Firstborn.

His younger brother Ervil was his second in charge at the time. The brothers later fell out over the leadership of the community and Ervil went on to set up another sect in San Diego, california in 1972.

While in prison, he wrote the 400-page commandment to kill disobedient church members who were included in a hit list.

Evril died in prison in 1981 but six family members organized 'four o'clock' murders, which saw an eight-year-old child and three former members shot dead within minutes of each other in Texas in 1988.

Authorities in Sonora state and the U.S. Embassy did not immediately respond to requests for comment.

Sen. Mitt Romney says he's been briefed on the slaying of nine U.S. citizens in northern Mexico and calls it 'a great tragedy' and something 'really unthinkable.'

The Republican from Utah said Tuesday that the attacks were probably 'associated with the business of the cartels' rather than a targeted attack on the U.S.-affiliated religious community.

He said he agrees with President Donald Trump that 'Mexico has to really knuckle down and go after some of these cartels and stop this escalating level of violence.'

Romney's own father was born in a similar but different group in northern Mexico. He said he doesn't know any of the people involved.

The federal Department of Security and Citizens' Protection said security forces were reinforced with National Guard, army and state police troops in the area following 'the reports about disappearance and aggression against several people.'

The U.S. Ambassador to Mexico Christopher Landau said in a tweet in Spanish that 'the safety of our fellow citizens is our top priority. I am closely following the situation in the mountains between Sonora and Chihuahua'.

Claudia Pavlovich Arellano, the governor of Sonora, said on Twitter late Monday that 'as a mother,' she was filled with deep pain by 'the cowardly acts in the mountains'.

'I don't know what kind of monsters dare to hurt women and children,' she wrote.

It would not be the first time that members of the break-away church had been attacked in northern Mexico, where their forebears settled - often in Chihuahua state - decades ago.

The colony was founded by Alma Dayer LeBaron who moved to Mexico as a breakaway from the Mormon church in 1924 after being excommunicated from the church for practicing polygamy.

When Alma died in 1951, he passed the leadership of the community on to his son Joel LeBaron, whose younger brother Ervil LeBaron, was his second in command.

When the brother's split, Ervil had Joel killed. He was tried and convicted in Mexico for Joel's murder in 1974. He died in prison in 1981.

In 2009, Benjamin LeBaron, an anti-crime activist who was related to those killed in Monday's attack, was murdered in 2009 in neighboring Chihuahua state.