BUCK: How do you know Democrats are worried about a governor’s race? Well, you see who they start to deploy. You see that they send in everybody, right? They send in the troops, so to speak. They send Biden, Harris — and, yes, even Barack Obama himself. Welcome back to the Clay and Buck show. You have Terry McAuliffe certainly feeling the heat in the Virginia governor’s race, as Clay and I keep telling you, because we think it’s important for the message to get out there across the country.

This would be a huge win, if Glenn Youngkin is able to pull it off, not just for the state of Virginia, but Virginia has become the front line of the battle over critical race theory teaching, over the transgender agenda being taught to kids at a very young age, and even over mask mandates and things like that. Parents who want a greater say in teaching and the apparatus of left-wing education controls are coming under assault, honestly for the first time in a long time in a meaningful way.

So they need to stop this because, “Oh, my gosh! If Youngkin beats McAuliffe in Virginia, some other states might get some ideas about this,” right? Virginia feels like a very blue state, unfortunately, because of the recent election. So this would be a pretty seismic win if it happens. So they put their top guys and gals on it, so to speak, and they’ve sent now — the Democrat National Committee.

They’ve sent down Barack Obama, because they still believe. It’s amazing. Obama was never actually successful in pushing for other candidates. If you look at the beginning of his win against Hillary Clinton back in 2008-2009, Obama’s personal charisma and the way the Democrats mobilized behind him didn’t translate to other candidates. In fact, it was the Democrat Party going into 2016 had been decimated in terms of statehouses and a lot of races that they lost. So he’s out there. But Clay and I want to focus on the case that he’s making here about the culture wars and how this is just a phony issue. Play clip 8.

OBAMA: We don’t have time to be wasting on these phony, trumped-up culture wars, the fake outrage the right-wing media peddles to juice their ratings. And the fact that he’s willing to go along with it instead of talking about serious problems that actually affect serious people, that’s a shame. That’s not what this election’s about. That’s not what you need, Virginia. Instead of forcing our communities to cut back at a time when we’re just starting to recover, we should be doing more to support people who are educating our kids and keeping our neighborhoods safe.

BUCK: Clay, how is it a phony issue?

CLAY: It’s not a phony issue, and I think one of the challenges is, everybody gets so caught up in their media silo in this day and age, particularly if you’re active in any way on social media, that you don’t really understand what is confronting real the people. So this situation in Northern Virginia surrounding a sexual assault and the fact that parents were labeled as domestic terrorists…

And that fell apart, by the way, really fast. The organization… I’m sure you saw over the weekend. If people missed it, the organization that called for the Department of Justice and the FBI to be involved in investigating school boards basically apologized for ever making that request in the first place. But I think what’s going on for a guy like Obama is, first of all, he still skated on that 60th birthday extravaganza absurdity, right?

BUCK: Where they were the “sophisticated, vaccinated crowd,” as it was said.

CLAY: That’s right. You become so wealthy, and at some point, you end up in your own bubble and you lose touch with what the reality is dealing with. Everybody listening to us right now, do you feel like they believe that many of these things are “phony, trumped-up culture wars” when you can’t get on the Twitter or Facebook or Instagram and say what you really think for fear of being fired? Buck, one of the things I love about my bus tour that I’m on…

And, by the way, we’re gonna be down in Jacksonville, Florida, this weekend at the Florida-Georgia game. I’m basically on a tour of the American South. That’s what I’m doing. I’m on the grassroots, face-to-face conversations. IT’s not hard to find me. People can come up; they can shake my hand. They can tell me anything under the sun that they want to tell me.

It puts you in touch with the real world in a way that I think very many people in media and politics and government are not in contact with the real world. So when I hear Obama speaking like that in Virginia, he’s not going to connect with any of the people that are facing real issues in this country right now, and he’s become such a poor representation of even what he was back in 2008. I think he may even have mentioned it. One of the things he used to talk about was he had been in grocery stores and gone around and bought milk, right?

BUCK: He’s been somebody who is going between his mansion in Kalorama and his $12 million mansion in Martha’s Vineyard for quite some time now. This is not a guy who has the common touch, so to speak. But I would say this. Clay, to call it “a trumped-up culture war issue”? The school board in Loudoun knew about and suppressed the sexual assault of a young teen girl in the bathroom. 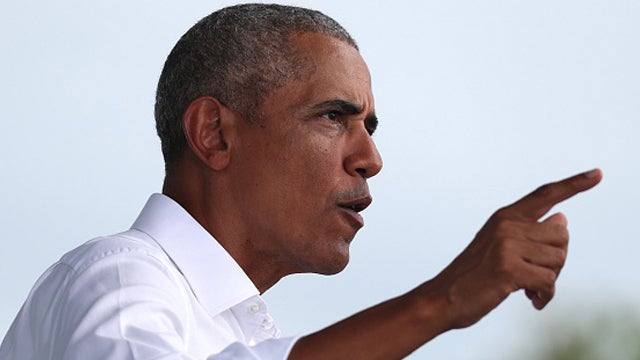 And then there was a further sexual assault by the same transgender individual, allegedly, and the school board didn’t want parents to know about this because they thought it was more important that biological boys be able to use the girls’ restroom and locker room — and, I’m sure, play on the sports teams and all of the relevant things. So they were willing to sacrifice the safety of a teenage girl — or teenaged girls in this case — because they had a broader agenda.

That’s not a “phony, trumped-up culture war,” and remember Barack Obama is the guy whose administration hounded the Little Sisters of the Poor, nuns, to make them pay for birth control that they clearly not only did not need themselves but also did not want to support when it came to their employees through Obamacare.

These are the same people, when you’re talking about Obamacare (and the rest of the elite Democrat left), who want to us use plural pronouns for single individuals, who think that Dave Chappelle’s comedy special should be pulled off the air. They want to talk about a phony culture war? They’ve gotta be kidding, right? The problem is they don’t like, Clay, when we fight back in the culture war.

CLAY: I think we’re starting to win, and that’s what’s really scary to them. Virginia could be an important signpost in that victory. But I think you’re starting to see a unique coalition of people fighting back against cancel culture, and the Dave Chappelle comedy special is a representation of that battle that’s going on.