For more than a month, local authorities and residents of a small rural community in Iowa thoroughly searched the surrounding area for Mollie Tibbetts, a young college student who’d gone missing while out for a jog.

A body that is believed to be hers was discovered in a corn field on Tuesday, not far from the woman’s hometown, pointed out to authorities by an illegal immigrant who confessed to police that he chased the young woman down and murdered her.

Unsurprisingly, many voices on the right immediately drew comparisons to the murder of Kate Steinle in California by an illegal immigrant — as well as thousands of other similar victims — and held up the horrific incident as proof that our nation needs to strengthen our border and immigration laws to prevent similar tragedies in the future.

Also unsurprisingly, many on the left sought to quickly dismiss or even ignore the tragic death of Tibbetts — an MSNBC pundit dismissed her as “some girl in Iowa” who was unimportant — in light of what they viewed as larger and more significant problems that needed to be addressed.

One of those who seemingly dismissed the murder of Tibbetts as not being a highly important issue was Democratic Sen. Elizabeth Warren of Massachusetts, who in an appearance Tuesday on CNN said the country needed to focus on “real problems” like the temporary separation of illegal immigrant families at the border.

To be sure, Warren did initially offer her condolences to the Tibbetts family. “I’m so sorry for the family here and I know this is hard, not only for the family but for the people in her community, the people throughout Iowa,” she said.

“But one of the things we have to remember is we need an immigration system that is effective, that focuses on where real problems are,” Warren added, implying that the murder of Tibbetts by an illegal alien was not a “real problem.”

“Last month I went down to the border and I saw where children had been taken away from their mothers, I met with those mothers, who’ve been lied to, who didn’t know where their children were, who hadn’t had a chance to talk to their children, and there was no plan for how they’d be reunified with their children,” Warren said.

“I think we need immigration laws that focus on people who pose a real threat, and I don’t think that mamas and babies are the place where we should be spending our resources,” she added. “Separating a mama from her baby does not make this country safer.” 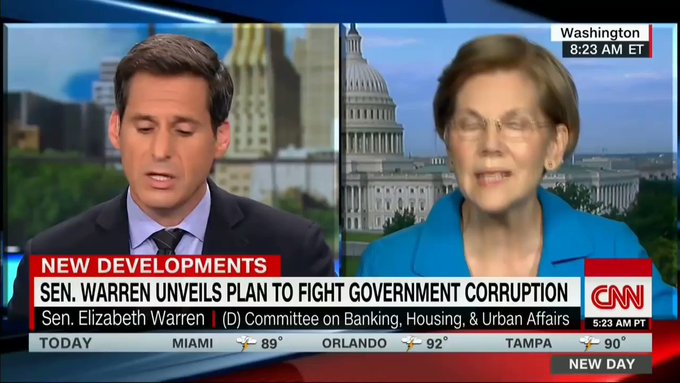 Reporter asks about Mollie TibbettsElizabeth Warren: I know this is hard for her family, but they have to remember that we need to focus on real problems like illegal immigrants not being able to see to their kids

Aside from the ghastly remark which implied that the murder of Tibbetts didn’t constitute a “real problem” worthy of much focus and attention, Warren also made a rather ignorant statement with regard to the temporary separation of children from their illegal immigrant parents at the border.

Does this remark by Sen. Warren reveals her true priorities in favor of illegals over citizens?

Those separations, tragic as they certainly are, are only temporary for the duration of the criminal proceedings the parents must endure after being caught illegally entering the country. Those families are later reunited once all is said and done, either here in America or back in their home country after deportation.

What Warren said that revealed her lack of self-awareness is in complaining about children being “taken away” from their mothers and the mothers who didn’t know where their children were or were unable to speak with them. While temporary for the illegal aliens, that separation is permanent for the mother of Mollie Tibbetts.

Tibbetts’ mother had her child permanently “taken away” from her by an illegal alien. She didn’t know where her missing child was for more than a month. She will never be able to speak with her beloved child ever again.

But, apparently, the concerns of illegal immigrant mothers temporarily separated from their children after they committed a crime is of more importance — a “real problem” — than the heartbroken concern of an American citizen whose child was permanently separated from the family by an individual who never should have been in the country in the first place.

In the end, we see that the Democrat talking point of being outraged over temporary family separations at the border takes precedence over the horrific murder of an American citizen by a criminal illegal alien.