Dr. Christine Blasey Ford‘s legal team has sent a letter to the Senate Judiciary Committee amid continuous negotiations ahead of Thursday’s scheduled hearing. 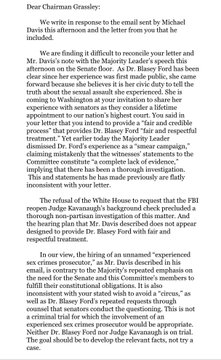 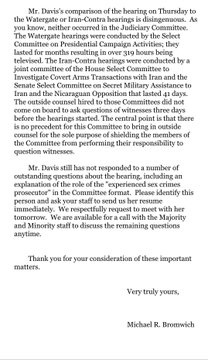 In new letter from Dr Ford’s Attorney to the Judiciary Committee, they again object to having outside counsel ask the questions for republicans at Thursday’s hearing, and ask for the name and resume of who that person will be.This does not appear to be a done deal.

“In our view, the hiring of an unnamed ‘experienced sex crimes prosecutor’ as Mr. Davis described in his email, is contrary to the Majority’s repeated emphasis on the need for the Senate and this Committee’s members to fulfill their constitutional obligations,” attorney Michael Bromwich wrote. “It is also inconsistent with your stated wish to avoid a ‘circus,’ as well as Dr. Blasey Ford’s repeated requests through counsel that senators conduct the questioning. This is not a criminal trial for which the involvement of an experienced sex crimes prosecutor would be appropriate.”

Ford’s team requested the identity of the sex crimes prosecutors the Committee would invite to the hearing along with their resumes.

The letter also blasts the the White House’s refusal to order an FBI investigation into Ford’s allegation.

“The hearing plan that Mr. Davis described does not appear designed to provide Dr. Blasey Ford with fair and respectful treatment,” Bromwich said.