When Christine Blasey Ford initially emerged publicly to allege Supreme Court nominee Brett Kavanaugh had sexually assaulted her while drunk at a high school party in 1982, she named several other individuals she claimed were also at the party and could corroborate her story.

One of those supposed corroborating witnesses was Leland Keyser, Ford’s lifelong and best friend from her high school days. But Keyser didn’t vouch for Ford, instead saying in an email to the Senate Judiciary Committee on Sept. 22 that she had no memory of the incident in question and had never met Kavanaugh.

The Washington Times reported Tuesday that the FBI, as part of its limited probe into the allegations against Kavanaugh, just interviewed Keyser and came away with the same uncorroborating account in relation to Ford’s allegation.

Prior to last Thursday’s committee hearing, during which Ford delivered her allegations under oath and Kavanaugh was provided an opportunity to respond, Keyser had already supplied the committee with a sworn statement disputing Ford’s naming of her as a supportive witness.

“Simply put, Ms. Keyser does not know Mr. Kavanaugh and she has no recollection of ever being at a party or gathering where he was present, with, or without, Dr. Ford,” Keyser’s attorney, Howard J. Walsh III, said in the email the committee.

The Times was informed by Walsh that Keyser had been interviewed by the FBI over the weekend and had given the bureau the exact same account she had provided to the committee — that she had no recollection of the alleged party and had never met Kavanaugh before.

“Ms. Keyser asked that I communicate to the Committee her willingness to cooperate fully with the FBI’s supplemental investigation of Dr. Christine Ford’s allegations against Judge Brett Kavanaugh,” Walsh said in a letter to the committee Saturday. 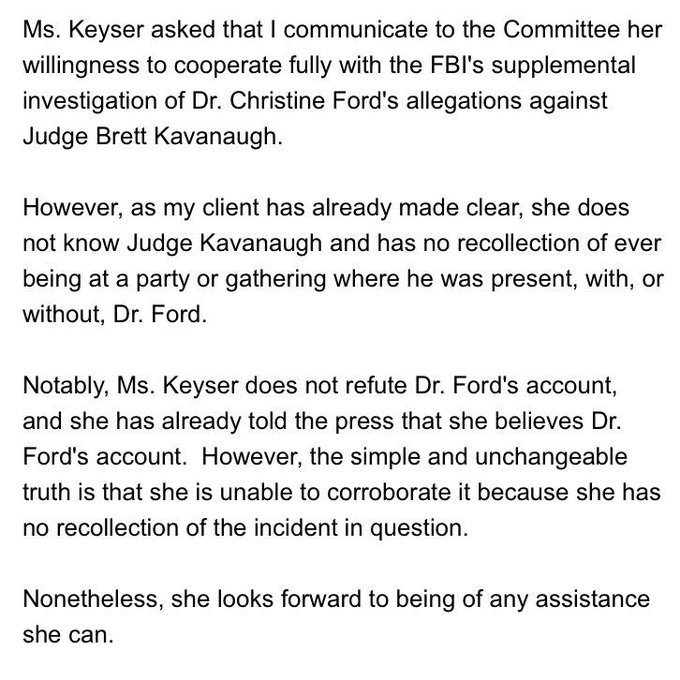 BREAKING:  letter to ⁦@senjudiciary⁩ Committee from atty for the female Dr. Ford says was at the 1982 party (Leland Keyser)

“However, as my client has already made clear, she does not know Judge Kavanaugh and has no recollection of ever being at a party or gathering where he was present, with, or without, Dr. Ford,” he added, reiterating what his client had already said in multiple sworn statements.

Do you think it is time to move on from these allegations against Kavanaugh since nobody can substantiate them?

On top of Ford’s best friend from school failing to verify her claims, the other individuals named by Ford have also delivered sworn statements that dispute Ford’s account or state no recollection of the incident she has described.

That would include Mark Judge, a friend of Kavanaugh’s who was marginally implicated in Ford’s allegations, as well as a man named Patrick “PJ” Smyth, who denied ever attending any such party as described by Ford.

As of now, everyone that Ford has named as being witnesses of, or having knowledge pertaining to, the alleged attempted rape she supposedly suffered at the hands of a drunken Kavanaugh have been not recollected or flatly denied.

Ford seemingly dismissed Keyser’s inability to recall the incident during Thursday’s hearing by suggesting that her friend was suffering from health issues and was too focused on helping herself to help Ford out.

“Leland has significant health challenges, and I’m happy that she’s focusing on herself and getting the health treatment that she needs, and she let me know that she needed her lawyer to take care of this for her, and she texted me right afterward with an apology and good wishes, and et cetera,” Ford said.

“So I’m glad that she’s taking care of herself. I don’t expect that PJ and Leland would remember this evening. It was a very unremarkable party. It was not one of their more notorious parties, because nothing remarkable happened to them that evening. They were downstairs.”

The FBI, as part of the limited investigation opened up as a condition of Kavanaugh’s passage out of the Senate Judiciary Committee, has dutifully interviewed the various individuals named in the allegations against Kavanaugh, yet thus far apparently has come up with nothing to substantiate the claims.

It remains to be seen if Democrats will be willing to accept an FBI report that clears Kavanaugh of the claims against him, or if they will simply move the goalposts once more and call for further delays, for some as yet unspecified reason, to continue their effort to keep him off the Supreme Court.