French police say at least 11 others injured by gunman, who has ‘been identified’ but remains at large

A gunman is reportedly on the run in Strasbourg after shooting two people dead and injuring at least 11 others in a terrorist attack near the city’s celebrated Christmas market.

Police said the lone gunman started his attack in the city centre just before 8pm where the market, which attracts millions of tourists every year, is taking place.

Witnesses said he had fired a first volley of rounds near the market around 8pm then a second a few metres further on.

“There were gunshots and people running everywhere,” one shopkeeper told BFMTV. “It lasted about 10 minutes.”

Several of the injured are reported to be in a critical condition.

A restaurant waiter told BFMTV how staff and customers tried to save a diner who stepped outside and was shot. “We used napkins to try to stem the blood.” He said the man had died. 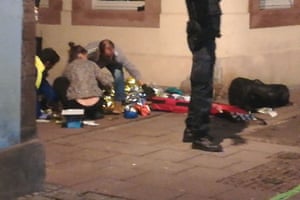 The anti-terrorist section of the Paris prosecutor’s office declared the incident to be an act of terrorism and announced an inquiry had been opened into “murder and attempted murder in relation to a criminal enterprise”.

France’s interior minister, Christophe Castaner, said the gunman “has been identified” and was known to police who were searching for him.

Police confirmed the gunman, aged 29, and born in Strasbourg, is on the national “Fiche S” list of people considered a potential security risk.

Officers said he had shot at soldiers patrolling as part of the nationwide Operation Sentinelle, reportedly injuring one of them. Sentinelle is a French military operation introduced in the aftermath of terrorist attacks in and around Paris in January 2015.

Police asked residents in the centre of Strasbourg to stay at home and restaurants were ordered to close and not let customers leave.

The European Parliament, which is currently sitting in Strasbourg, was put on lockdown, and the parliament’s safety awareness division sent a message to MEPs advising those dining in the city centre to “please stay inside and don’t go out”. 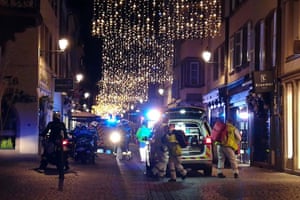 “[A] decision has been taken, as a precautionary measure, to close the European Parliament building in Strasbourg. We ask you to stay calm and safe within [European parliament] premises,” it read.

The transnational tramway between France and Germany was reported to have been suspended.

Several MEPs in city centre restaurants reported hearing gunfire. The Yorkshire and Humber MEP Richard Corbett tweeted that he was dining in the city “where shots (were) fired”. The restaurant was “not letting anyone in or out”, he added.

The local prefecture tweeted that people should avoid the area near the city’s police headquarters.

Police in Germany have said they are strengthening controls at the Franco-German border near Strasbourg. The police force of Baden-Wurttemberg, a state in south-west Germany bordering Strasbourg, tweeted they were taking the extra measures at the border because of the shooting.

France remains on high alert after suffering a wave of attacks commissioned or inspired by Islamic State militants in 2015 and 2016, which killed more than 200 people.

Strasbourg’s Christmas Market, which started in 1570, is one of France’s most popular seasonal events. The “Grande Ile” where the market is held is surrounded by water, on one side the main channel of the River Ill and the other by the Canal du Faux-Rempart, is only accessible by bridges. Since the Paris terrorist attacks in 2015, the event has been held under high security. Access to the area is controlled and visitors bags are searched. Vehicles are banned from the area.

In 2016, a truck was deliberately driven into the Christmas market in Berlin killing 12 people and injuring 56 others. The perpetrator Anis Amri, a Tunisian who had failed to gain asylum in Germany, was killed four days later in a shootout with police near Milan in Italy.

The attack comes during a period of intense tension across France after four weeks of civil unrest by anti-government and anti-president Emmanuel Macron, protestors from the gilets jaunes movement.

Macron cut short a ministerial meeting on Monday evening after being informed of the Strasbourg attack.