Border security is now so utterly cruel, barbaric and bigoted that Democrats are willing to shut down the government if President Trump requests funding for his border wall with the next budget.

In fact, not only have they shown willingness to shut part of the government down over it, but one very prominent member of the Democrat caucus is willing to get into a tickle fight with a skunk over it, as you may indeed have heard.

I personally don’t know why you’d want to forcibly make a member of the family Mephitidae giggle or why a fantastically rich House power broker from San Francisco is trying to spin a new country idiom, but there you go: Border security is bad. Very bad. It’s basically George Wallace lighting your money on fire and putting the foot of government on poor women and children from war-torn Honduras. (OK, it’s not really a war, but it’s privation, and isn’t that close enough for you, you heartless deplorable?)

Considering it’s all of these horrible things, surely the Democrats have always been opposed to it, right? Well, not so much. Back when it was politically advantageous and their base retained some semblance of reasonability on the issue, they were perfectly fine with it. And it wasn’t really that long ago, either.

Do you remember? Donald Trump sure does. 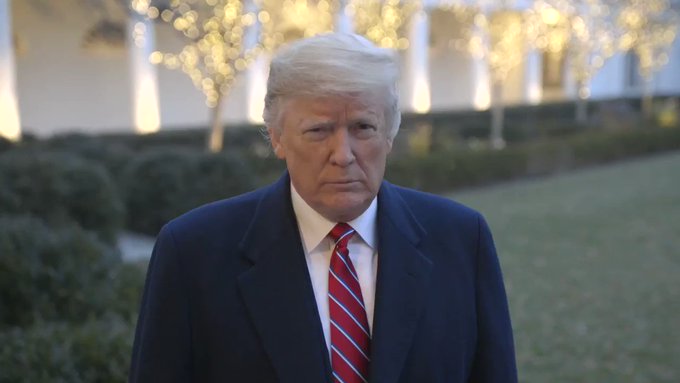 Let’s not do a shutdown, Democrats - do what’s right for the American People!

On Thursday, a few days after the aforementioned odiferous tickle fight and a little more than a week before the government is set to shut down, Trump posted a video to Twitter featuring what Democrats thought about border security back during the unenlightened era of just a few years ago.

There’s Senate Minority Leader Charles Schumer, one of the participants in White House Slugfest 2018. He’s more than willing to aid in shuttering parts of his beloved federal government next week if the president demands funding for the wall. Yet look what he had to say in the not-too-distant past: “Illegal immigration is wrong, plain and simple.”

Do you think there will be a government shutdown?

And then there was Hillary Clinton. She’s not involved in this fight in any sort of official sense, and thank God she isn’t. However, she’s certainly had some things to say about the wall since the election: “He is playing to his base — and his base was attracted to him for a number of reasons, one of which was his anti-immigrant rhetoric. And that was exemplified by the wall,” she told the U.K. Guardian in June.

“So the wall became more of a symbol than a real plan. He has now decided that he has to do whatever he can to get the wall, to satisfy the base. And I think, he has gone so far in that direction that he does things which are truly unimaginably cruel and unrelated to the outcome.”

Here’s what she had to say back in November of 2015, however: “I voted numerous times when I was a senator to spend money to build a barrier to try to prevent illegal immigrants from coming in,” she told a campaign audience.

Indeed she did — the Secure Border Act of 2006, which appropriated money for a fence, got 80 votes in the Senate, including Clinton’s, Schumer’s, Dianne Feinstein’s and Joe Biden’s.

It also got the vote of a young senator from Illinois just in his second year in the upper chamber, Barack Obama.

“We simply cannot allow people to pour into the United States undetected, undocumented, unchecked,” he said at the time.

His actions didn’t match the rhetoric, mind you, but at least he realized just how untenable the idea of a porous southern border really was.

“The Democrats are absolute hypocrites,” Trump is shown saying at the beginning of the video. “All along, they’ve been supporting walls and supporting fences and supporting all sorts of border security.”

Yes, well, now the idea of open borders (or, at least borders open enough to be electorally advantageous to the Democrats) is pretty much an entrenched part of leftist dogma. The president is right on the fact that the Democrats are hypocrites, but he’s wrong on another thing he said, that “they only don’t want to do it because of me.”

As the Democrats have been fond of saying, demographics is destiny — essentially meaning that they’re counting on minority voters to propel them to a numerical advantage in perpetuity. Leaving aside whether the logic behind this is sound or the prospect of treating minority groups as identitarian fiefdoms is immoral, this is the prime mover behind all Democrat policies involving border security. The law is fungible, after all, if it can be used to one’s advantage.