It all started with a tweet about a bike lane in New York, blocked by cars allegedly abusing placards to park where they shouldn’t. New York State Senate Majority’s deputy communications director Candice Giove dug a little deeper and claimed that one of the placards belonged to Sen. Parker — but the vehicle was not the same one to which the placard was legally assigned.

It got to the bottom of this. The placard  is assigned to @SenatorParker. However, the license plate # on the placard does not match the vehicle. So he either used it in another car or gave it to someone to use, both of which are not permitted.

The whole of the 2nd ave bike lane btw 43rd and 44th is blocked by @placardabuse-rs, like this arrogant scofflaw from @NYSenate. Total assholes.

Parker responded with the now-deleted tweet instructing Giove to “kill” herself. 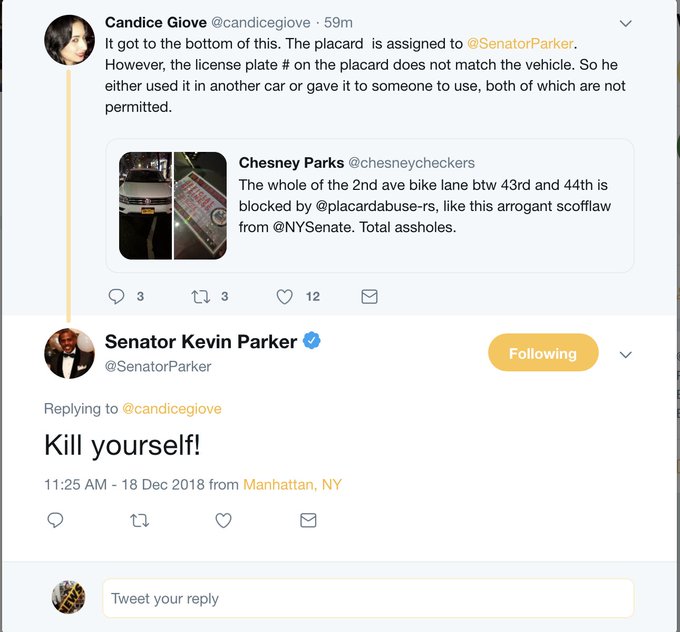 Amid the backlash, Parker offered an apology after deleting the tweet, conceding that he should not have joked about so serious a topic as suicide.

Did a Senator just write this to me?

I sincerely apologize.  I used a  poor choice of words.  Suicide is a serious thing and and should not be made light of.

Not long after he apologized, however, Parker went right back to attacking Giove, saying that she was “on the wrong side of history for every important issue facing New York State.” (RELATED: New York State Senator Tries To Clarify ‘White Guys’ Comment)

Where was @Candicegiove when NYers voted for a #Democratic State Senate & progressive legislation like the Dream Act & CFE funding? That’s right, working with the #NOIDC appendage of the GOP.  #DreamAct #CFEFunding

. @Candicegiove is on the wrong side of history for every important issue facing New York State!

In an especially ironic twist, Parker is one of the leading voices on a bill that would require anyone who wanted to legally purchase a firearm to surrender their social media history for review.

Parker hasn’t said whether that review would include deleted tweets.