One-hundred-eighty-six more migrants were released in downtown El Paso, Texas by U.S. Immigration and Customs Enforcement on Christmas Day, reports the CBS affiliate there, KDBC-TV. That came after approximately 400 were released in the southwest Texas city in the two days before Christmas.

Democratic Congressman Beto O'Rourke, who represents El Paso, said he'd been told some 500 more would be released there Wednesday.

Local nonprofit groups told the station the key difference Tuesday was that they were notified in advance by ICE of the mass release, something the groups and O'Rourke said didn't happen previously.

As a result, the nonprofits were a bit more prepared for the large influx.

Day three of mass releases by ICE in #ElPaso. On this #Christmas day these three boys are enjoying some sweets. Their parents gave us permission to take their pictures. So far about 160 have been brought here. Waiting on another 40.

"They're coming from immigration cells so they're coming hungry, they're coming thirsty, most haven't bathed in a long time. The situation is really difficult for them," said Dylan Corbett, executive director of the Hope Border Institute.

ICE said in a statement earlier this week the mass releases were designed to ensure families weren't held longer than it's allowed to detain them, and blamed "decades of inaction by Congress" that resulted in the government being "severely constrained in its ability to detain and promptly remove families with no legal basis to remain in the U.S." 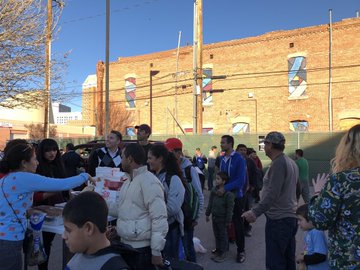 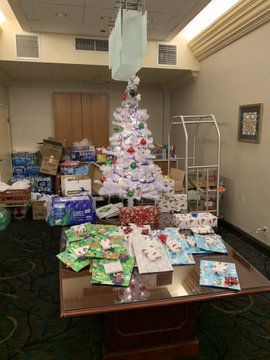 Many thanks to volunteers & donors who ensure that we take care of families being released by ICE in El Paso. 200 to be released today. Over 500 tomorrow. Please make a donation that will go to food and beds here: https://annunciationhouse.org/financial-donations/ …

The immigrants released Tuesday by ICE were dropped off at a downtown El Paso bus station. Then, they were led by volunteers to a makeshift headquarters at Rock House Cafe and Gallery, a block away.

"We made something for (the migrants) for breakfast. We went to buy some bread and my sister went to her closet to look for things that we could give away. We are here to give what we have," Michelle Sanchez said.

One of thle migrants said, "It's unreal, like a dream. They gave us clothes, food, everything. I really didn't expect this, thank you so much."

O'Rourke said about 500 migrants are expected to be released Wednesday.

After waiting at the café, the migrants were taken to local shelters in city buses.